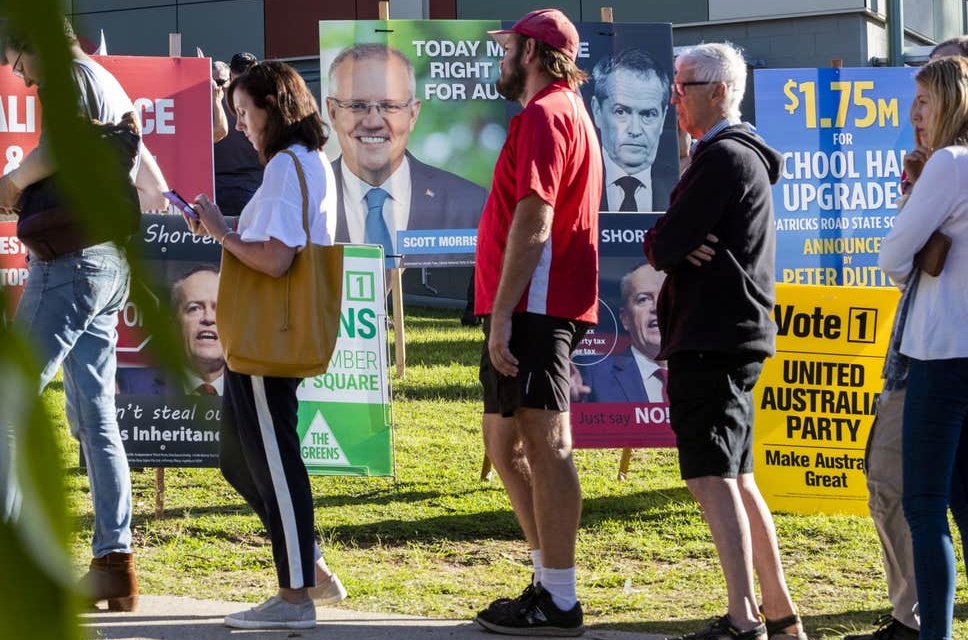 Australians wait to vote in Brisbane, Queensland, May 18, 2019

Last Saturday, Australians – myself among them – voted in a federal election. In contrast to Britain’s experience, turnout was 82%, in part because Australia is one of a handful of countries to enforce compulsory voting.

Whenever Australia’s high turnout is discussed in the UK, it leads to questions: is compulsory voting the answer to low participation in the UK? Would its introduction change the nature of the British political system?

As a dual British/Australian citizen who is registered to vote in both countries, my answers:

But second, it is not be enough to fix the UK’s broken system.

Compulsory voting forces Australia’s electoral commissions to make voting as easy as possible. There is simply no way Australians would put up with compulsory voting if casting their ballot was an inconvenience.

In addition to postal voting, Australians have the option of casting their vote at early voting centers, up to 3 weeks before the election. On Election Day, Australian voters can cast their ballot at any polling place in their state or territory. This is a significant bonus for commuters or those with unpredictable work schedules, who in the UK might struggle to find time to get to their designated polling place. In some State elections, online voting is also an option. In the last state election in New South Wales, I voted electronically while conducting fieldwork in Malawi – it took less than five minutes.

Making voting more convenient has important benefits for inclusivity and accessibility. In Australia’s federal elections, voters who are blind or have low vision can cast their ballot through a telephone voting service. In contrast, a High Court judge recently ruled that the UK’s arrangements for such voters were “a parody of the electoral process” because they did not allow vision-impaired voters to cast their vote independently, violating their right to cast their ballot in secret.

Despite all this, compulsory voting alone would never be enough to revitalize public enthusiasm for elections in the UK. This is because the roots of Britain’s lower voter turnout lie much deeper. In short, too many people in the UK are used to their vote making absolutely no difference at all. In large part, this a product of the UK’s first-past-the-post system, which means that whoever gets the most votes wins. For those of us – including myself – who live in seats very safely held by one party, this makes it difficult to see the point of voting. The result is a foregone conclusion.

Given this, it is difficult for an outsider like me to understand why UK voters so resoundingly rejected a shift to alternative voting in 2011. That system would have allowed voters to rank candidates in order of preference, instead of selecting a single option. This had the potential to open up space for smaller parties, reducing the need for tactical voting and making a larger number of constituencies genuinely competitive.

Much of the logic for rejecting alternative voting seems to have been along the lines of “if it’s not broken, don’t fix it”. The problem, however, is that the current system is broken. A recent report found that more than two-thirds of the UK public do not feel that they are represented by the main political parties, while trust in politicians remains at record lows. A survey by the Hansard Society found that 72% of people thought that the UK’s democratic system needed “quite a lot” or “a great deal” of improvement.

The good news is that this dissatisfaction creates opportunities for change. It is time for a renewed debate about whether the UK’s electoral system is fit for purpose. It is time to look at options for reform with fresh eyes. Australia’s experience suggests that compulsory voting might be helpful, but is no magic bullet.

Ultimately, what the UK needs is an electoral system that is more inclusive and more accessible — a system which gives people faith that their votes just might make a difference.