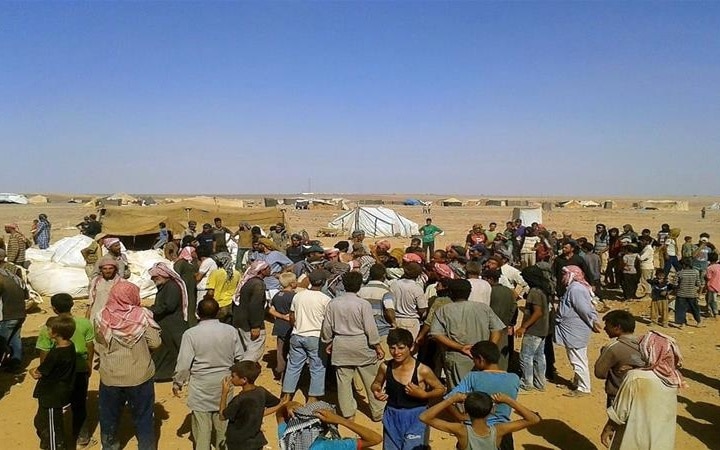 Displaced Syrians in the Rubkan camp near the Jordanian border (File)

Following Friday’s story on EA, the UK Foreign and Commonwealth Office has recommended an investigation of the reported executions of three men who left the Rukban camp for displaced Syrians.

Emily Maltman, the head of the UK’s Syria Office, tweeted:

If true, this is a shocking report that needs urgent impartial investigation.

It would make it impossible for anyone to promote IDP or refugee returns to #Syria.

We need a real, #IHL compliant plan for the people in #Rukban . And they need aid now. https://t.co/vFsQrIi51r

Emma Beals, the editor of Syria Context, has written a Twitter thread about both the conditions in Rukban and the threat to those who leave: “Imagine, 3 years later, still in the godforsaken camp with no aid and your only choice is to go to an ‘IDP shelter’ and watch someone be shot by the people whose bombs you fled to begin with.”

Yesterday, local sources said three young men were executed in one of the 'IDP shelters:' https://t.co/u7JBOxfnwP. They also report that conditions in the shelters are appalling. Men must stay and reconcile their affairs while women and children are able to leave after some time

But, despite news of the executions, more residents have reportedly left Rukban because of the severity of shortages:

Video of more people allegedly leaving Rukban camp because they have no food due to siege by the regime and russia. pic.twitter.com/rPA6BLTXhF

ORIGINAL STORY, APRIL 12: Three men who left the besieged Rubkan camp in southeast Syria have been executed by Assad regime personnel, according to local sources.

After months of regime siege and Russian pressure and propaganda, between 1,700 and 2,000 residents have left Rukban in recent days. They gave in because of lack of food, medicine, and basic supplies, which have led to the deaths of scores of residents since last autumn; however, the displaced have expressed concern about returning to home areas because of detentions, forced conscription, and intimidation as well as uncertainty over the status of their property.

Those fears appear to have been borne out by the executions on Wednesday. The three men were in a camp in Baba Amr in Homs city, where displaced were taken by “green buses” known for forced removals of civilians and rebels. The sources, also in Baba Amr, sent news to those still in Rukban.

“Everyone, even women and children, witnessed it [the executions],” one source said.

Another explained, “When Russian forces are present, they [regime personnel] pretend to be good. Once they leave, the torture starts.”

The sources added that women and children are being allowed to leave the detention facility in Baba Amr, but men are being held.

More than 40,000 displaced Syrians live in Rukban, in a barren area near the Jordanian border. The Assad regime cut routes into the camp last autumn, and has only allowed two aid convoys since January 2018.

Russia has supported the siege with propaganda, blaming “militants” and the US military — Rukban is within a 55-km security zone around the US base at Tanf in eastern Syria — for the deprivation and deaths. Moscow has stepped up demands for the “liquidation” of the base with return of residents to home areas which they fled in 2015, amid Islamic State attacks.

In a press briefing on Thursday, a senior UN official said the organization has no presence inside the detention facilities.

Najat Rochdi, the humanitarian advisor of the UN’s Syria envoy, again repeated the call for “a durable solution for the population in Rukban… given the dire humanitarian situation” amid the siege.

Rochdi reiterated the need for “protection guarantees” for those who want to leave, but said, “The UN has not been directly involved in these evacuations.”

She added, “So far, the UN has not been granted access to the places of return.”

Asked if the UN had any information about conditions for those who have left, Rochdi admitted, “Well, no”:

We got also some guarantees, without being able to verify anything, that there won’t be any persecutions or any security issues for them to return there, but we are still advocating for us to still get access.

However, rather than focusing on the concerns over safety, Rochdi preferred a focus that the fears might not be fulfilled:

If the return of Rukban people to their areas of origin is happening very well, that’s a wonderful opportunity to convey a very positive message and a positive narrative to all Syria so people can start hoping again and believing again, and somehow building trust. So Rukban is a test case for everybody.

Russian State media made no reference to the conditions in the detention centers. Instead, the head of the Russian “Center for Reconciliation” in Syria, Maj. Gen. Viktor Kupchishin, alleged on Wednesday that between 10 and 20 people are dying each day in the al-Hol refugee camp in northeast Syria.

The camp is overseen by US-supported, Kurdish-led Syrian Democratic Forces amid their defeat of the Islamic State. The population has been swelled, beyond 45,000 residents, by those who fled the last ISIS-held areas as well as families of ISIS fighters.

With no sense of irony, Kupchishin said the Syrian government had provided security guarantees to any displaced leaving al-Hol.