TrumpWatch, Day 813: Trump to Border Chief — I’ll Pardon You if You Break Law 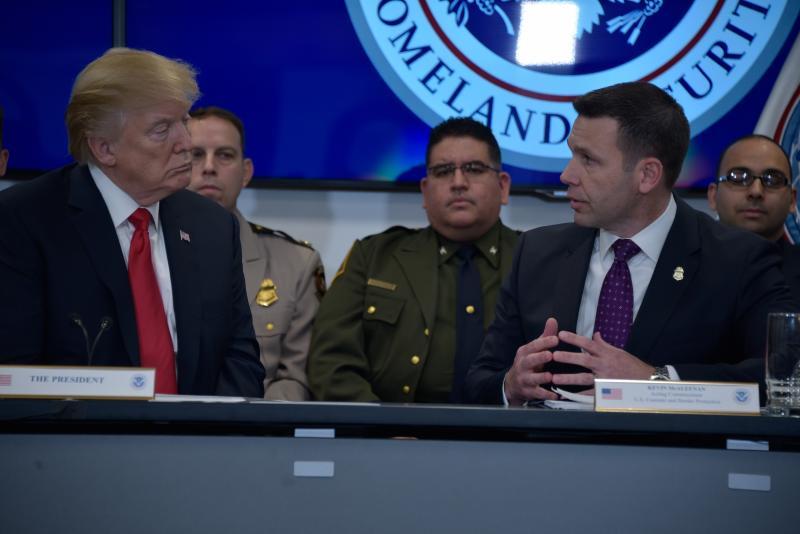 Donald Trump has told Customs and Border Protection Commissioner Kevin McAleenan that he will be pardoned “if he ever went to jail for denying US entry to migrants”.

According to “senior administration officials”, Trump told McAleenan that he can order border agents to block asylum seekers from entering the US. The action would violate American laws that allow migrants to claim asylum at a port of entry.

Trump made the comment during a PR visit last week to the border at Calexico, California where he stood in front of an enhanced fence and said migrants would not enter as the US is “full”.

McAleenan is now the acting Homeland Security Director, following Trump’s firing of Kirstjen Nielsen last Sunday for being too “weak” over the Administration’s “zero tolerance” policy.

The White House referred questions to the Department of Homeland Security, where a spokesman maintained:

Another Fake Story on @NBCNews that I offered Pardons to Homeland Securiy personnel in case they broke the law regarding illegal immigration and sanctuary cities. Of course this is not true. Mainstream Media is corrupt and getting worse, if that is possible, every day!

But multiple sources confirmed that, during the visit to Calexico, Trump told border agents to deny entry to migrants and say the US has no capacity. If courts objected, Trump said, the agents should reply, “Sorry, judge, I can’t do it. We don’t have the room.”

After Trump left the room, agents sought advice from superiors, who said that they were not giving that order and that the law must be followed. If the agents proceeded, they did so on their personal liability.

Trump also has demanded that the Administration resume the separation of children from immigrant parents, sending the juveniles into detention hundreds and even thousands of miles away.

Officials seized almost 3,000 children before courts blocked the “zero tolerance” measure last June. Government lawyers said earlier this month that some children may remain separated for up to two years.

On Friday, Trump indicated he will use immigrants as a political weapon, saying he is considering their release from detention into “sanctuary cities” with Democratic administrations.

Due to the fact that Democrats are unwilling to change our very dangerous immigration laws, we are indeed, as reported, giving strong considerations to placing Illegal Immigrants in Sanctuary Cities only….

Administration officials said earlier this week that the proposal had been made but was rejected. The White House received legal guidance months ago that the policy would break the law, open the administration to lawsuits, and undermine the effort to deport undocumented immigrants.