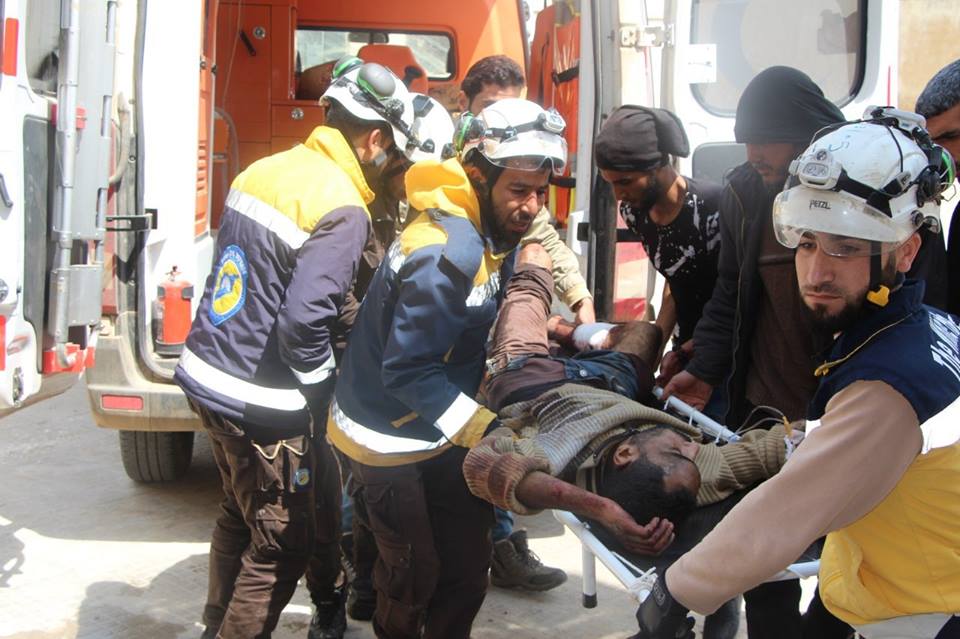 The city of Jisr al-Shughour has been struck by missiles.

Local activists claim Russian forces are responsible, despite the demilitarized zone around Idlib Province. Some reports say the long-range missiles were fired from a Russian warship in the Mediterranean.

12 civilians, including children and women, were injured by a bombardment from the Russian military airport of Humimim targeting the city of Jisr al-Shughour in the western countryside of Idlib#Syria #Idlib #EyesOnIdlib pic.twitter.com/n3iWkorqZS

Children moan for their dead father after having their house bombarded in Saraqibd during yesterday violence wave.
The death tool has reached 15 death.
More Voices of doctors & eyewitness via @MiddleEastEye https://t.co/hHwQK4duiF https://t.co/k4XxhU5xa0

Local reports said seven were slain in Nairab, including a woman and child, and more than 16 wounded, three of them critically. At least four people died in Saraqeb in eastern Idlib, among them the administrator of a youth sports program. At least one civilian was killed and others wounded from shelling on Khoain in the south of the province.

I lost today one of the bravest friends, a hero against #Daesh & #HTS. Mahmoud Jadee' a lovely father and grandfather and the one who was running sport program in Saraqeb to avoid youth from joining armed groups. We all in 24CR (@CEE_Program) are proud of you. pic.twitter.com/5Is7KiVwh7

The Assad regime escalated assaults in mid-February, killing scores of people — including 47 in a 10-day period — and breaking a demilitarized zone declared by Russia and Turkey last September.

Since last Wednesday, at least 38 civilians have been slain in Idlib and northern Hama Provinces, home to more than 3 million people — about 20% of Syria’s remaining population after eight years of conflict. Many of them have been displaced by regime attacks in other parts of the country.

The latest bombardment has included Russian-supplied BM-30 Smerch rockets, with a range of more than 50 km (31 miles); 300-mm rockets, and internationally-banned cluster munitions.

The hardline Islamist bloc Hay’at Tahrir al-Sham has carried out retaliatory attacks in northern Hama. The group says it is targeting regime troops, but regime media said on Sunday that five people were killed by rockets fired on Masyaf.

Despite announcing the 15 to 20-km wide demilitarized zone last September, Russia has joined regime attacks with airstrikes on Idlib. Moscow has declared that the attacks, including on civilian site, have been against “terrorists”.

Turkey has held back Russia from endorsing a pro-Assad offensive to overrun Idlib, threatened before last autumn’s agreement. However, Ankara has not spoken about the regime shelling, despite one attack in Saturday near a Turkish military observation post in northern Hama.

The Foreign Ministers of France, Germany, Britain, Canada, the US, Italy, and Japan expressed their “mounting concern” on Saturday after “the escalation in Syrian military activity in the de-escalation zone in Idlib over recent weeks”.

Ali Al-Basha, a displaced person in #Kafrzita, was killed along with 10 others injured. 7 air raids by Russian warplanes targeted the residential neighborhoods in northern countryside of #Hama past midnight. Our teams pulled out the victim and rescued the injured. pic.twitter.com/rEHaBZhoa5