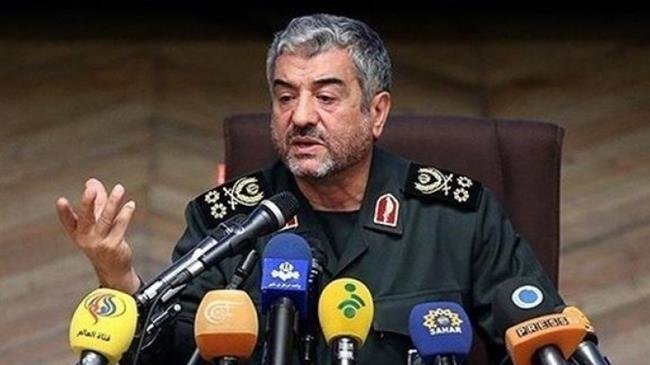 A statement written for Trump declared, “This unprecedented step, led by the Department of State, recognizes the reality that Iran is not only a State Sponsor of Terrorism, but that the IRGC actively participates in, finances, and promotes terrorism as a tool of statecraft.”

The Pentagon and CIA opposed the designation, arguing that it would allow Iranian officials to justify operations against Americans overseas, especially US special forces and paramilitary units working with the CIA.

However, Trump promoted it as part of a campaign for regime change in Iran: “This action will significantly expand the scope and scale of our maximum pressure on the Iranian regime.”

Secretary of State Mike Pompeo and National Security Advisor John Bolton overruled an inter-agency lawyers group that concluded the designation was too broad.

Iran’s head of judiciary Ebrahim Raisi, addressing senior officials, responded, “This measure has no credit either in political or legal terms in the eyes of the world’s governments and nations.”

Raisi said the Trump Administration is a hated government that is responsible for grave crimes in the region and the rest of the world. He repeated the warning, issued by the Revolutionary Guards, of retaliation, “because such a measure will be acceptable for the world’s public opinion, which is well aware of the United States’ bloody backdrop in supporting terrorism”.

The commander-in-chief of Iran’s Islamic Revolutionary Guards Corps has warned of retaliation against US forces if Washington labels the IRGC as a “terrorist organization”.

Maj. Gen. Mohammad Ali Jafari (pictured) said, “If the Americans make such a silly move and endanger our national security, we will implement and put reciprocal measures on our agenda based on the policies of Iran’s Islamic establishment.”

Jafari did not detail specific measures but said US forces will no longer have peace and calm in the Middle East.

The commander has long threatened the US against any step against his force. He said in July 2017:

If the US seeks to pursue sanctions against [Iran’s] defense and the IRGC, before that it should move its regional bases 1,000 kilometers away from Iran and it should know that it has to pay a high price for its miscalculation.

A US official said over the weekend that the Trump Administration will soon designate the IRGC as terrorist, possibly next week.

Washington has sanctioned dozens of entities and individuals connected with the IRGC, but has stopped short of labelling the entire force until now.

However, the Trump Administration has steadily moved towards pursuit of regime change in Iran. Last May, Donald Trump withdrew the US from the 2015 nuclear deal between Tehran and the 5+1 Powers (US, UK, France, Germany, China, and Russia). In November, the Administration imposed comprehensive sanctions, including on Iran’s energy and financial sectors.

The IRGC has about 125,000 military personnel. It holds a stake in much of Iran’s challenged economy through its construction, infrastructure, and logistics branches, as well as large holdings in both public and privatized companies.

The designation will be the first time that the US has named an entity of another government as a foreign terrorist organization.

#NetanyahuFirsters who have long agitated for FTO designation of the IRGC fully understand its consequences for US forces in the region. In fact, they seek to drag US into a quagmire on his behalf.@realDonaldTrump should know better than to be conned into another US disaster. pic.twitter.com/i4bcfgxybT

Almost all Iranian MPs declared full backing of the IRGC on Sunday. In a statement announced in Parliament, 255 of the 290 legislators said the security of the Islamic Republic and its armed forces are “red lines”. They echoed Gen. Jafari’s language:

In case of any measure by the US president or any other institution against the IRGC, we will start a double-urgency reciprocal measure, which will make the US leaders, who have been behind the formation of terrorist groups in the region and supported them, regret their stupid move.

Senior MP Heshmatollah Falahatpisheh said Parliament has prepared a double-urgency motion to “put [US] military personnel on our blacklist of terrorist groups along with Daesh [the Islamic State]”.