Syria Daily: Russia & Regime Say Children Threatened in Rukban — So Why is Camp Cut Off? 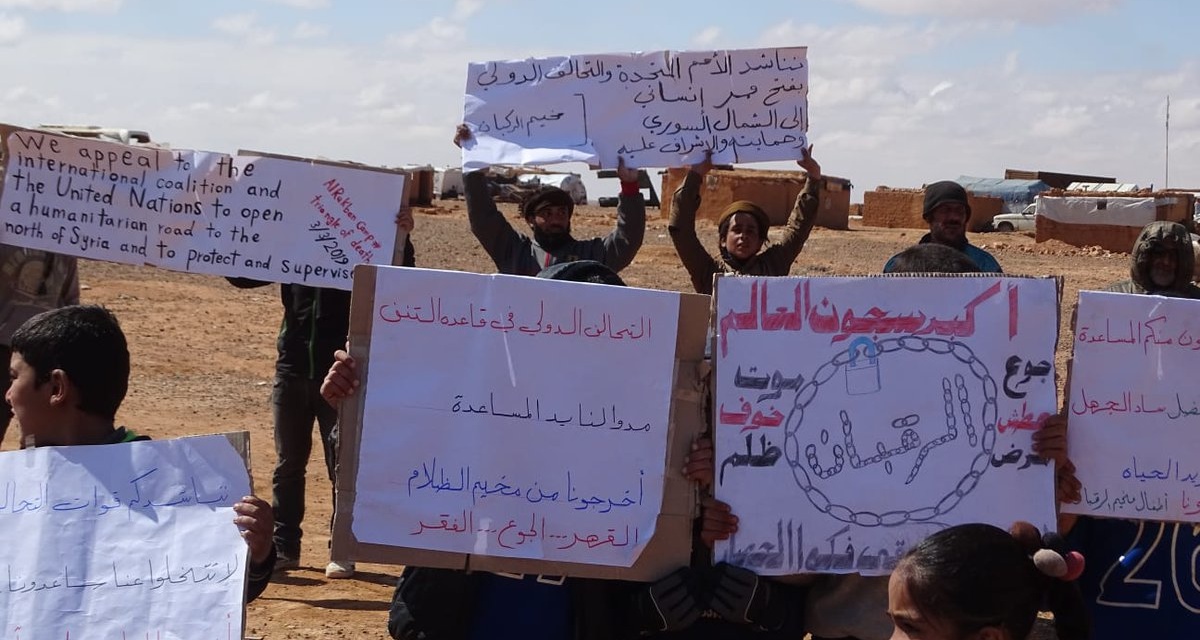 Russia and the Assad regime have warned that children could die in the Rukban camp in southeast Syria — even as the regime continues to cut off more than 40,000 displaced Syrians near the Jordanian border.

The heads of the Russian and Syrian inter-agency coordination headquarters, Colonel General Mikhail Mizintsev and Hussein Makhlouf, said in a joint statement:

The situation in the camp remains disastrous, its residents have to survive in the most difficult conditions….Children are the ones who suffer the most. Given the lack of food and medical care, as well as dire sanitary condition and the spread of infectious diseases, nursing babies have little chance to survive.

They asserted, without evidence, that residents are “facing militant violence on a daily basis”.

Hoping to force the displaced to return to their home areas, the regime cut off routes to Rukban last autumn. Damascus has allowed only two aid deliveries in 14 months.

The de facto siege has been compounded by Jordan’s refusal to allow movement across the border — closed in June 2016 after an Islamic State suicide attack which killed several Jordanian security personnel — except for a few emergency medical cases.

There are shortages of food, medical supplies, and other essentials and only basic medical clinics. Dozens of residents have died in the conditions since the autumn, as the UN warned of the critical situation for thousands of children.

Russia and the regime highlighted that threat in Monday’s statement, “According to the family members of people living in the camp, most of those who die in Rukban every day are children under the age of two.”

But the statement did not mention any role by the regime or Moscow in the siege or the attempts at forced removal to areas which residents fled in 2015 amid Islamic State attacks.

In a survey conducted by UN staff last month, more than 90% say they wish to leave Rukban but fear a return to their home areas. “All of those consulted, regardless of their profile or tribal affiliation, have concerns related to the situation at the destination,” said Reena Ghelani, a director at the UN’s humanitarian affairs and emergency relief office.

Residents cite their fears of detentions and forced conscription and uncertainty over status of their property.

Almost three weeks ago, Russia announced “humanitarian corridors” — the same tactic used in the siege and assault of eastern Aleppo city in 2016 and East Ghouta near Damascus in spring 2018 — for residents to depart. But no one arrived at the two checkpoints.

Last week Russia tried to organize a convoy to transfer the displaced; however, the “green buses”, notorious for their role in forced removals, never arrived. Residents held protests against any departure against their will, and the UN and the US and other countries issued statements of concern.

Moscow insisted that the US military had refused permission for the buses to reach Rukban. The camp is within a 55-km security zone around the American base at Tanf near the Iraqi border.

The Russian-regime statement again tried to shift any blame to the American military:

We once again call on the US to take steps to dismantle the Rukban camp and ensure the safety of those refugees who wish to return to their places of permanent residence, and leave the illegally occupied areas of Syria.

They also put pressure on Jordan, which has been in inconclusive talks with Moscow and the US about the future of Rukban and the displaced: “We expect that our Jordanian colleagues will continue participating in the implementation of initiatives concerning the return of Syrian refugees and the dismantling of the camp.”

Frustrated in its plans, Russia has continued to put out a series of false statements about Rukban. Last week it claimed that satellite photos showed “a fresh cemetery with 300 graves” for those who died from “anti-sanitary conditions”.

Residents and activists said there are no such graves.