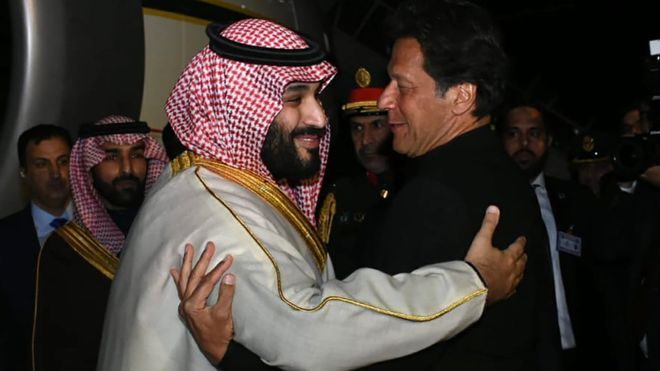 Originally published by the Fikra Forum, this is a longer version of an article for EA and The Conversation, “Falling in Love Again: Imran Khan, Pakistan’s Military, and a Saudi Crown Prince“:

Pakistan and Saudi Arabia share a long history of close bilateral ties, with bonds of religion and mutual interest dating back to the Saudi support for the independence struggle by the Muslims of the subcontinent during the 1940s. Over the years, this bilateral relationship has matured into a strategic partnership. This owes much to the blossoming of strong inter-personal ties between the ruling elites on both sides, a shared foreign policy outlook vis-à-vis both regional and international events, and collaboration in the security domain. These ties are further strengthened by the need for regional allies due to longstanding tensions between Saudi Arabia and Iran and between Pakistan and India, and domestic political changes within the two countries have also shaped the relationship’s development.

Originally limited to visits between top political leadership, coordination spelled out by agreements has since developed between the two countries’ military elites. Security — in particular the agreement on defense cooperation that brought Pakistan’s military and air force trainers to Saudi Arabia — was integrated into the relationship in the aftermath of the 1967 Arab-Israel war. This strategic alignment further took form during the Cold War with both sides as key security partners of the United States on their respective regional frontlines.

In the aftermath of the Iranian Revolution, the security understanding among the two sides was further defined by the 1982 Protocol Agreement which paved the way for the deployment of nearly 15,000 Pakistani troops in the Kingdom. These deputations created a unique bond between the Pakistani security institutions and Saudi royalty. This special relationship was made conspicuous by Saudi Defense Minister Prince Sultan bin Abdelaziz al-Saud’s visit to the Pakistani nuclear installations in 1999 — the first foreigner to visit.

When inter-governmental ties come under strain, military ties have remained a guarantor of the stability of the relationship, for example, during the tenure of the Pakistan Peoples Party (PPP) government of 2008-2013, which the Saudis perceived as heavily tilted towards Iran. The Saudi leadership was visibly pleased with the departure of the PPP and the arrival of Nawaz Sharif — head of the pro-military Pakistan Muslim League Party — at the helm of affairs.

With Riyadh’s generous loan package of $1.5 billion offered in 2014, the Nawaz government appeared to have full Saudi support. But ties were strained by Pakistan’s refusal to join the Saudi-led military intervention in Yemen the following year. Still the Pakistani military high command remained engaged with Saudi decision-makers and took two vital steps to assuage their concerns. First, the military fully backed the Saudi initiative of an Islamic Military Counter-Terrorism Coalition and complied with the Saudi request that Pakistan’s former Army Chief General Raheel Sharif lead the command. The military sent additional troops under the auspices of the 1982 agreement to join 1,600 Pakistani personnel already stationed in the Kingdom.

But while these measures ended the tension gripping bilateral ties, disquiet in the relationship remained. The Saudi request for Pakistan to participate in the Yemen campaign had been the first significant political interaction between the new generation of Saudi decision-makers and Nawaz Sharif’s government. After its rejection, Nawaz forged cordial ties with the ruling family of Qatar and President Erdoğan of Turkey. And as Nawaz came under increased political pressure in the wake of the Panama Papers scandal, his attempts to persuade the Saudi leadership to intervene within Pakistan failed.

Imran and MBS: A New Beginning?

Imran Khan’s victory in Pakistan’s July 2018 elections brought a renewed vibrancy in Saudi-Pakistani relations. Domestically, Imran altered the nature of Pakistan’s civil-military relationship by openly expressing trust in the country’s armed forces. The new government’s realization that Pakistan was in dire economic straits — including a finance gap of more than $12 billio — pushed it to re-engage with traditional allies, especially Saudi Arabia.

Imran’s maiden trip to Saudi Arabia, his first journey abroad as Prime Minister, cemented this emphasis on rebuilding ties with the Kingdom. Meanwhile, to cement the personal diplomacy, Pakistan brokered a meeting between the Taliban and the U.S. special envoy Zalmay Khalilzad in Abu Dhabi, helping bring back both the Kingdom and the UAE as stakeholders in the Afghan peace process.

Unlike other Pakistani politicians, Imran does not have a previous history with the Kingdom or its older generation of royals. This has helped him in forging a relationship with Saudi Crown Prince Mohammad Bin Salman, as both portrayed their desire to curb corruption and reform governance.

The cornerstone of the new partnership has been a reconfiguration of the bilateral relationship, emphasizing its economic components. In his parleys with the Saudi side, Imran managed to secure a $6 billion aid package — four times the size of the Kingdom’s 2014 loan. This package includes $3 billion as balance of payment support along with a one-year deferred payment facility of up to $3 billion for oil imports. It has proved instrumental in giving Pakistan breathing space in its current economic crisis.

Saudi Arabia has further entrench itself within Pakistan with a $10 billion oil refinery in Gwadar, a city in the southwest whose port has been developed by Beijing as part of the China-Pakistan Economic Corridor. This investment may change the regional energy and security landscape, and the Saudis have agreed to provide funds for power generation projects and have shown an interest in investment in petrochemicals, mining, construction, and agriculture. A coordination council will oversee the implementation of projects.

Since the Saudi decision to support Pakistan financially, a flurry of high-ranking Saudi defense officials visited the country. First to arrive was the Saudi Assistant Minister of Defense, Muhammad Bin Abdullah al-Ayesh, followed by the Saudi Chief of General Staff, Gen. Fayyadh bin Hamid al-Ruwaili. The latter co-chaired the Joint Military Cooperation Committee meeting alongside Pakistan’s Chairman of Joint Chiefs of Staff Committee, Gen Zubair Mahmood Hayat — who as CJCSC has an almost exclusive jurisdiction over nuclear forces and assets and has served as the Chief of Strategic Plans Division of Pakistan, overseeing the country’s nuclear arsenal. Later, al-Ruwaili met Army Chief Gen. Bajwa and was awarded the Nishan-e-Imtiaz (Order of Excellence) military award by the President. These meetings suggest a drive towards diversification of Pakistani-Saudi defence interactions from conventional tiers of cooperation to more strategic ones, addressing the changing threat perception in the region.

The most critical of these meetings was the visit of former Pakistani Army Chief and head of the IMCTC, Gen. (retired) Raheel Sharif, to the Kingdom days before MbS’s scheduled visit to Pakistan. On his return during the Crown Prince’s visit, Raheel met the Army Chief and Imran, triggering speculation that he delivered a message from the Saudi side to increase Pakistan’s commitment to the IMCTC. This could mean an additional detachment of Pakistani troops to serve under the banner of the Coalition and a push for its engagement in kinetic operations.

The new Pakistani-Saudi relationship incorporates economic initiatives into the two countries’ security-oriented ties. The new strategic calculus is the outcome of the inter-personal bond between the troika of Imran, Bajwa, and MBS. At the same time, both sides seek to institutionalize the bilateral relationship and move away from relying on personal friendship to preserve ties.