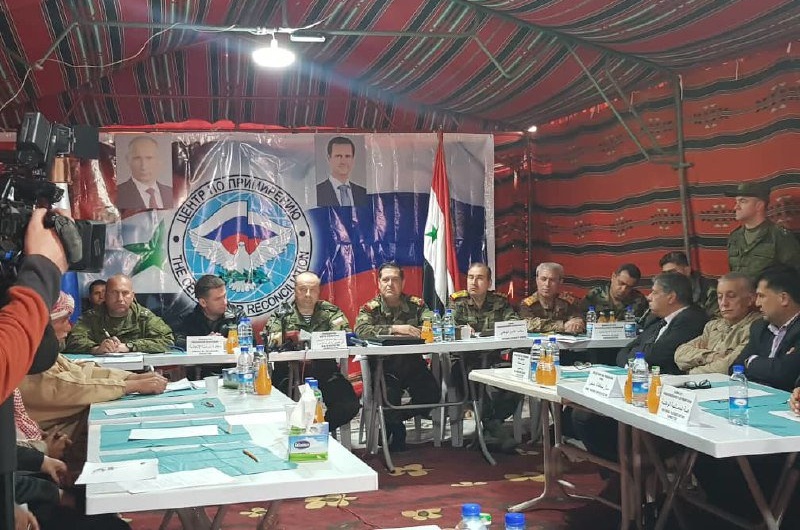 A local source says Tuesday’s Russia-organized meeting was a “failure”. A claim, circulating on social media, that Russia offered transport for Rukban residents to opposition-controlled northern Syria is a “complete lie”.

Meanwhile, the WHO tweeted on Tuesday, probably in connection with women who departed the camp on Sunday:

#WHO-supported vaccination team from the #Homs Directorate of Health vaccinated 90 children who were evacuated from #Rukban against polio and other childhood diseases, they were just some of the hundreds of children vaccinated today. #VaccinesWork #Syria pic.twitter.com/sWjZfnSgao

#WHO-supported vaccination team from the #Homs Directorate of Health vaccinated 90 children who were evacuated from #Rukban against polio and other childhood diseases, they were just some of the hundreds of children vaccinated today. #VaccinesWork #Syria pic.twitter.com/sWjZfnSgao

Trying to force more than 40,000 displaced Syrians out of the Rukban camp in southeast Syria, Russian military officers and Assad regime officials have met camp representatives and UN staff in the desert area near the Jordanian border.

Last week the Russian Defense Ministry said the US military and American diplomats in Jordan had been invited. Rukban lies within a 55-km (34-mile) security zone around the US base at Tanf near the Iraq border.

The Russian announcement about Tuesday’s meeting said the American rejected the invitation to join the uniformed Russian and regime officials, sitting at plastic tables under a canvas tent.

An agenda for the meeting, to discuss “step-by-step” dissolution of Rukban, said camp representatives would see the staff of the Russian “Center for Reconciliation” and officials from the regime’s army and security agencies. Ahmad al-Zgheira, a member of Rukban’s administration, said a delegation was present.

The UN in Syria did not mention Tuesday’s but welcomed “all efforts to find durable solutions for the people of Rukban” and “dialogue with all relevant parties, to further clarify the return and relocation process”. A UN spokesperson confirmed that representatives from the UN refugge agency UNHCR, the humanitarian agency UNOCHA, and the UN envoy to Syria’s office attended.

Tuesday’s meeting follows months of an Assad regime siege and Russian pressure and propaganda for the displaced to return to home areas, which they fled in 2015 amid Islamic State attacks.

The civilians were trapped in the desert area, known as “The Berm”, when Jordan closed the border in June 2016 after an ISIS suicide bombing killed several Jordanian personnel.

The Assad regime has only allowed two aid convoys since January 2018. Last autumn it cut roads to Rukban, blocking Bedouin traders. Prices soared with shortages of food, medicine, and essential supplies. Dozens of people have died from the lack of food and adequate medical care, including 12 children since January, and the UN has warned that thousands of others are at risk.

More than 90% of the residents told the UN in a survey last month that they wish to leave Rukban. However, they said they were prevented by fear of detentions and forced conscription and insecurity over the status of their property.

Russian propaganda has blamed “militants” and the US military. Foreign Minister Sergei Lavrov claimed the Americans were holding the displaced “in the camp against their will”.

Last week, the Russian Foreign Ministry put out a tweet calling for the “liquidation” of the camp.

On Sunday, some women finally departed. The Russian “Center for Reconciliation” claimed the total was 360.

Claims from within Rukban. One source said 15 families left in recent days, another said 186 people, and a third said up to 500. Mahmoud al-Hamili, a spokesperson for Rukban’s administration, said on Tuesday:

All the numbers are inaccurate. How are we supposed to gather accurate statistics on the number of people planning to leave within a 15-square-kilometer area?

We aren’t supported by either local or international bodies. Unfortunately they don’t have the means to do that kind of documentation.

Russian officials continued the blame-America tactics, declaring that the US military blocked the Russian and Assad regime representatives from entering Rukban: “The American side, which is directly responsible for what is happening in the Al Tanf zone illegally occupied by them, ignored the initiative aimed at saving the residents of Rukban and refused to participate in the coordination meeting.”