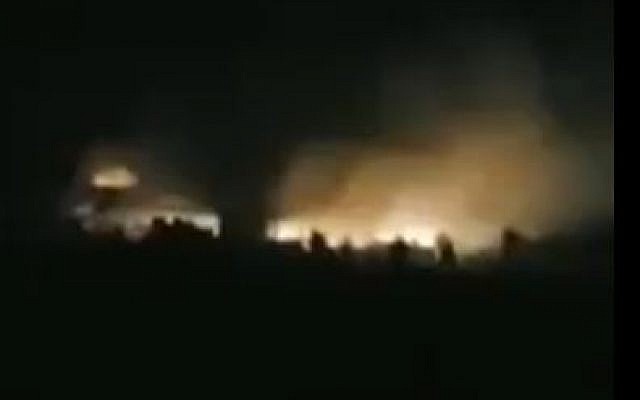 Claims circulated that the target was the Iranian base at Nayrab, struck on two previous occasions by the Israelis, and ammunition stores of Iranian forces and Iranian-led militias.

A regime “military source” said the attack was on positions near the Sheikh Najjar industrial zone and — as always — asserted that several missiles had been intercepted and destroyed. It said at least four people, described as warehouse guards, were killed.

Following standard practice, the Israel Defense Forces did not comment.

Israel has carried out hundreds of airstrikes against Assad regime, Iranian, and Hezbollah targets during the conflict. The attacks initially focused on Iranian transfers of weapons and missiles to Hezbollah and on the movement of Iranian and Hezbollah personnel to southwest Syria near the Israeli-occupied Golan Heights. In the past year, with Prime Minister Benjamin Netanyahu demanding Iranian military withdrawal from Syria, Israel expanded the raids to targets Assad regime bases with Iranian personnel throughout the country.

In January, Israel fired missiles on Iran’s Kisweh base on Damascus, a warehouse at Damascus International Airport, and Iranian targets across southern Syria.

The Israelis have warned for years that they will not tolerate Iranian-led or Hezbollah forces in southwest Syria near the Israeli-occupied Golan Heights.

On Monday, with Israeli Prime Minister Benjamin Netanyahu alongside him, Donald Trump formally declared Israel’s sovereignty over the Golan, seized in the 1967 Arab-Israeli War.