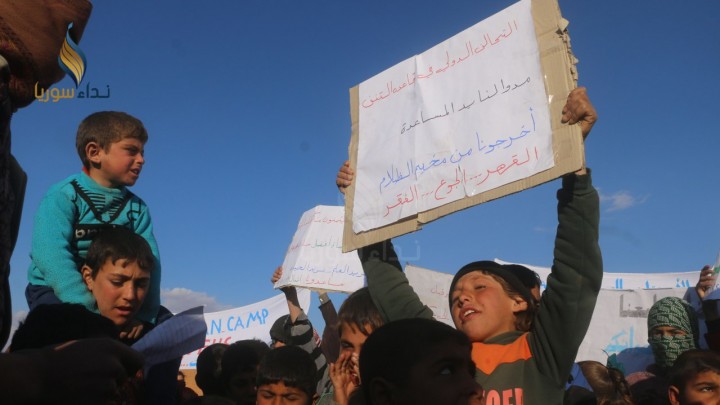 A boy holds up sign protesting conditions in the Rukban camp in southeast Syria, March 7, 2019

A reliable source explains to EA why children are not being evacuated despite being seriously ill.

The officials told activists to refer the cases to the Sham clinic within Rukban, where the Red Crescent would liaise with medics. However, according to the sources, “nothing happened” in three urgent cases that were reported.

More children have died in the Rukban camp in southeast Syria, as Russia and the Assad regime step up propaganda to obscure their roles in the deaths.

The latest fatalities in Rukban, which has more than 40,000 displaced Syrians, are week-old Fatima and two-week-old Omar. They died on Wednesday due to a lack of medical supplies.

Dozens of residents have perished since last autumn, when the Assad regime besieged the camp by cutting a main route. Nearby Jordan has compounded the shortages by closing the border to movement and supplies, except for urgent medical evacuations.

At least 12 children, including newborns, have died in Rukban this year, according to UNICEF

There is a shortage of everything here….If there was any baby formula in the market, we’d buy it and give it to the infants.

The Assad regime has only allowed two aid deliveries in 14 months to the camp, where people fled in 2015 after Islamic State attacks in their home areas. There are only basic clinics, and amid the shortages, the UN has warned that thousands of children are at risk.

Russia and the regime have stepped up pressure on residents to return to their homes. More than 90% want to leave the camp, but they fear detention and forced conscription and are uncertain about the status of property. Many have asked instead for transfer to opposition-held northwest Syria.

Last month Russia proclaimed two “humanitarian corridors” — checkpoints manned by Russian personnel — for residents to depart, but none showed. Moscow then organized a convoy for forced evacuation, but amid the protests of residents, it never reached Rukban.

Syria Daily, Mar 12: Russia & Regime Say Children Threatened in Rukban — So Why is Camp Cut Off?

Covering up their role and diverting blame for the deaths, Russia and the regime have put out a series of propaganda lines.

Moscow’s officials have blamed “militant” residents and the US — Rukban lies within the 55-km security zone around the American base at Tanf on the Iraqi border — and falsely claimed there are newly-constructed mass graves for which the Americans and those in the camp bear responsibility.

On Thursday, Maj. Gen. Viktor Kupchishin of the Russian “Center for Reconciliation” repeated the lines: “The situation in the Rukban camp is made worse by widespread crime. Refugees are forced to stay in the camp and suffer from lawlessness on behalf of militant groups supported by the United States.”

He claimed the Assad regime will offer “security guarantees” to those who leave and will grant amnesty to men who did not serve in the army.

In an apparent concession that many in the camp will never accept a forced return to home areas, Syrian officials said they could go to Latakia in western Syria.

We have prepared 30 rooms that can accommodate up to 500 people. There is everything they might need, including kitchens and showers, they will also be provided with food. This is a matter of national interest. We need to make sure that those who come here tell others they are welcome in new places of residence.

He did not explain how Latakia, a key regime-held city throughout the eight-year conflict, could accommodate 40,000 displaced.

We are totally ready to address all status issues refugees may face upon returning from the Rukban camp and ensure a decent life for them. All Syrians have the right to get identity documents under a simplified procedure, find jobs and lead a safe and decent life.