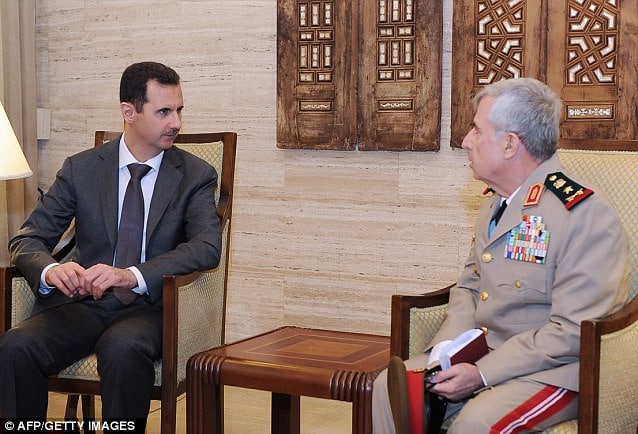 The Assad regime has issued a high-profile threat to both Syria’s opposition and Kurds, with the Defense Minister, Gen. Ali Abdallah Ayoub, declaring that the regime will regain control over every inch of its territory.

Ayoub sent the warning at official talks with senior military delegations from Iran and Iraq. He proclaimed, “We do not compromise when it comes to our right to defend its sovereignty.”

Tehran has propped up the Assad regime since the Syrian uprising began in March 2011. Seeking to present a wider coalition of “resistance”, Iran and the regime declared a coordinating center with Baghdad soon after Russia’s military intervention in September 2015.

Ayoub cloaked his warning to other Syrian groups in a reference to “challenges, dangers, and threats posed by the spread of Takfiri terrorism”.

The regime has reoccupied all of southern Syria, including the East Ghouta area near Damascus, in the past year.

However, the opposition still holds much of the northwest, with more than three million people — about 20% of Syria’s remaining population — in Idlib and northern Hama Provinces. The regime is continuing attacks, but its desire for an offensive was checked in September when Russia and Turkey declared a demilitarized zone.

Ayoub signalled to Russia as well as other audiences when he noted three other “de-escalation zones” announced by Moscow, before it pursued sieges and mass bombing to help the regime retake eastern Aleppo city, East Ghouta, and southwest Syria.

As Idlib Attacked, Will the Astana Group Fail Syria?

Kurdish groups hold much of the north and east of Syria, about 27% of the country’s territory. The Kurdish-led Syrian Democratic Forces, who have removed the Islamic State from all but one village, are supported by the US.

Seeking to reclaim authority over the area, the regime has held talks with Kurdish factions, but has made no progress.