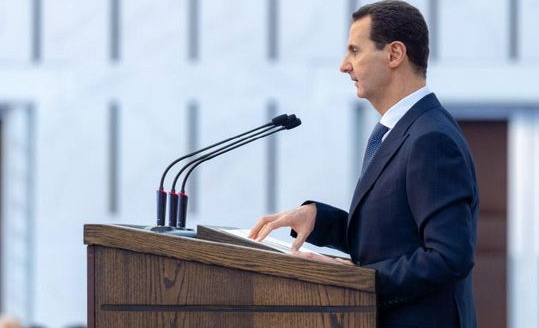 Bashar al-Assad has pressed Kurdish groups to accept a regime takeover of their areas in northeast Syria, pointing to Donald Trump’s order for withdrawal of all 2,000 US troops backing a Kurdish-led force.

Assad said, in a televised speech:

He added, “Nobody will protect you except your state. If you do not prepare yourselves to defend your country, you will be nothing but slaves to [Turkey].”

The US military created the Syrian Democratic Forces, led by the Kurdish faction YPG, in autumn 2015 to push out the Islamic State from northern and eastern Syria. SDF offensives have reduced ISIS to a pocket of about a square mile near the Iraqi border.

But Trump, during a phone call with Turkish President Recep Tayyip Erdoğan on December 14, impulsively decided on troop withdrawal because of Erdoğan’s statement that the Islamic State was “99% defeated”.

Ankara considers the Kurdish YPG as “terrorists”, linked to the Turkish Kurdish insurgency PKK. Erdoğan has proposed a 32-km “safe zone” along the Turkish-Syrian border across the Kurdish cantons of Kobani and Cezire, with the exclusion of the YPG from the area. Turkey is also demanding that the US retrieve all weapons supplied to the Kurdish militia.

Kurdish factions have been in talks with the Assad regime, backed by its ally Russia. However, with the Kurds insisting on autonomy and the regime rejecting self-rule, the discussions have made little progress.

The Kurdish groups control about 27% of Syria’s territory, including cities such as Raqqa, Hasakeh, Qamishli, and Manbij.

In his speech to heads of local councils on Sunday, Assad implicitly challenged the Kurdish groups that “a decentralization that weakens the state’s authority and marginalizes it…would lead to social division and ultimately geographic division”.

The President said that those who pursued these plans are limited in their way of thinking, as their goals could not be achieved without true social division in Syria, which never existed, otherwise Syria would have become divided during the first years or even months of the war.