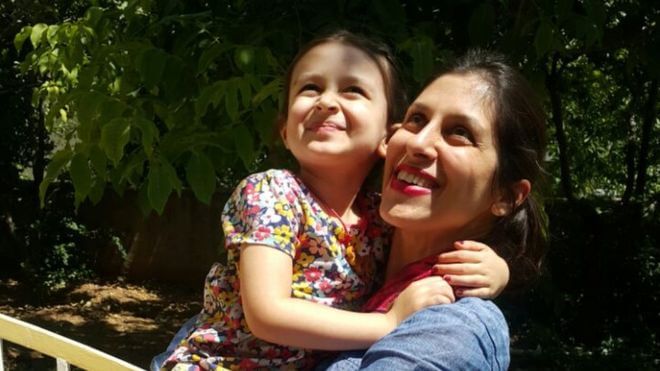 The step is largely symbolic, raising charity worker Zaghari-Ratcliffe’s case from a consular matter to the level of a dispute between the two states. However, in combination with European maneuvers over a link vital for the Islamic Republic’s troubled economy, it could step up pressure for Zaghari-Ratcliffe’s release or, at least, better prison conditions.

The Foreign Office acted after Foreign Secretary Jeremy Hunt said Tehran is not meeting its human rights obligations under international humanitarian law. Hunt spoke as reports circulated that Iranian officials refused Zaghari-Ratcliffe’s request for better medical treatment, including regular access to drugs and to her own doctor.

We have not been able to secure her the medical treatment she urgently needs despite the assurances to the contrary….

I have not taken this decision lightly. I have considered the unacceptable treatment Nazanin has received over three years, including not just lack of access to medical treatment, but also lack of due process in proceedings brought against her.

Zaghari-Ratcliffe, who works for the Thomson Reuters Foundation, and human rights activist Narges Mohammadi went on a three-day hunger strike in January for access to medical care. The strike was ended when Iranian officials said they would permit some treatment.

Zaghari-Ratcliffe is concerned about lumps in her breasts, neck pain, and numbness in her arms and legs. She was denied access to a psychiatrist, despite the recommendation of the prison doctor.

This week Zaghari-Ratcliffe and Mohammadi wrote that Iranian officials have not kept the promises of improved treatment.

In a letter to Tehran Prosecutor General Abbas Jafari Dolatabadi, they said:

[We are] still being deprived of medical attention and from being sent to [outside] medical facilities. During the years that we have spent in prison, sending us to medical centres to [see] our doctors was a usual occurrence but, for unknown reasons, it is no longer done.

Access to doctors, treatment and medication is the right of any human being and prisoners are no exception.

Hunt said the diplomatic protection “is unlikely to be a magic wand that leads to an overnight result”. He indicated that the UK will not pursue action such as sanctions or recourse to an international criminal court at this point.

The Iranian Ambassador to the UK immediately responded that the diplomatic protection is not valid under international law, because Iran does not recognize dual nationality.

But Iran has been negotiating for months for a European Special Purpose Vehicle for non-dollar trade in Iranian oil and other commodities and goods, bypassing US sanctions.

The European Commission announced a limited SPV in late January, allowing for Tehran’s imports of foodstuffs, medical supplies, and pharmaceuticals.

Iranian officials rejected the launch because of “humiliating conditions”, and the Supreme Leader appeared to denounce further pursuit of ties with Europe. But the Iranian Foreign Office has kept open the possibility of the SPV, saying a European delegation is in Tehran this week.

Zaghari-Ratcliffe was seized in April 2016 at the airport as she and her infant daughter Gabriella were leaving Iran after a visit to family. pres

The charity worker was sentenced to five years on espionage charges. No evidence was publicly presented at the time.

Later, in State TV documentaries, payslips and e-mails were displayed to “prove” Zaghari-Ratcliffe sought the overthrow of the Islamic Republic when she worked for BBC Media Action, which trains journalists overseas, after the mass protests against the 2009 disputed Presidential election.