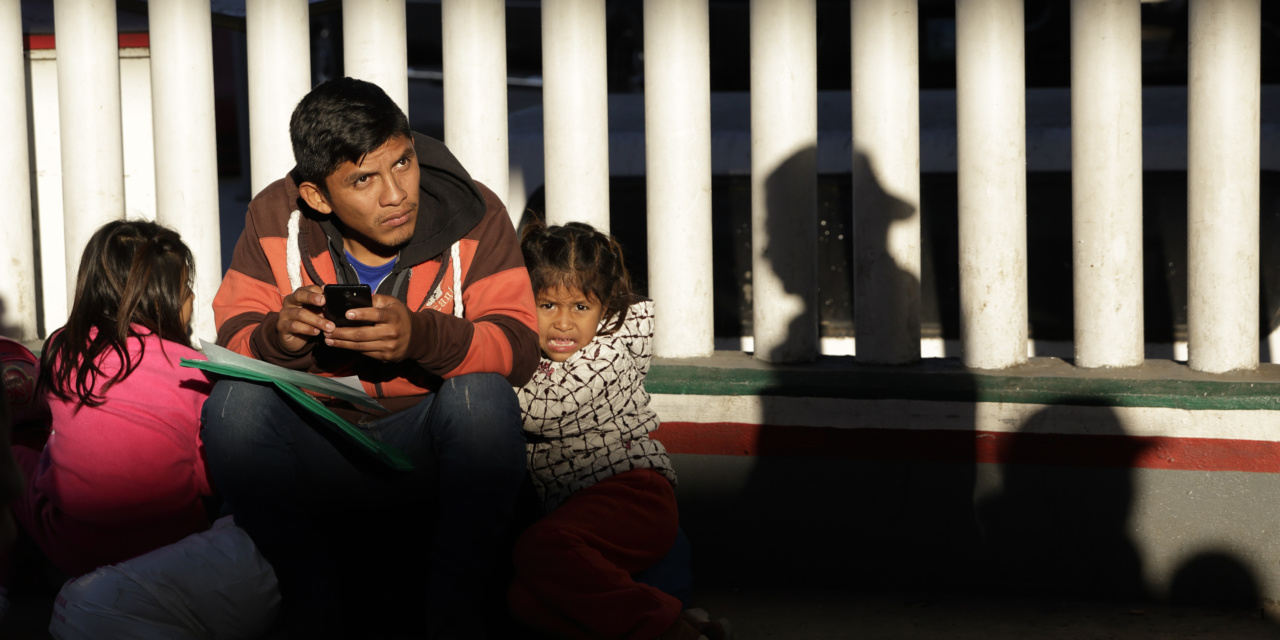 A migrant and his children await a discussion of their asylum application, Tijuana, Mexico, January 25, 2019 (Gregory Bull/AP)

Countering the Trump Administration’s “zero tolerance” policy, a US federal court has expanded the legal rights of asylum seekers.

The 9th Circuit Court of Appeals in California ruled on Thursday that authorities can no longer swiftly deport asylum seekers who fail an initial screening.

By widening Constitutional protections for undocumented immigrants at the border, the court opened a legal path a appeal for permission to stay, even when an asylum officer and an immigration judge rule that there is no credible fear of persecution in their homelands.

The case was over the right to appeal for a Sri Lankan migrant who was turned away at California’s border with Mexico in 2017. It applies to asylum seekers in the five states included in the court’s jurisdiction — California, Arizona, Washington, Oregon and Hawaii — and has national implications because it overturns a ruling by the 3rd Circuit Court.

The historical and practical importance of this ruling cannot be overstated….[It] reaffirms the Constitution’s foundational principle that individuals deprived of their liberty must have access to a federal court.

Interception of migrants at the US-Mexico border has dropped sharply over more than 40 years, but the number is rising because of families from Central America fleeing violence and poverty. Immigration authorities received more than 99,000 requests for asylum interviews during the 2018 fiscal year, including more than 54,000 at the southwest border.

In 2016, an estimated 7,200 migrants were denied permission to apply for asylum after initial interviews and subjected to expedited deportation proceedings.

During the Trump Administration, the denial of asylum in initial reviews has increased. In June 2018, only 15% found a credible fear of persecution, about half the rate from the previous June.

The Administration is expected to appeal to the Supreme Court to maintain its hardline approach to migrants.

The ruling came a day after Homeland Security Secretary Kirstjen Nielsen denied that the Trump Administration, which separated almost 3,000 children from immigrant parents in 2018, had a formal policy of family separation and deportation of parents.

Appearking before a House committee, Nielsen rewrote the Administration’s announcement in April 2018 of its “zero tolerance” approach. She objected to Rep. Kathleen Rice’s observation, “It was a policy announced by the Attorney General of this country — that families were going to be separated”:

The consequence of any adult going to jail in this country is they are separated from their child. That wasn’t the point of it. The point was to increase prosecutions for those breaking the law, and not exempting any class of aliens.

Nielsen referred to immigrant children in federal custody as “UACs”, shorthand for “unaccompanied minors”, and said that cages which held them were not really cages: “They are areas of the border facility that are carved out for the safety and protection of those who remain there while they’re being processed.”