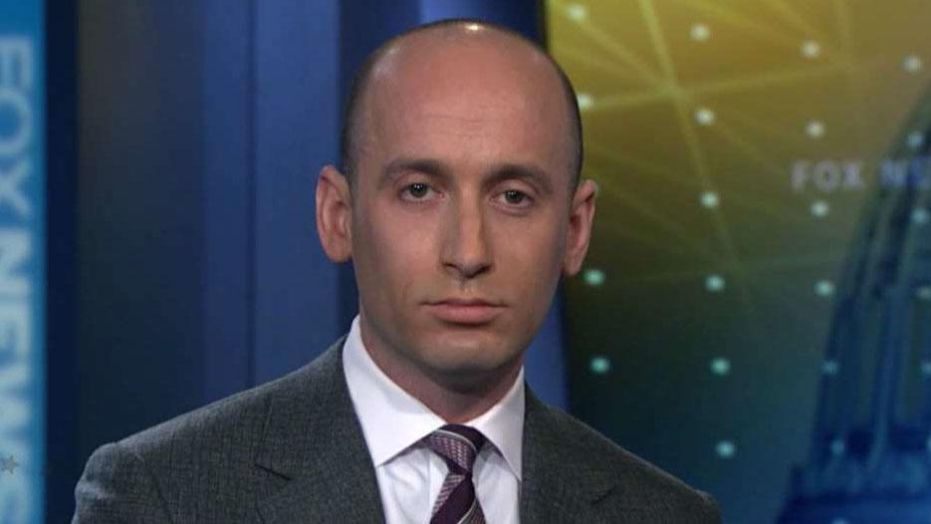 Facing a political and legal battle, the White House lies on Sunday about Donald Trump’s declaration of a “national emergency” to seize funds for his Wall with Mexico.

Hardline advisor Stephen Miller led the effort on Fox News Sunday with the falsehoods that there are an “increasing number of people crossing” into the US from Mexico and “a huge increase in drug deaths” because of narcotics moving through an open border.

In fact, illegal entries from Mexico into the US have decreased year-on-year since 2006, and the smuggling of the large majority of drugs is attempted through US ports of entry.

Interviewer Chris Wallace presented Government statistics that confirmed attempted crossings are at their lowest levels in almost 40 years and that most drugs are intercepted at the ports of entry.

Declaring the emergency on Friday — in a speech likely written by the anti-immigration Miller — Trump falsely declared, “It’s an invasion. We have an invasion of drugs and criminals coming into our country.”

Trump said Government reports were a “lie”. When reporters presented the Homeland Security data refuting the portrayal, Trump snapped, “The numbers that you gave are wrong. It’s a fake question.”

Democrats have said that they will introduce a Congressional resolution to override Trump’s resolution, and Republican legislators are divided on the issue. Senate Majority Leader Mitch McConnell reportedly warned Trump last week that the Administration has two weeks to make its case for the emergency and diversion of money for The Wall, before a bipartisan effort challenges the declaration.

Miller indicated that, if Congress passes the override resolution, Trump will veto it: “He’s going to protect his national emergency declaration, guaranteed….If the president can’t defend this country, then he cannot fulfill his constitutional oath of office.”

Lawsuits are always being filed to block any Wall construction, with the first in Texas on behalf of a nature reserve and local landowners. California Attorney General Xavier Becerra, a Democrat, said Sunday that the state is working with “sister state partners” on a suit which could be filed early this week.

Citizens for Responsibility and Ethics in Washington has sued the Justice Department on Friday, accusing it of failing to provide documents related to the declaration. The Center for Biological Diversity’s complaint says Trump has failed to identify a legal authority for the emergency, and is aruging that a border barrier will prevent wildlife from being able to move in their natural habitat, which “could result in the extirpation of jaguars, ocelots, and other endangered species within the United States”.

The American Civil Liberties Union said it is preparing a lawsuit arguing that Trump cannot legally redirect taxpayer money during an “emergency” unless it is for military construction projects that support the armed forces.

But Miller insisted that by late 2020, “hundreds of miles” of new barriers will be built: “If the president can’t defend this country, then he cannot fulfill his constitutional oath of office.”

The White House is seeking $8 billion for border barriers, including The Wall. Of this, $1.375 billion can come from last week’s bipartisan Congressional bill funding the Government through September, a measure signed by Trump only if he could then declare his emergency.

Because the bill specifically rules out any money for The Wall, the Administration is looking for more than $6.4 billion from other US agencies. Almost all of this will come from the military: $2.6 billion from counter-narcotics programs and $3.5 billion from military construction projects.

If [Trump] wants to appropriate more money to put folks — more agents at the border, to put more people at the ports of entry…we can have those conversations.

But to take money away from [the Department of Defense] in order to build this wall that is essentially a campaign promise, I think, is really wrong priorities, and I think it’s very harmful to the country.

In response to criticism, Acting Defense Secretary Patrick Shanahan ruled out taking money from base housing construction, but Duckworth listed projects such as training facilities and aircraft hangers that could be affected.