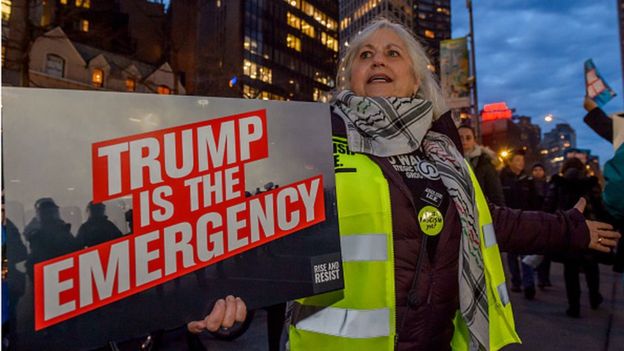 The Trump Administration prepares to take funds from the military for Donald Trump’s Wall with Mexico, following Trump’s declaration of a “national emergency” on Friday.

Acting Defense Secretary Patrick Shanahan said yesterday that he will begin studying on Monday which military projects will give up money.

Shanahan told reporters on a flight from Munich, “I think I have a lot of discretion. You can trust the numbers in terms of the potential. Then you gotta marry it up with where the money would be spent.”

White House officials say that they are seeking $8 billion for border barriers, including The Wall. Of this, $1.375 billion was approved by Congress last week — but with not a penny for Trump’s vanity project of a 30-foot-tall structure — in the bill to prevent another Trump Shutdown of the Federal Government.

Officials said $2.5 billion will come from the military’s counter-narcotics programs — ironic, given that Trump has falsely cited a “drugs invasion” as one of the necessities for the national emergency — and $3.6 billion from military construction.

After initial criticism, Shanahan said Saturday that no funds will be taken from base housing. He did not say if other construction of facilities such as gyms, schools, and shops will be affected.

There’ve been no determinations by me, so that’s what I’ll be doing [Monday]. But I just want to make a point of this: we are following the law, using the rules, and we’re not bending the rules.

Trump is facing significant political and legal challenges to the declaration and any diversion of money for the Wall.

While agreeing to the national emergency — to ensure that Trump would not veto the funding bill to keep the Government open — Senate Majority Leader Mitch McConnell told Trump that he has only two weeks before Congress, on a bipartisan basis, will try to override the declaration.

Several Republican senators have already expressed the objections, and the staunchly conservative Wall Street Journal editorial board said there was “no justification” for Trump’s order.

The first court case to block Wall construction has been filed on Texas, on behalf of a nature reserve and local landowners. Other lawsuits are expected soon in border states.