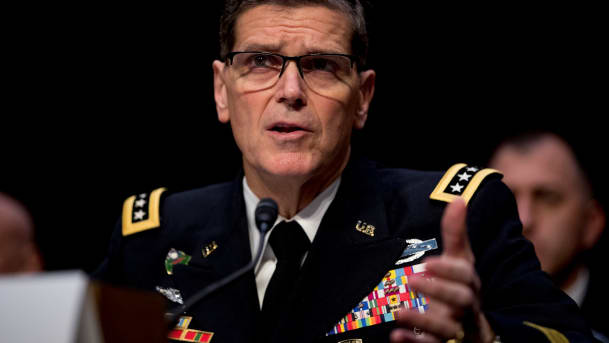 Pushing back Donald Trump, the head of US Central Command has said 10,000s of Islamic fighters remain in Syria and Iraq.

Justifying his impulsive decision on December 14 to withdraw all 2,000 US troops from Syria, Trump has declared that ISIS is almost “completely defeated” and does not retain a “single inch” of the Caliphate.

But US officials are spinning out the table for any withdrawal. They express concern about a resurgence of the Islamic State, as well as the need to continue support of Kurdish partners and to maintain a counter to Iranian influence inside Syria.

The US-backed, Kurdish-led Syrian Democratic Forces say they are on the verge of removing the last Islamic State pocket of territory, in eastern Syria near the Iraqi border.

But Gen. Joseph Votel told reporters traveling with him to the Middle East on his two-week farewell tour, “They [ISIS members] are dispersed and disaggregated, but there is leadership, there are fighters there, there are facilitators there.”

Votel’s comments reinforce the assessment of the US intelligence community, summarized in testimony from Director of National Intelligence Dan Coats before Congress last week. Also testifying to the Senate Armed Services Committee, Votel said, “We do have to keep pressure on this network….They have the ability of coming back together if we don’t.”

Islamic State fighters also remain in desert area in eastern Syria, although they are surrounded by pro-Assad forces.

The CENTCOM commander put his focus on the ongoing US presence in the country:

I’m very proud of the coalition force team that we have on the ground who’s assisting our Syrian Democratic Force partners in what will be difficult fighting. Urban terrain, high density of explosive hazards in the area, and the presence of displaced persons and others who are attempting to depart the area.

Votel said all US troops will eventually leave Syria — “The President’s orders are very clear to us. We understand exactly what he has directed”. But he would not set a timeline: while saying it was “probably weeks” before equipment was moved, he said operations “will all be driven by the situation on the ground”.

The general also said the US military will also seek ways to maintain pressure on ISIS and support the SDF without ground troops, although he offered no specifics.

Turkish President Recep Tayyip Erdoğan again sought US withdrawal over the weekend. He implicitly accused the US of giving weapons to “terrorists with blood-soaked hands” — the Kurdish militia YPG, the leading faction in the SDF.

Ankara considers the YPG as part of the Turkish Kurdish insurgency PKK. The Erdoğan Government is seeking the removal of the militia from a 32-km (20-mile) deep “safe zone” along the Turkish-Syrian border, across the Kurdish cantons of Kobani and Cezire.

Syria Daily, Feb 10: Erdoğan Steps Up Attack on US Over Kurdish-Held North

US officials such as National Security Advisor John Bolton and Secretary of State Mike Pompeo have warned Turkey not to attack Kurdish-held territory. Last month Erdoğan rebuffed the message by refusing to meet Bolton in Ankara.

Donald Trump did not remark on either the Votel or Turkish comments on Sunday. Instead he repeated his headline declaration, somehow converting American withdrawal into “US control”.