Why Shamima Begum Should Be Allowed to Return to the UK 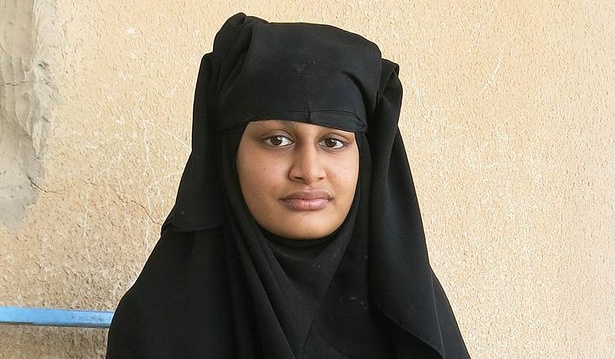 Dr Katherine Brown of the University of Birmingham writes for The Conversation:

One of the so-called “Bethnal Green Girls”, Shamima Begum, is looking to return home to the UK. After nearly four years living with the so-called Islamic State, the 19-year-old who is nine months pregnant, was interviewed by The Times newspaper in a refugee camp in Syria.

Coverage has focused on whether or not she should be “allowed” home, but there is little legal basis to deny her – and her unborn child – that right. The security minister, Ben Wallace, told the BBC she could face possible prosecution if she returned to the UK. Now the debate needs to move forward, and consider how best to treat her if she does return.

EA on BBC and Radio FM4: What Shamima Begum Shows Us About Dealing with ISIS
EA on talkRADIO: Shamima Begum and ISIS; Brexit; and Churchill

Part of the argument against letting Begum return to the UK, or for locking her up indefinitely if she did, is the idea that once someone becomes a terrorist, they are always a terrorist. This reaction stems from a fear of her carrying out a violent or criminal act in the future. Fear is what terrorist groups like IS want, because it undermines core British values and the way of life in the UK.

But let’s look at the risks. A study by researchers Thomas Hegghammer and Petter Nesser estimated that the rate of attacks by IS fighters returning to the West between 2011 and 2015 appeared to be just one in 360. An earlier study looking at jihadis returning to the West between 1980 and 2010 revealed that 11% became involved in domestic terror plots – and this was a maximum likelihood estimate due to the availability of the data. Such threats also reduce after one year of returning home. Another study found that rates of reoffending were lower than for those convicted of other types of crimes.

Rather than succumbing to the politics of fear, we must focus on the rule of law. While prosecuting transnational terrorism is difficult for practical and jurisdictional reasons – it is nevertheless possible.

In 2016, the Home Office estimated that one in eight “foreign fighters” returning home were prosecuted. Other women, such as Tareena Shakil, have returned to the UK from IS and been convicted. Shakil is currently serving a six-year jail sentence.

The UK must allow Begum a fair trial and allow the justice system to work. A fair trial would also uphold her human rights, and acknowledge that these mean that she should be supported in her journey towards reintegration and rehabilitation.

Shamima Begum, one of three pupils from Bethnal Green who ran away from London aged 15 to join Islamic State in Syria, has been found by The Times in a refugee camp after escaping the jihadists’ final showdown. pic.twitter.com/kFcG02lvaq

The challenge of reintegrating, demobilizing, and rehabilitating former terrorists is not new. The UK has a track record of doing so in Northern Ireland, and in Germany and Scandinavia, “exit” programs have been set up to help people leave neo-Nazi groups.

The difficulty is that such programs often work on the presumption that people want to abandon violent extremism and voluntarily leave terrorist groups. The pathways to leaving an extremist group are as diverse as the radicalization process – sometimes the motives can be practical and pragmatic, such as battle fatigue or disillusionment with the group, while other times they are ideological, with people no longer believing in the cause.

From the interview she gave to The Times, it appears Begum hasn’t abandoned the cause and only left because of the scale of fighting in which her side was losing. She criticized IS, saying it could no longer claim to be a “caliphate”, as it could not support her and her unborn child, but she maintained that she has “no regrets”. From these words she appears unrepentant and so the reintegration and rehabilitation process will be harder – but not impossible.

There are examples from former rebels in Colombia and members of the Al Shabaab terrorist group in East Africa of successful rehabilitation and reintegration efforts despite participants still believing in “the cause” and still being in a conflict zone.

Yet disarmament, demobilization, and reintegration programmes face challenges. These include issues around recognizing women’s roles in terrorism, which can leave them without the appropriate support, and in not addressing the reasons why somebody joined a terrorist group. Participants in such programs can also face stigma and a backlash from their home communities.

Lessons must be learnt and future programs adapted accordingly, for example to recognize the importance of addressing all three core components of radicalization: beliefs, behaviors, and modes of belonging. Practically, this means providing skills for a better future, counselling to address trauma and beliefs and carefully monitoring who a person interacts with.

The UK has to uphold and promote the rights of victims of terrorist attacks as well, which includes treating them fairly and supporting their needs. This means that Begum and other returnees from IS territory must be held accountable for their actions. Given the challenges of a successful prosecution, any rehabilitation and reintegration programme must also consider a restorative justice component.

Restorative justice, such as that seen in Rwanda after the genocide, includes working to redress some of the harms caused by terrorism through community or advocacy work. For example, some “formers” of extremist groups work with young people, those at risk of radicalization, and those who are already radicalized. Some “formers”, such as Yasmin Mulbocus and Abdullah X, are forces for peace who actively counter the ideologies and activities of extremists.

A fair trial, rehabilitation, and restorative justice, as a combined response to Begum’s return could minimize her risk of joining a different extremist group and of carrying out a future attack. This three-pronged approach is also a powerful antidote to terrorist messages and their violence because it’s rooted in core British values: human rights and the rule of law.