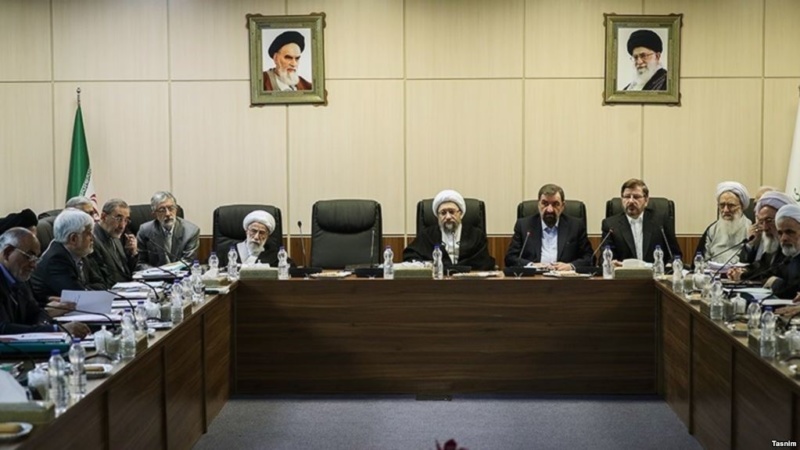 Iran’s Expediency Council meeting in Tehran, February 16, 2019. The empty seat is that of President Hassan Rouhani, who has not been attending Council meetings.

For the fourth time, the Expediency Council postponed a decision on accession to the Financial Action Task Force.

The Rouhani Government has pushed the legislation for months, and it has been approved by Parliament. But the Guardian Council, which oversees all measures, has blocked the bill to force consideration by the Expediency Council.

The European Union has made accession to the FATF a condition of vital economic assistance to Iran amid US sanctions and a gathering economic crisis. But Iranian hardliners objected that the step could affect Tehran’s links with groups such as Lebanon’s Hezbollah and Palestine’s Hamas and Islamic Jihad.

Ten days ago, the European Commission approved a limited Special Purpose Vehicle, bypassing US sanctions for trade in Iranian oil and other commodities and goods. The Europeans linked the decision to concern about Iran’s missile development and activities in the Middle East and Europe, as well as the requirement of joining the international convention on terrorist finance.

Iranian officials initially welcomed the launch of the SPV, but soon turned against it because of “humiliating conditions”.

The dispute is likely to be resolved this week, not by the Islamic Republic but by the FATF.

The Paris-based organization is meeting from February 17 to 22. On the agenda is the deadline for an Iranian decision.

If Tehran does not agree to reform of banking and financial systems, the FATF will put Iran on a “blacklist” of suspect countries.

Expediency Council Secretary Mohsen Rezaei signalled on Friday that there will be no change in the Iranian position: “We are suspicious of…anti-terror financing legislation.”

He linked the matter to the issue of the Special Purpose Vehicle, complaining that it is initially limited to Iranian imports of pharmaceuticals, medical supplies, and food under a de facto barter arrangement: “Iran cannot directly receive any money for its oil through [the SPV]….Iran is only allowed to receive medicine and foodstuff for the crude oil it exports.”

Friday Prayer leaders, with guidance from the Supreme Leader’s office, reinforced the message. In Rasht, Rasoul Falahati criticized supporters of accession and said, “Europeans have placed shameful regulations for Iran on the top of their agenda.”