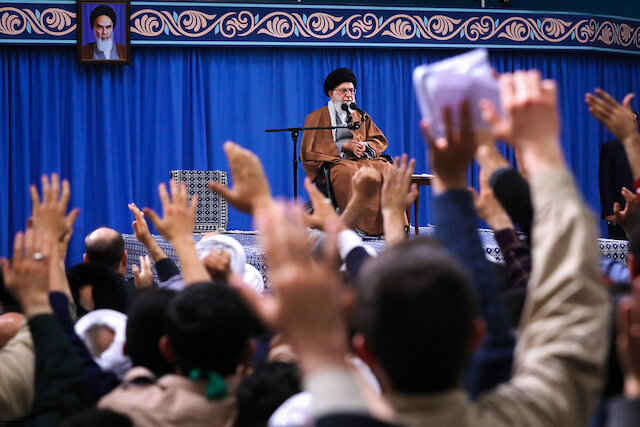 Iran’s Supreme Leader has launched another verbal attack on the US and Europe, in remarks so strident that Iranian media have edited and rewritten them.

On Monday, Ayatollah Khamenei used an audience in Tehran to deride last week’s US-organized summit in Poland, seeking cooperation over efforts to pressure and undermine the Iranian regime. In the account published on his website, Khamenei says:

The wisdom-lacking or first-class fools representing the heads of the U.S. regime get enraged and are franticly doing anything they can: they hold Warsaw summit to call their intimidated, weak allies to make decisions against the Islamic Republic, but they fail.

This is also a sign of the enemy’s weakness. When the enemy is weak, it starts to huff and puff. The huff and puff should not scare the officials. When the Islamic Republic was a weak sapling, they could not do a single thing; now, they won’t be able to do anything.

But, for an unknown reason, Khamenei’s declaration that “the enemy’s ballyhoo should not dishearten the authorities” — initially reported by Fars, linked to the Revolutionary Guards — was not posted on his website. It was rewritten by Iranian media as “these clamors originate from weakness and should not dishearten the authorities or mislead some youth”.

More significant was the watering down of Khamenei’s attack on European countries, after the regime rejected the European Commission’s launch of a limited Special Purpose Vehicle to bypass US sanctions and trade in Iranian oil and other goods and commodities.

Initial summaries of the Supreme Leader’s remarks quoted, “Our enemies’ unclean hearts are full of enmity towards the Islamic Republic….Our officials should not be deceived by the Europeans….Don’t be fooled by Europeans.”

But later reports omitted “unclean”, with its connotation of being untouchable, such as an infidel or an animal.

Instead, the Iranian Students News Agency changed its text to: “I’m not telling the officials what to do, but I’m advising them to exercise caution so that they will not be tricked by [Europe] and cause problems for the country.”

After initially welcoming the European launch of the SPV, Iranian officials rejected it because of “humiliating conditions”, such as the criticism of Iran’s missile program and activities in the Middle East. They also noted that the mechanism is initially limited to imports of food, medical supplies, and pharmaceuticals into Iran.

The arrangement, while vital to Iran’s crippled economy, is further complicated because Tehran has balked for months at joining the Financial Action Task Force and an international convention against terrorist finance and money laundering.

Khamenei said on Monday that there is “a need for vigilance in dealing with the Europeans because they behave deceptively”.

“Biting the Hand That Feeds Them”

The Supreme Leader also turned his criticism upon Iranians whom he suspects of being disloyal. While hailing last week’s rallies for the 40th anniversary of the Islamic Revolution, he cited a bombing that killed 27 Revolutionary Guards in southeast Iran, hours after Khamenei called for a “second phase” of the Revolution.

“Some people, who benefit from the country’s peace and security enjoying their jobs and their favorite sports, bite the hand that feeds them,” Khamenei said.

Analysts said the Supreme Leader may have been referring to two Iranian football stars who publicly chided Foreign Minister Mohammad Javad Zarif after he said, “Today, we are all under pressure.”

Ali Karimi, a football legend from his days with Bayern Munich and the Iranian national team, responded on InstagramL “Which ‘we’ are under pressure Doctor [Zarif]? Strictly speaking, ‘you’ or ‘us'”?