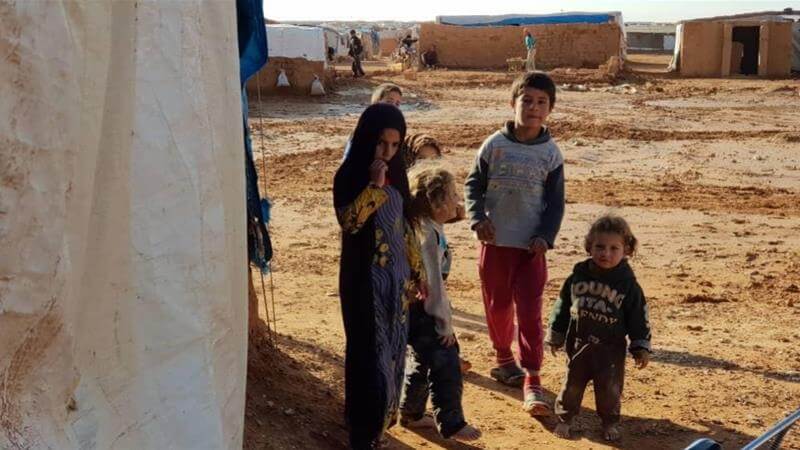 Russia is again pressing for the breakup of the Rukban camp, home to more than 40,000 displaced Syrians near the Jordanian border.

Moscow and the Assad regime have sought for months to dissolve the camp, where the displaced fled in 2015 when their home areas were attacked by the Islamic State.

The regime has cut off roads to the barren area of Rukban, allowing only two aid deliveries in more than a year. Jordan, which closed the border in June 2016, is not allowing movement of supplies or people except for those requiring urgent medical care. Dozens have died in the camp since last autumn amid the shortages of food and medicine, with the UN saying thousands of children are at risk.

The regime wants the displaced to move back to their home territory, but the residents fear detentions and forced conscriptions and are uncertain about the status of their property. Many wish to be transferred to opposition-held northwest Syria.

The Specter of “Humanitarian Corridors”

Russia is now promoting “humanitarian corridors”, the same tactic Moscow used during the protracted sieges of east Aleppo city and of the East Ghouta area near Damascus — and during the Russian-regime offensives that overran the territory and killed and injured thousands of civilians.

The Russian Defence Ministry announced on Friday that the corridors were “allowing the Syrian refugees to leave voluntarily to the places they choose to stay”. The head of Russia’s National Defence Control Centre, Mikhail Mizintsev, said yesterday that two checkpoints have been set up.

But residents and staff at the National Coalition for Syrian Revolutionary and Opposition Forces said the Russian declarations have not been accompanied with any communication with Rukban, let alone planning: “The camp inhabitants are not aware of the Russian move.”

One resident texted the message that the regime’s siege has been renewed:

The situation in the camp is not good, people are very afraid.

The Assad regime closed all the corridors and prevented cars, vegetables, and other items from entering the camp.

Video from Russian State outlet RT showed military personnel and aid staff, but no residents, at a checkpoint:

Two weeks ago, the second aid convoy in 13 months was finally permitted by the Assad regime. Aid workers asked residents, “Are you hoping to return to regime [territory] or go to the [rebel-held] north?”

But Ahmad al-Zgheira, a member of Rukban’s local administration, confired that Moscow’s declaration of a corridor was not backed up with action: “There hasn’t been any coordination with the camp or any official notification. It’s impossible that it will happen on Tuesday.”

Jens Laerke, spokesperson for the UN Office for the Coordination of Humanitarian Affairs, said OCHA is not involved in the Russian maneuver: “[The UN] reiterates its call that any return or relocation movement of the Rukban population upholds key principles, with any return or relocation being voluntary, safe, dignified and well-informed and in line with minimum protection standards.”

A “source with knowledge of the matter” said on Sunday that the corridors are not part of ongoing trilateral talks between Russia, the US and Jordan about the dissolution of the camp.

The US State Department issued a statement, “Any unilateral process to arrange departures that is not transparent or does not allow for informed decision-making by Rukban residents is not acceptable.”

Meanwhile, residents said conditions continue to deteriorate with the shortages of food, medicine, and hygience products and the absence of doctors.

Qassem, a 29-year-old father of two, talks about the dilemma that no corridor can resolve:

I can’t go back to my town. I’m wanted for the army reserves, I’ve been wanted since the beginning of the revolution….

[But] Rukban doesn’t have anything. It’s just desert. Rukban has nothing but God.

Video circulated by a pro-opposition activist:

Here's another view of #Russia & #Syria Regime's 'Humanitarian Corridors' at #RukbanCamp. People aren't exactly lining up in this one either, despite the fact the #Assad has an all out 'Starvation Siege' imposed on #Rukban now to force them to 'return' to Regime. pic.twitter.com/MLr0DNVF1h