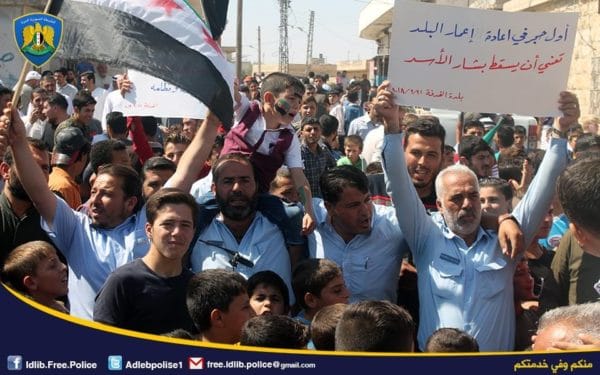 The Free Syrian Police have announced their dissolution in northwest Syria in the face of an advance by the hardline Islamist bloc Hay’at Tahrir al-Sham.

Sources inside the Police told Syria Direct on Thursday of the decision. They said members were notified by electronic message late Wednesday that the organization will “dissolve definitively”. The branch in Idlib city issued an official statement for the suspension of work in all departments “until further notice.”

Deputy President Hamidi Mater announced his resignation, and one source said that “it is expected that the entire leadership will resign within the coming hours and days”.

Since 2012 the Free Syrian Police had operated in Idlib and western Aleppo Provinces, under the authority of local councils affiliated with the opposition Syrian Interim Government.

HTS, which has controlled much of Idlib Province since 2017, has carried out a rapid advance in the past 10 days in western Aleppo, northern Hama, and parts of Idlib. The military operations have forced the dissolution of the faction Nour ed-Din al-Zinki. Ahrar al-Sham, once the largest rebel group in Syria, has halted activity in northern Hama, its main position.

On Thursday, HTS and the Turkish-backed National Liberation Front of rebel groups announced an agreement recognizing the latest HTS advances. Its Syrian Salvation Government will carry out administrative, civil, and judicial duties.

Residents in Atareb — a town in western Aleppo seen as a symbol of the Syrian Revolution, and of resistance to HTS and the Islamic State — say local affairs are unaffected so far, following HTS’s entry last week

Syria Daily, Jan 6: The Fight for a Revolution Town in the Northwest

We are currently cautious about moving around because the violations don’t usually happen in the first few days.

[HTS] will fight any writing or peaceful movements against them. People’s activities will be different in Atareb, compared with before.

A council representative in western Alepp says negotiations for handover of control are ongoing.