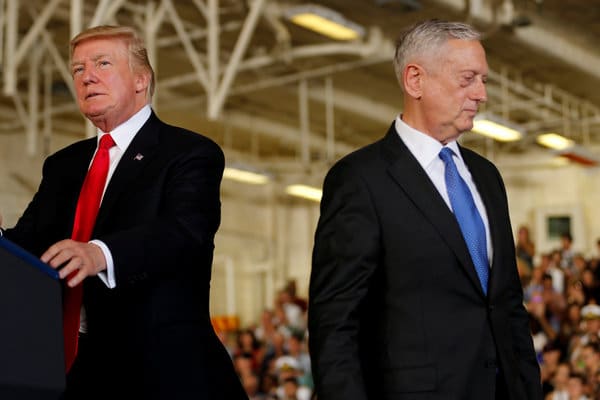 Defense Secretary Jim Mattis quits, sharply rebuking Donald Trump over the uncertainty of his actions and approaches to foreign policy and military operations.

Mattis’ departure was announced by Trump in a pair of tweets on Thursday:

General Jim Mattis will be retiring, with distinction, at the end of February, after having served my Administration as Secretary of Defense for the past two years. During Jim’s tenure, tremendous progress has been made, especially with respect to the purchase of new fighting….

….equipment. General Mattis was a great help to me in getting allies and other countries to pay their share of military obligations. A new Secretary of Defense will be named shortly. I greatly thank Jim for his service!

Mattis reportedly decided to resign after he failed on Thursday to convince Donald Trump to reverse Trump’s order to withdraw all US troops from Syria.

The former four-star Marine general went to the White House, with his resignation letter written. When Trump refused to pull the order, issued over the objections of almost all civilian and military advisors, Mattis returned to the Pentagon and ordered staff to print 50 copies of his resignation letter and distribute them around the building.

However, the Defense Secretary had built up a series of disagreements — albeit in private — with Trump as efforts failed to control the President’s unpredictable behavior or to succeed in informing him. Fellow generals such as then-National Security advisor H.R. McMaster and White House Chief of Staff John Kelly, seen as the other “adults in the playground” with Mattis, called Trump an “idiot” over his failure to comprehend issues from Afghanistan to NATO to America’s nuclear arsenal. The advisors were also troubled by Trump’s admiration for Russian President Vladimir Putin, maintained despite Russia’s aggressive foreign policy and interference in US affairs.

Mattis used the resignation letter as a challenge to Trump:

Our strength as a nation is inextricably linked to the strength of our unique and comprehensive system of alliances and partnerships. While the US remains the indispensable nation in the free world, we cannot protect our interests or serve that role effectively without maintaining strong alliances and showing respect to those allies.

He continued with a perspective that aimed at Trump’s relationship with Putin.

We must be resolute and unambiguous in our approach to those countries whose strategic interests are increasingly in tension with ours. It is clear that China and Russia, for example, want to shape a world consistent with their authoritarian model – gaining veto authority over other nations’ economic, diplomatic, and security decisions – to promote their own interests at the expense of their neighbors, America and our allies….

My views on treating allies with respect and also being clear-eyed about both malign actors and strategic competitors are strongly held and informed by over four decades of immersion in these issues.

But then Mattis threw up his hands in resignation, “You have the right to have a Secretary of Defense whose views are better aligned with yours on these and other subjects.”

The former general concluded, “I very much appreciate this opportunity to serve the nation and our men and women in uniform,” but did not mention Trump.

There isn't a single word of praise for Trump in Mattis's resignation letter.

"He was the one that was elected to be president, to be the Commander in Chief"

But even Trump’s most important allies could not hide discontent. Senator Majority Leader Mitch McConnell said in a statement, “I am particularly distressed that he is resigning due to sharp differences with the President on these and other key aspects of America’s global leadership.”