Iran Daily: Tehran Gets Turkish Pledge Over Economy — But Does It Mean Anything? 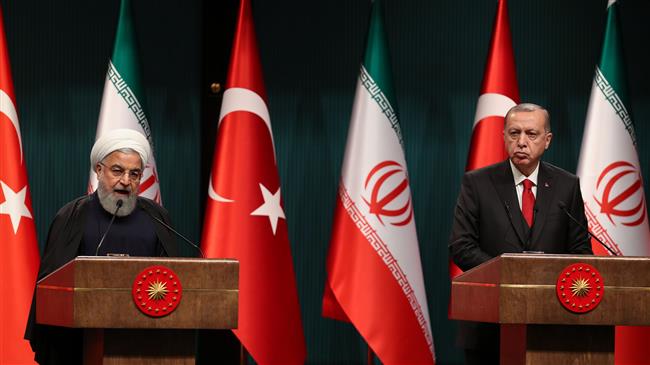 Iran and Turkey have repeated their long-stated goal of $30 billion in annual trade, amid Iranian President Hassan Rouhani’s two-day visit to Ankara.

Rouhani and Turkish counterpart Recep Tayyip Erdoğan issued the statement on Thursday after they chaired a session in Ankara of the High Council for Iran-Turkey Strategic Cooperation.

Rouhani said at the Iran is ready to turn US sanctions into an opportunity to provide Turkey with its energy requirements. He said Tehran is ready for Turkish investors to play a more active role in the Iranian energy market.

Iran and Turkey first set the $30 billion figure in February 2011, saying it should be achieved by 2016. In January 2015, Iranian Speaker of Parliament Ali Larijani and Erdoğan restated the objective.

The economic links have taken on fresh urgency amid the comprehensive US sanctions, including on the energy and financial sectors, imposed on Iran from November 5. The Trump Administration is hoping to spur regime change in the Islamic Republic by breaking trade, investment, production, and employment — all of which have also been affected by long-term internal problems in Iran.

Turkey is among Iran’s largest markets. It is one of eight countries to receive a waiver from US sanctions over oil purchases, but only if Ankara reduces the imports and only through March.

Rouhani and Erdoğan put out the standard promotion of “closer bilateral relations in all areas”. They implicitly referred to other topics, such as their respective positions in Syria’s conflict, through citations of the “fight against terrorism” and a contribution to “the region’s peace and stability”.

On Syria, the leaders — whose countries have supported opposite sides in the 93-month conflict, reaffirmed a commitment to protecting “sovereignty, territorial integrity”, and political unity. The statement came as Turkey, whose forces are alongside rebels in northern Syria, is threatening offensives against Kurdish-held areas.

Iran, Turkey, and Russia have seized the political initiative from the UN and other countries, although their “Astana process” has brought little progress towards a resolution of the conflict.

The two sides criticized Donald Trump’s withdrawal of the US from the July 2015 nuclear deal and the American sanctions.

Rouhani said US policies amount to “terrorism” but asserted, “The era of bullying is over, and nations today make decisions based on their common interests.”

In Ankara along with senior Delegation headed by President @HassanRouhani for 5th Meeting of High Council for Iran-Turkey Strategic Cooperation. As neighbors who have enjoyed 400 yrs of peace, we are committed to working together to promote security & stability in our region. pic.twitter.com/ogcTmbyVml