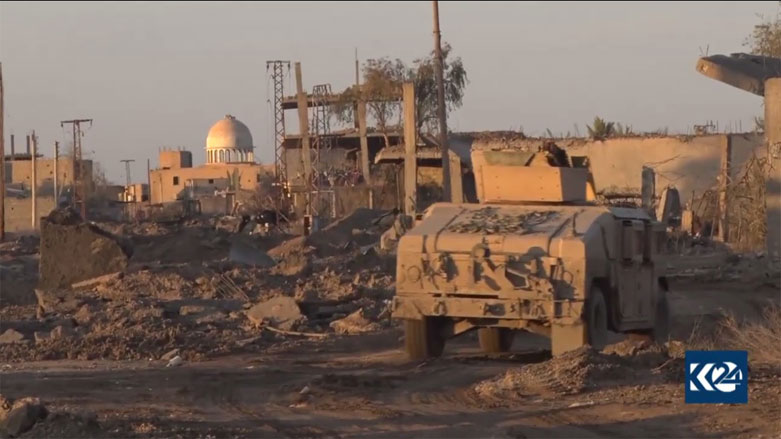 An armored vehicle of the Syrian Democratic Forces on west side of Hajin, eastern Syria, December 11, 2018 (Heysem Heci/Kurdistan 24)

The US-supported, Kurdish-led Syrian Democratic Forces say they are close to taking control of the last major Islamic State-held town in Syria.

Spokeswoman Lilwa al-Abdallah said on Friday that the SDF will soon capture Hajin, in eastern Syria near the Iraqi border:

Military operations are ongoing to fully end Daesh….Our forces are advancing in fierce battles. Soon, we will celebrate the full liberation of Hajin from the hands of the mercenaries.

An official in the Kurdish militia, the leading group in the SDF, said small pockets of Islamic State resistance will be suppressed in the next two days.

SDF commander-in-chief Mazloum Kobani said Thursday that at least 5,000 ISIS fighters are still in the Hajin pockets. He said about 2,000 are foreign members, mostly Arabs and Europeans with their families.

The SDF launched the offensive this summer to take the remaining ISIS enclave, in Deir ez-Zor east of the Euphrates River. It entered Hajin in October, but was pushed back by an Islamic State counter-attack.

Operations were also complicated by Turkish shelling of the Kurdish militia YPG, the leading faction in the SDF, in late October. The SDF briefly suspended the offensive in protest while the US military pledged to set up observation posts on the Turkish border.

The SDF advance resumed, and has continued this week despite the promise of Turkish President Recep Tayyip Erdoğan that Ankara’s offensive against the YPG east of the Euphrates River is imminent.

The Islamic State also remains in desert terrain west of the Euphrates, in territory controlled by pro-Assad forces.