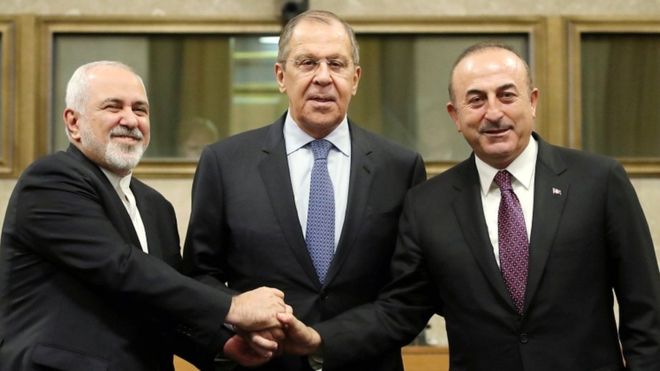 Russia, Turkey, and Iran have failed to reach agreement on the composition of a constitutional committee to help resolve Syria’s 93-month conflict.

The foreign ministers of the three countries, meeting in Geneva, signed an agreement in principle for a committee leading to “a viable and lasting Syrian-owned, Syrian-led, UN-facilitated political process”.

But they failed to conclude the make-up of the 150-strong committee — 50 members each from the Assad regime, the opposition, and civil society and “independent” groups — with diplomats saying Russian Foreign Minister Sergey Lavrov had objected to five names.

In Geneva alongside Russian & Turkish counterparts to move fwd on a constitutional committee to resolve #Syria crisis. We always insisted on a political solution led and owned by Syrians. The West has now been compelled to accept this. But it needs to facilitate; not dictate. pic.twitter.com/MYg5pWouAQ

UN envoy Staffan de Mistura, who has pursued the committee since January and is quitting at the end of December, was absent from the gathering.

De Mistura said in a statement:

I believe there is an extra mile to go in the marathon effort to ensure the necessary package for a credible, balanced and inclusive constitutional committee, and for including a balanced chairing arrangement and drafting body and voting threshold — to be established under UN auspices in Geneva.

Turkish Foreign Minister Mevlüt Çavuşoğlu, while declaring “important contributions” to the creation of the panel, pointed to the Russian objection to some of the membership: “The UN will of course carry out necessary work on the nominated names in the coming process.”

The Assad regime has long objected to proposed members from the civil society and “independent” groups.