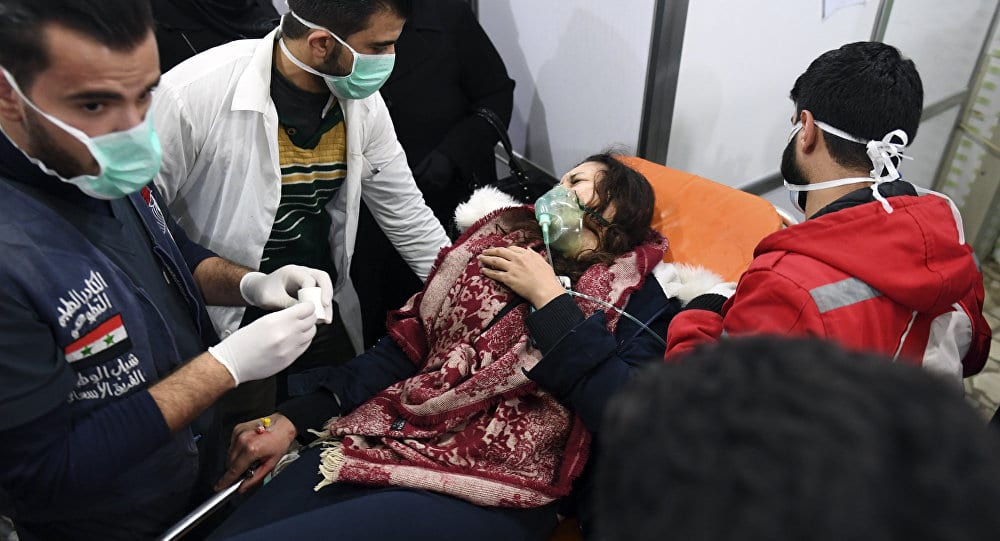 Russia has struggled to defend its claim of a November 24 “chemical attack” on regime-held Aleppo, following US and UK statements pointing to Russian and regime use of tear gas to blame Syria’s rebels.

On Friday, the US State Department said it “has credible information that pro-regime forces likely used tear gas against civilians in Aleppo”, Syria’s largest city. The UK Foreign Office said the incident was staged was to frame the opposition “or a [pro-Assad] operation which went wrong and from which Russia and the regime sought to take advantage”.

Pro-Assad outlets received global attention when they pronounced that more than 100 people had been injured by “toxic gas”, posting video and photographs of civilians being treated in hospital. But neither Russia nor the regime produced any evidence of chemical use, with their photos showing a 105-mm mortar — too small to carry chlorine — at the alleged site. Meanwhile, rebels denied they had the capability for the assault, and pro-opposition sites claimed that the attack had come from pro-Assad forces to the south of Aleppo city.

Moscow eventually said the Organization for the Prohibition of Chemical Weapons — despite a Russian veto on its mandate in November 2017, preventing it from attribution of responsibility for attacks — should visit the attack sites. However, the inspection was never arranged.

The Russian Defense Ministry tried to regain propaganda ground on Saturday, “The US State Department’s hysterical statement, alleging that the November 24 chemical attack by terrorists in Aleppo was allegedly staged, [is] an attempt to exert pressure on the OPCW in order to hinder an unbiased investigation.”

The Ministry repeated its unsupported allegation that “Western special services” — portrayed as French, British, or US agents in different Russian accounts — have given “terrorists” and White Helmets rescuers “toxic agents”: “Each time, the peaks of such supplies were synchronized with ungrounded statements by the US Department of State and other American agencies on their preparedness for a knockdown missile blow on Syria in case of another alleged use of chemical weapons by the Syrian government.”

The Ministry did not explain why access has not yet been arranged. Instead, it insisted the US statement was trying to absolve “international terrorists operating in Idlib, linked with pseudo-rescuers from the White Helmets who have backstabbed their Western patrons with their provocation”.

The Assad regime’s SANA news agency did not attempt a rebuttal of the US and UK. Instead, it headlines, “Two Sisters Create Beautiful Objects by Recycling Old Stuff to Produce Amazing Items”.