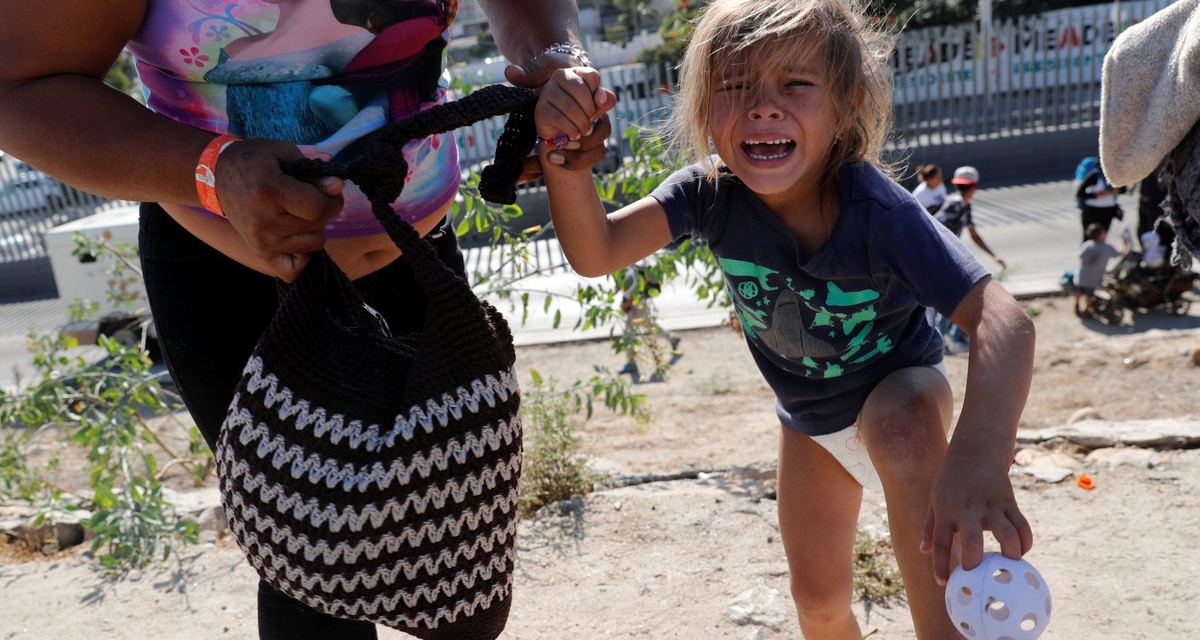 A migrant child cries amid firing of tear gas by US officers on the California-Mexico border, November 25, 2018

As Donald Trump pursues his anti-immigrant policy, US officers fire tear gas on about 500 migrants, including women and children, at the Mexico border.

After months of Trump’s portrayal of the migrants as an “invasion” of the US — and his Administration’s “zero tolerance” policy, which has separated children from parents and sought indefinite detention and limits on asylum — the first use of force was on Sunday as about 500 migrants tried to cross the border into southern California.

Tear gas was used, reportedly after a hole was cut in a border fence, and Mexican riot police pushed the migrants back towards makeshift camps in Tijuana, Mexico. The crossing at San Ysidro, California, among the largest in the US, was closed for hours to pedestrians and vehicles.

Thousands of migrants, many of them from a caravan moving through Central America, have gathered in Tijuana. The marchers on Saturday moved through a riverbed when they were blocked by federal police.

Ana Zuniga, 23, from Honduras cradled 3-year old daughter with red burning eyes. “We ran but when you run the smoke smothers you more.” Said US agents began launching gas when migrants opened small hole in concertina wire at bottom of Tijuana River. She didn’t see anyone get thru

US officials are entering talks with Mexican counterparts to end the American practice of granting asylum hearings to those who cross the border. Instead, Mexico is being asked to hold the migrants indefinitely while applications are filed.

Border Patrol fired off shots at a group trying to go through the fence. We ran and hid under train. They sent in CS gas. Babies are scared and crying. pic.twitter.com/FCM1DcG2o8

On Saturday, Trump threatened to close the border and continued to assail courts who have issued a restraining order against any end to asylum inside the US.

After Sunday’s incident, Trump responded with a lie about his Administration’s policy from April which separated about 2,800 children from immigrant parents, falsely claiming that it was Presidents George W. Bush and Barack Obama who ordered this:

.@60Minutes did a phony story about child separation when they know we had the exact same policy as the Obama Administration. In fact a picture of children in jails was used by other Fake Media to show how bad (cruel) we are, but it was in 2014 during O years. Obama separated….

….children from parents, as did Bush etc., because that is the policy and law. I tried to keep them together but the problem is, when you do that, vast numbers of additional people storm the Border. So with Obama seperation is fine, but with Trump it’s not. Fake 60 Minutes!

NBC’s Jacob Soboroff, who has covered the Trump Administration’s zero-tolerance policy and the separation issue, comments:

As I told @chrislhayes after I toured that Border Patrol processing station, Trump’s separation policy was worse than it looked in photos.

That Trump says *anyone* other than him is responsible for the trauma these 2,600+ kids went through is complete BS. pic.twitter.com/WOn1VmeNsr

Department of Homeland Security Secretary Kirstjen Nielsen said in a statement about Sunday’s use of tear gas: “DHS will not tolerate this type of lawlessness and will not hesitate to shut down ports of entry for security and public safety reasons.”

Over the objections of the military, Donald Trump has ordered that troops can fire live ammunition on migrants who throw stones — as some did on Sunday after tear gas was used on them.

Trump has sent about 5,800 troops to the border, but they are deployed in southern Texas, hundreds of miles from the California-Mexico frontier.

Nielsen did not refer to the order but left open the possible responses by US officers, including those of Customs and Border Protection.

Today @CBP personnel were struck by projectiles thrown by caravan members. Such actions are dangerous & not consistent w peacefully seeking asylum. The perpetrators will be prosecuted. I will continue to aggressively support DHS personnel as they work to safely secure our border.

This mother -total despair + exhaustion in her eyes after she walked all day trying to get to a US port of entry 2 ask 4 asylum but all were blocked by police -now she’ll walk back to the shelter, sleep another night in the cramped stadium on the floor -w/ no way to move forward pic.twitter.com/0aWpeGC1We 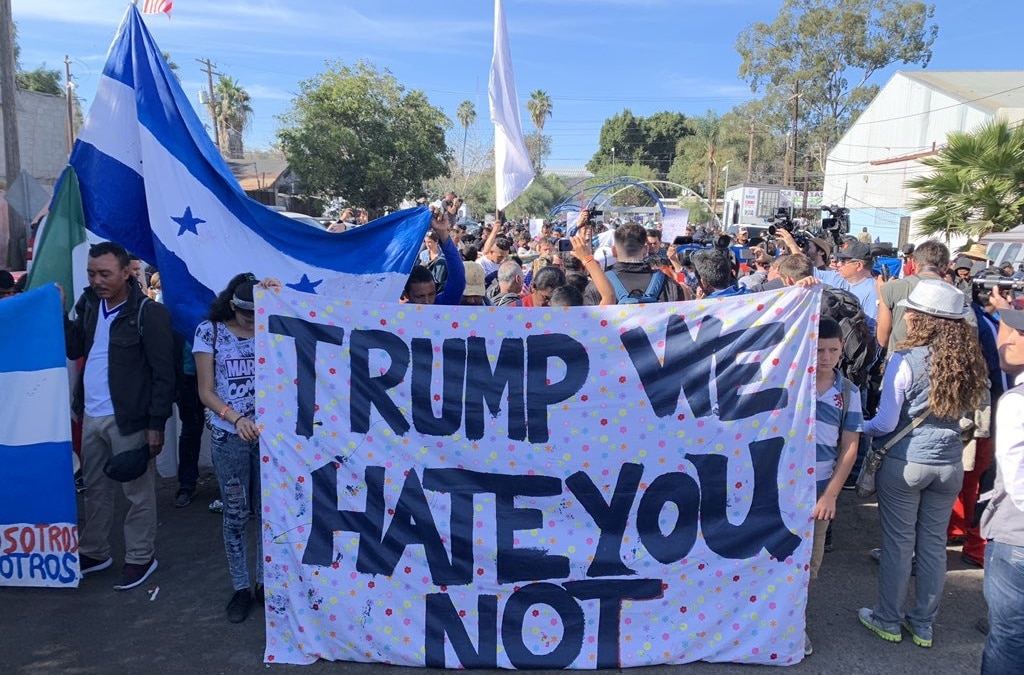 Current Situation: Migrants broke through this wooden fence to try and cross into the US via the train tracks and are now being pushed back by riot police – the border crossing remains closed and the migrants have nowhere to go but to turn around and go back #MigrantCaravan pic.twitter.com/nwBYQ2EhIV

Federal police are telling people to go back to the stadium if they want to “conserve an opportunity.” pic.twitter.com/OfYuB73xvI 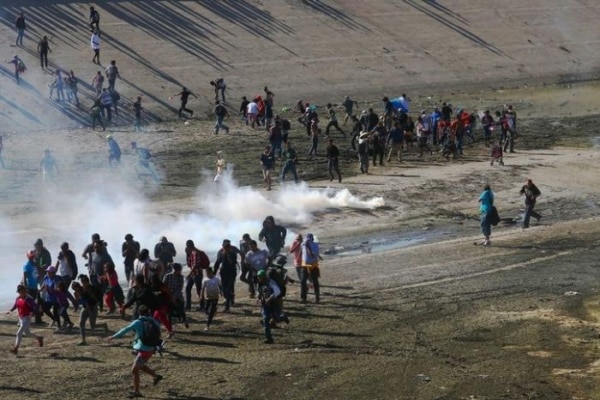 A former Homeland Security officer said, in an interview broadcast on Sunday, that the Trump Administration had no interest in tracking children separated from their immigrant parents.

Scott Shuchart told CBS’s “60 Minutes” that Homeland Security was not consulted about Trump’s executive order that separated the families at the border and took children up to thousands of miles away: “We would’ve had advice on the way that needed to be done, on the recordkeeping that needed to be done. And our advice on that wasn’t sought out. And when we tried to provide it, it was ignored.”

He criticized, “If you’re going to separate families in the pursuit of an immigration policy, it was irresponsible to push that on top of a system that wasn’t prepared on the backend to allow the families to be reconciled later.”

The Trump administration said 2,600 children were taken from their parents, but 60 Minutes said records show the number was closer to 5,000.

Cecilia Munoz, director of the Domestic Policy Council in the Obama Administration, summarized, “I don’t know what part of your soul has to be missing to say, ‘We’ll take an infant from its mother with no provision about how they will ever get back together again.” They might never see each other again.”

60 Minutes also established that the Trump Administration pursued a pilot program of separation in the El Paso sector of Texas in summer 2017, nine months before “zero tolerance” was announced. The reason was “deterrence” of immigration.

It is unknown how many children were taken in the pilot program.