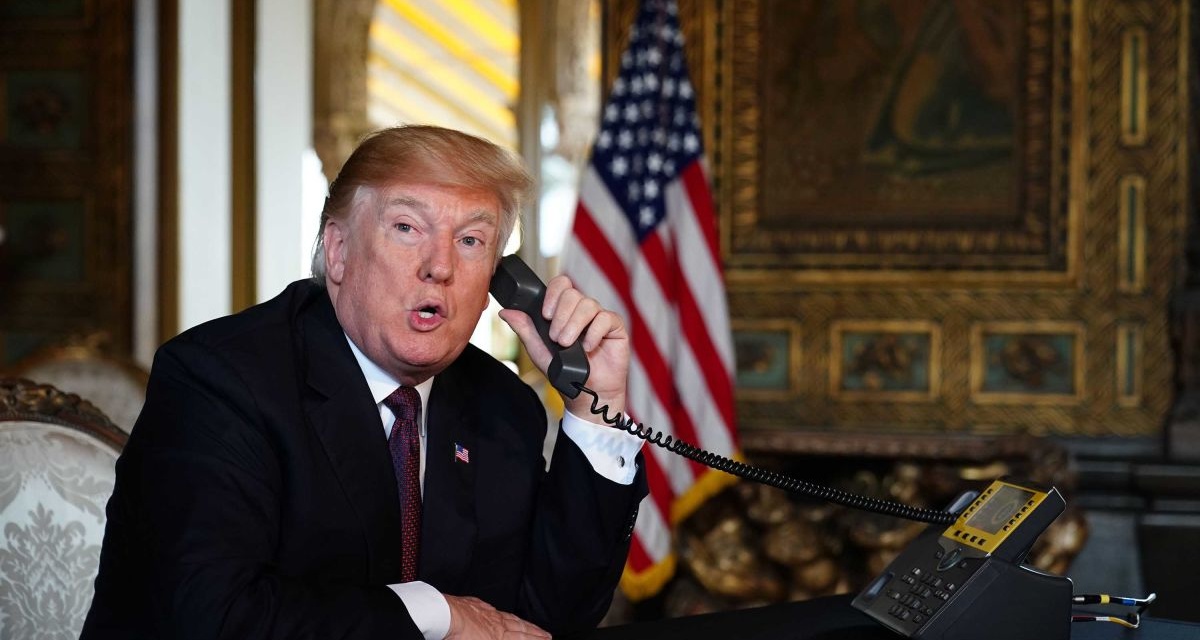 Donald Trump makes Thanksgiving calls to US military commanders from his Mar-a-Lago resort in Florida, November 22, 2018

Donald Trump uses Thanksgiving phone calls to promote his anti-immigrant rhetoric, his derision of US courts, his tariffs, and himself.

In traditional holiday calls to US military commanders around the world, Trump broke with tradition to make inflammatory statements in ongoing battles over policy and operations.

Speaking from his Mar-a-Lago resort in Florida, Trump used the call with Air Force Gen. David Lyons in Afghanistan to compare the anti-terrorism mission with his attempts to block immigrants, bragging about “barbed wire plus …the ultimate”.

Large numbers of people are forming at our border and I don’t even have to ask you, I know what you want to do, you want to make sure that you know who we’re letting in. And we’re not letting in anybody essentially because we want to be very, very careful. You’re right, you’re doing it over there. We’re doing it over here.

Trump then continued his assault on the judges who have challenged his anti-immigration orders, most recently a 9th Circuit Court justice’s dismissal of an Administration curb on the right to asylum: “It’s a terrible thing when judges take over your protective services, when they tell you how to protect your border. It’s a disgrace.”

After the phone calls, Trump continued to assail the 9th Circuit: “If we find that it gets to a level where we are going to lose control or our people are going to get hurt, we will close entry into the country for a period of time until we can get it under control.”

He emphasized, “The whole border.”

Our highly trained security professionals are not allowed to do their job on the Border because of the Judicial Activism and Interference by the 9th Circuit. Nevertheless, they are working hard to make America a safer place, though hard to do when anybody filing a lawsuit wins!

Speaking to a Navy comander in Bahrain, Trump hailed his tariffs and trade wars with proclamation of the US being ripped off by other countries: “As you know, trade for me is a very big subject….We don’t have any good trade deals.”

The confused commander spoke of goods moving through the waters off Bahrain, the base of the US 5th Fleet: “We don’t see any issues in terms of trade right now.”

Trump quickly jumped to hurricane response, ignoring issues such as thousands of deaths and recovery failures in Puerto Rico to talk about rescues by the Coast Guard: “Waves like record-setting. It’s been record-setting. The one hurricane in Texas they say dumped more water, and it was more violent in terms of water, than anything we’ve ever had in the country.”

And he complained that a new Navy ship was using electromagnetic catapults to propel planes: “Steam is very reliable, and the electromagnetic, unfortunately, you have to be Albert Einstein to really work it properly.”

The commander responded, “You have to be Albert Einstein to run the nuclear power plants that we have here, as well. But we’re doing that very well. I would go, sir, with electromagnetic.”

Trump also used the calls and the follow-up impromptu session with reporters to continue his absolution of Saudi Arabia’s Crown Prince Mohammad bin Salman over the murder of journalist Jamal Khashoggi.

Two days after shutting down a leaked CIA report that the Crown Prince was responsible for Khashoggi’s murder and dismemberment in Turkey on October 2, Trump again dismissed his agency by lying about their assessment:

They have not concluded. Nobody’s concluded. I don’t know if anybody’s going to be able to conclude that the Crown Prince did it. They said he might have done it. That’s a big difference.

Trump went beyond his Tuesday statement that the Saudi alliance was necessary to confront Iran’s regime, saying that diminished relations with Riyadh would cause “a global depression” and the loss of “hundreds of thousands of jobs”, as well as leaving Israel defenseless.

Asked who should be deemed responsible for the murder, Trump said, “Maybe the world should be held accountable, because the world is a vicious place”.

Trump got personal in some of his answers. He defended daughter Ivanka over her “very innocent” use of a personal e-mail account for Government correspondence, insisting it was nothing like the controversy over Hillary Clinton’s e-mails in the 2016 Presidential campaign.

Asked for what he was most thankful on Thanksgiving, Trump replied, “I made a tremendous difference in this country.”