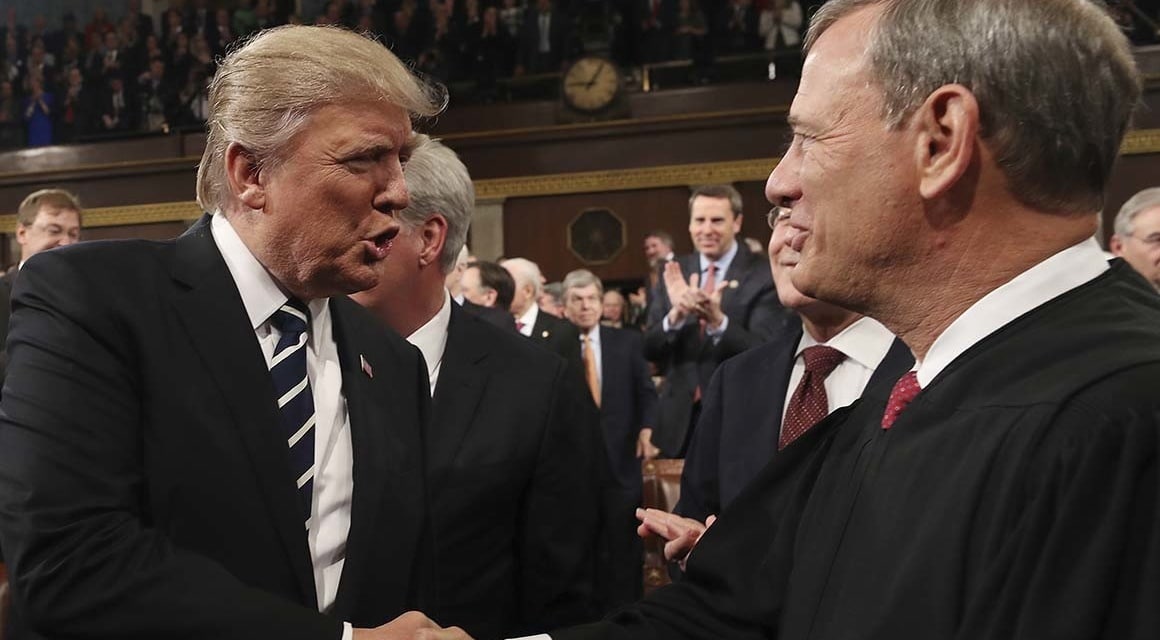 Roberts’ unprecedented intervention was prompted by Trump’s assailing of a Federal court justice, who ruled against the Administration’s attempt to restrict asylum, as “an Obama judge”.

Roberts responded in a statement to the Associated Press:

We do not have Obama judges or Trump judges, Bush judges or Clinton judges.

What we have is an extraordinary group of dedicated judges doing their level best to do equal right to those appearing before them. That independent judiciary is something we should all be thankful for.

During the 2016 campaign and since taking office, Trump has derided judges who issued rulings that he did not like, including restraints on his “Muslim Ban” and on anti-immigrant measures as well as personal matters such as Trump University’s alleged fraud.

Roberts, appointed by President George W. Bush in September 2005, had refrained from comment as Trump called him an “absolute disaster”, accused federal judge Gonzalo Curiel — presiding over the Trump University case — of bias because of his Mexican heritage, and blasted another federal judge in the Muslim Ban case as a “so-called judge”.

In the Supreme Court’s 5-4 decision in June 2018 upholding a revised Muslim Ban on entry into the US, Roberts wrote, “Plaintiffs argue that this president’s words strike at fundamental standards of respect and tolerance, in violation of our constitutional tradition. But the issue before us is not whether to denounce the statements.”

But on Wednesday he reacted to Trump’s derision of Judge Jon Tigar, who ordered the Administration to resume accepting asylum claims from immigrants, irrespective of where or how they entered the US.

Trump wasted no time in responding with a series of unsupported claims:

Sorry Chief Justice John Roberts, but you do indeed have “Obama judges,” and they have a much different point of view than the people who are charged with the safety of our country. It would be great if the 9th Circuit was indeed an “independent judiciary,” but if it is why……

…..are so many opposing view (on Border and Safety) cases filed there, and why are a vast number of those cases overturned. Please study the numbers, they are shocking. We need protection and security – these rulings are making our country unsafe! Very dangerous and unwise!

Trump later continued his attack on the 9th Federal Circuit Court in San Francisco, which has checked his Muslim Ban and anti-immigrant executive orders, as “a terrible, costly and dangerous disgrace” and “a dumping ground for certain lawyers looking for easy wins and delays”.

Threatening executive interference to limit the court, Trump warned, “Much talk over dividing up the 9th Circuit into 2 or 3 Circuits. Too big!”

Despite the court challenges, the Trump Administration is pressing its anti-asylum initiative.

The Administration will try and preent claims within the US by mandating that Central Americans will have to wait in Mexico while applications are processed, according to “internal planning documents and three Department of Homeland Security officials familiar with the initiative”.

Under the “Remain in Mexico” plan, Migrants who cannot establish a “reasonable fear” of persecution in Mexico will be blocked at the border.

Procedures allow those who establish a fear of return to their home countries to avoid immediate deportation and remain in the US until they can get a hearing with an immigration judge.

Under the Administration’s “zero tolerance” policy launched in April, attempts have been made to prevent immigrants reaching ports of entry to file asylum claims. But Judge Jon Tigar’s ruling this week said that those crossing the US border must have the opportunity to make a claim, even between ports of entry.

A Mexican official said the country’s immigration law does not allow those seeking asylum in another country to stay in Mexico.

Senior White House advisor Stephen Miller, the driving force behind Trump’s anti-immigration order, has pushed for immediate implementation of the Remain in Mexico plan, but other officials have expressed concern given sensitive negotiations with the Mexican Government.

The initiative was discussed at the White House on Tuesday. The new rules will take effect as soon as Friday, according to “two Department of Homeland Security officials familiar with the plans”, but DHS spokeswoman Katie Waldman said late Wednesday saying there are no immediate plans for implementation.

About 6,000 migrants are in the Tijuana, Mexico area. Several thousand more are en route to the city as part of caravans.

US border officials have allowed about 60 to 100 asylum seekers to approach the San Ysidro, California port of entry each day for processing.