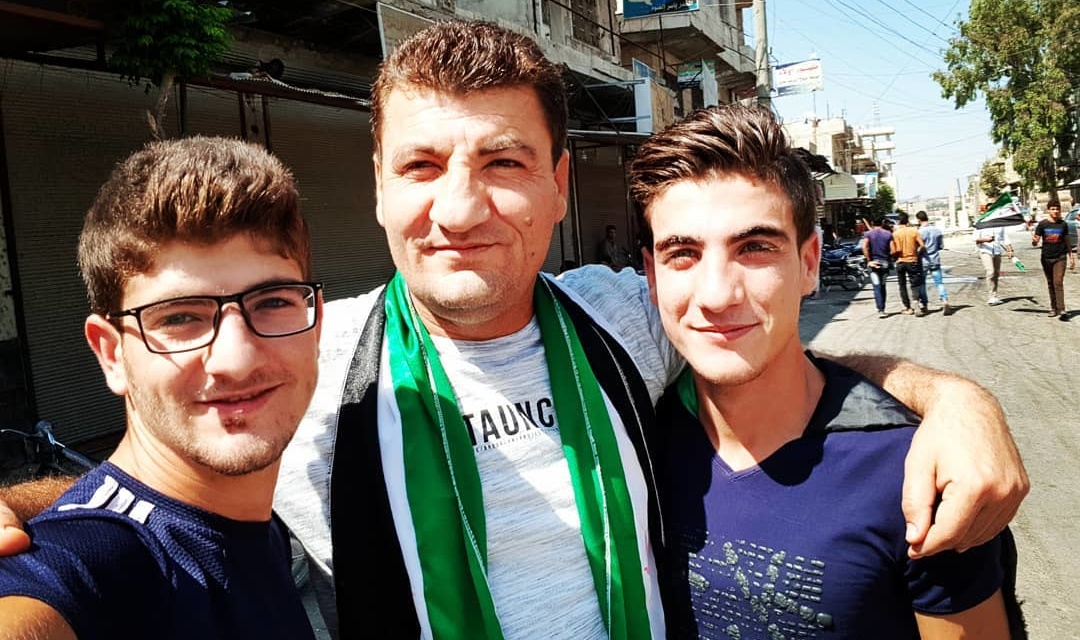 Raed Fares with his sons at a demonstration in Kafranbel, Syria, September 2018

An image from the funeral of Raed Fares:

The last banner in #Kafranbel
Rest in peace #Raed_Fares pic.twitter.com/6lcJZrS1Mj

Raed Fares and Hamoud Juneid, two of the leading civil society activists in Syria, were assassinated on Friday.

Saleh and Juneid were killed by masked gunmen in Kafranbel in Idlib Province in northwest Syria.

The two men were instrumental in Kafranbel’s iconic protests from 2011, with banners that drew international attention and broadcasts from Radio Fresh. The demonstrations highlighted the goals of the Revolution, challenged the war crimes of the Assad regime, and criticized the international community for its failure to protect Syria’s civilians.

Fares was active in demonstrations throughout this autumn.

Kafranbel: 21 Sep 2018
Demonstration against Russia, Assad and all kinds of Terrorism
the song says: “Syria will be a Free Country”
PART 2 pic.twitter.com/SvapeBdGRq

In June, he wrote in The Washington Post that the US, which has frozen backing of recovery and civil society in northern Syria, should resume support of Radio Fresh: “The terrorist groups (and the regime) see us as a direct threat..Without groups like Radio Fresh to provide alternative messages, another generation will take up arms.”

In 2014 he was shot twice in the chest by Islamic State gunmen, breaking six bones and piercing a lung. Within weeks, he returned to activism: “The message is that when we started our revolution, we broke the barrier of fear. We’re not afraid. We just want to reach our aims: dignity and freedom. And we will get them.”

The offices in Kafranbel were targeted by regime bombardment and by Islamist extremists, who abducted and tortured Fares several times.

But among the attacks, bombings, and killings by the Assad regime and by the jihadists of Hay’at Tahrir al-Sham, Farespersisted:

Recent history has shown us again and again that enduring peace depends on the existence of a vibrant civil society and free political discourse, a marketplace of ideas where new voices can challenge dictatorship and terrorism….

We haven’t given up. We’re still broadcasting our independent coverage of the Syrian revolution, countering terrorism and advocating tolerance.

Friends begged Fares to leave Kafranbel but they recalled his answer, “What can they do? Kill me? Let them kill me. I’m not going to leave and leave them the country.”

His great heart has been stopped, his great spirit will not die#RaedFares sought peace & justice & so was an enemy both of bloody tyrant Assad & extremists desiring tyranny

A Syrian patriot. Our deep condolences to his family, colleagues & to all Syrians on their great loss pic.twitter.com/2BMofezEcZ

sketch of Raed Fares I made the one time I met him in 2014. I remember his grin, his sarcastic wit (one of his many methods of defiance). Activists are reporting that he was assasinated by Hayat Tahrir al-Sham- fundamentalist thugs he had resisted for years pic.twitter.com/X1Pp2IUahE

The day this photo was taken, in Jan. 2014, Raed Fares told me “Our dream remains a democratic + civil state w freedom for all Syrians.”
-I thought this might be naive, but since then, jihadis have come + gone, mourned by few. Raed’s struggle endures…https://t.co/VugoBudU73 pic.twitter.com/83sh8TYoDV