TrumpWatch, Day 639: Discontent and Resignations in Justice Department Over Sessions 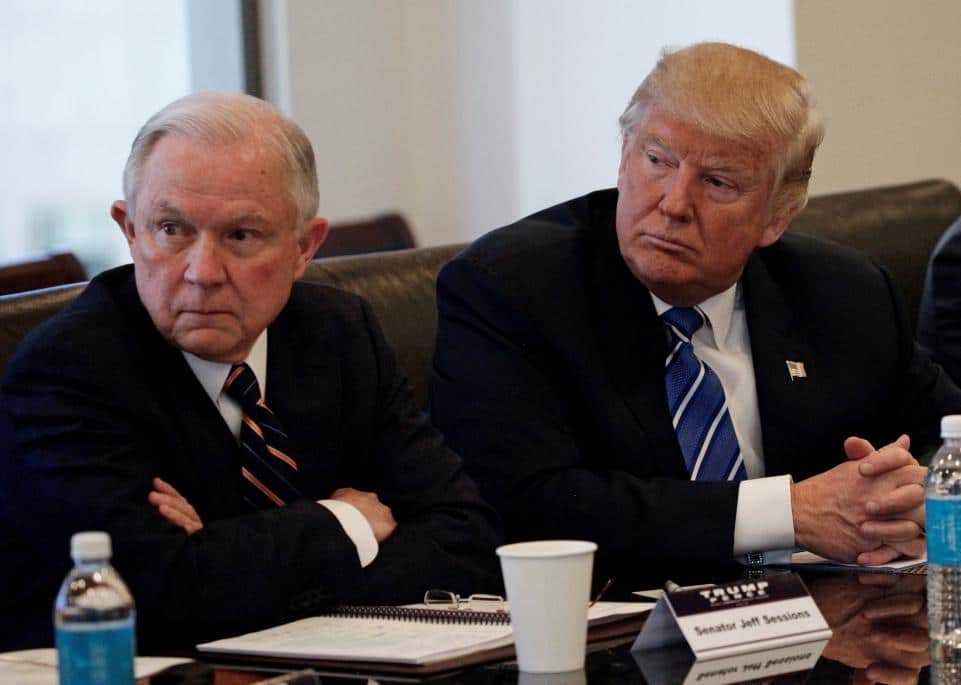 Current and former Justice Department officials have spoken of an agency riven by discontent over the ideological approach of Attorney General Jeff Sessions.

The 24 officials portray Sessions — the only US Senator to support Donald Trump throughout his 2016 Presidential campaign — as driven to replace the civil rights policies of the Obama era with an agenda of hardline conservative views on immigration, rights, and social issues. They say he has ignored dissent, risking losses in court and prompting high-level departures.

They noted that Trump has added to the disruption with his repeated attacks on Sessions, on Deputy Attorney General Rod Rosenstein, and on the Justice Department, notably in an effort to halt the Trump-Russia inquiry. Trump has also assailed current employees, such as Bruce Ohr, a specialist in investigation of Russian oligarchs and organized crime, after his dismissal of FBI Director James Comey and pressure for the resignation of Deputy Director Andrew McCabe.

“Since I’ve been a lawyer, going back to the late 1970s, I can’t recall a time when morale has been as low as I have heard from some former colleagues,” said Robert Litt, a Justice Department official during the Clinton Administration.

Four current Justice Department staff spoke of Sessions and other Trump appointees ignoring the legal advice of career lawyers in areas such as sanctuary laws protecting undocumented immigrants and provisions of the Affordable Care Act (ObamaCare). The Attorney General demanded that the legal specialists change their conclusions, forcing the resignation of high-level officials and the withdrawal of others from cases.

When they removed protections last year for transgender people under the Civil Rights Act, department leaders failed to consult Diana Flynn, the head of the civil rights appellate division who led the effort to add the protections in 2014, and her staff. Flynn has left the Justice Department for Lambda Legal, a lesbian, gay, bisexual, and transgender legal aid organization.

Department spokeswoman Sarah Isgur Flores maintained, “We know of no department employee who is opposed to policies that uphold the rule of law and protect the American people — which are precisely the policies that this department has implemented and embraced.”

She proclaimed that Sessions’ approach had been “vital to reducing violent crime”, fighting the opioid drg epidemic, and securing borders with the Administration’s “zero tolerance” policy.

In a sign that the Trump Administration is maintaining ties with the Saudi monarchy despite the killing of journalist Jamal Khashoggi, Treasury Secretary Steven Mnuchin is travelling to Riyadh this week.

Mnuchin said on Sunday in Jerusalem that the economic and strategic relationship between the US and Saudi Arabia is too important to be cast aside.

Facing the evidence that Saudi personnnel connected to the monarchy were responsible for Khashoggi’s murder — either in a planned operation or an interrogation/abduction gone wrong — Donald Trump has maintained a priority on a $110 billion arms sale to Saudi Arabia, announced during his visit to Riyadh in May 2017.

Will Khashoggi’s Disappearance Make Any Difference In US-Saudi Relations?
TrumpWatch, Day 637: Trump Wobbles on Support of Saudis Over Khashoggi

US intelligence agencies have said — in line with Turkye, which has produced the evidence blaming the Saudis —that they believe Saudi officials killed Khashoggi, but Trump’s son-in-law Jared Kushner has reportedly said the affair will blow over and the US must continue support of Crown Prince Mohammad bin Salman.

The Trump Administration had bowed to international pressure by cancelling Mnuchin’s involvement in the Future Investment Initiative that begins in Riyadh on Tuesday, following withdrawal by international business, finance, and media leaders.

But the Treasury Secretary said on Sunday:

We have an important relationship with Saudi, focused on combating terrorist financing and focused on our common interests of stopping Iran’s spread of both terrorism and other issues. I am going to go there and meet with my counterparts and continue to focus on what’s in the Treasury’s domain, as it relates to this issue.

Mnuchin said it was important to wait for more facts to emerge before determining if Saudi Arabia should face sanctions under the Global Magnitsky Act. He described what happened to Khashoggi as a “terrible situation” but said that he does not intend to chastise Saudi officials about rights abuses.