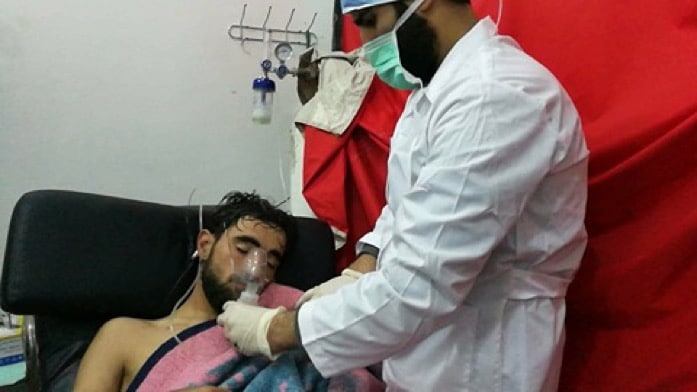 The UN has found the Assad regime responsible for three more chemical attacks in Syria this year.

UN investigators said on Wednesday that the attacks had taken place on East Ghouta near Damascus, as pro-Assad forces pursued an offensive to reoccupy the area, and on Idlib Province in northwest Syria.

The UN has now attributed responsibility to the Assad regime for 33 chemical attacks since the regime’s August 2013 sarin assault on East and West Ghouta, killing more than 1,400 people. The Islamic State has been blamed for six others.

The UN team formally found the regime attacked Douma in East Ghouta on January 22 and February 1:

The Commission concludes that, on these two occasions, government forces and or affiliated militias committed the war crimes of using prohibited weapons and launching indiscriminate attacks in civilian-populated areas in eastern Ghouta.

The investigators said the chlorine was delivered by a surface-to-surface, improvised munition “built around industrially-produced Iranian artillery rockets known to have been supplied to forces commanded by the government”.

On April 7, regime helicopters carried out a double chlorine attack on Douma, killing about 50 people and wounding hundreds. The next day, rebels surrendered in the last town still held by the opposition in East Ghouta.

The Organization for the Prohibition of Chemical Weapons, initially hindered by the Assad regime and Russia from investigating the attacks, is still completing a formal report.

The Idlib chlorine attack cited by the UN team was on the town of Saraqeb on February 4:

Government helicopters dropped at least two barrels carrying chlorine payloads….Documentary and material evidence analyzed by the Commission confirmed the presence of helicopters in the area and the use of two yellow gas cylinders.