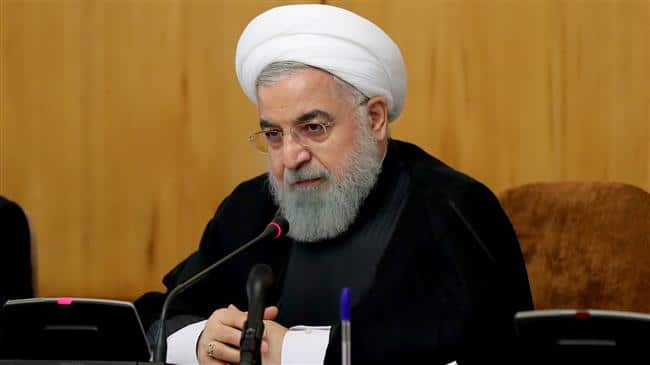 Setting aside the details of Iran’s economic crisis, President Hassan Rouhani spoke on Wednesday about “a clear war against the aggressors of history”.

After a Cabinet meeting, Rouhani tried to maneuver not only against difficulties over production, employment, investment, and currency, but also against the Supreme Leader’s injunction that there should be no pessimism.

Calling for loyalty and unity, the President said Iran will prevail not onlyn because of its strengths but because the US going through its worst period in history:

Today, there are few researchers, intellectuals, and experts in the US that share the same opinions as those in the White House, and some of them even explicitly refer to [US leaders] as idiots. This has rarely happened….

Today, Washington’s allies are not standing by it politically, and even its traditional partners are proudly distancing themselves from the US.

Rouhani asserted that only a few “ill-famed” countries support Washington: “The US is today in its worst situation globally, and even international organizations such as UNESCO, the UN, the International Atomic Energy Agency, and the International Criminal Court do not approve of American policies.”

In his only specific remark about the economic crisis, Rouhani played down the 70% devaluation in the Iranian currency since January, including a sharp drop over the past six weeks: “Import of goods and services that rely on foreign currency are very few, based on some calculations about 5% and based on some others — who don’t take into account the value and the purchasing power in their models — about 10%”.

The President did not mention the Government’s consideration of rationing of some essential items, amid a resurgence in inflation because of the rial’s devaluation. Instead, he issued the general invocation:

Of course, people will have problems in this war, because it’s not possible for a war to not have any casualty, but this is a war that we will certainly win and we will defeat the enemies.

Rouhani — who has been under pressure from hardliners, with Parliament’s dismissal of the Labor and Economy Ministers and even some talk of removing the President — called for unity behind the Government, “Today, we are at a great test. All media and authorities and those who have power should help the great Iranian nation.”

He concluded with allegiance to the Supreme Leader’s command from last week against those “spreading the virus of pessimism in the country through their speeches, tribunes, and media”.

Esfandiar Rahim-Mashaei, the right-hand man of former President Mahmoud Ahmadinejad, has been given a 6 1/2-year prison sentence.

Tehran Justice Department chief Gholam-Hossein Esmaili said Rahim-Mashaei was given five years in prison for threatening Iran’s internal and external security, one year for propaganda against the Islamic Republic, and six months for insulting people.

Esmaili said but Rahim-Mashaei can appeal, but added that a maximum of five years of the sentence could go into effect and that he is also involved in other court cases under investigation.

A senior aide to Ahmadinejad, Ali-Akbar Javanfekr, has also been sentenced to four years in prison on the same charge, according to Revolutionary Guards outlet Fars.

Ahmadinejad, who is still on the Expediency Council, has regularly tried to make a political comeback since he left office in 2013 but has been checked by factions within the regime. Both he and Rahim-Mashaei were blocked in 2017 by the Guardian Council from candidacy in the Presidential election.