The Death Blow Is Coming for Syrian Democracy

UPDATE 1600 GMT: A summit between the leaders of Russia, Turkey, and Iran appears to have divided over the issue of a pro-Assad offensive on Idlib Province.

Meeting in Tehran, Russia’s Vladimir Putin appear to have held out against any mention of a ceasefire, or even commitment to the de-escalation zone declared last year, in the final statement. But the objections of Turkey’s Recep Tayyip Erdoğan checked allusions to military operations — the statement instead echoes Ankara’s line of “separation between the…terrorist groups and the armed opposition groups that had joined or would join the ceasefire regime” and refers to “conviction that there could be no military solution to the Syrian conflict”.

Putin had tried to establish the pretext for an assault with his framing of “terrorists” and Russian disinformation of preparations for a “false flag” chemical attack:

The remaining groups of extremists are currently concentrated in the de-escalation zone in the province of Idlib. Terrorists are making attempts to disrupt the ceasefire, moreover, they are carrying out and preparing various kinds of provocations, including the use of chemical weapons.

From a Turkish journalist:

This summit is a mess.

Clearly there is no deal. Erdoğan is arguing with Rouhani and Putin live on television.

Erdoğan mentions about civilians, then both responded by saying civilians are used as human shield by terror groups in Idlib, or a pretext to protect terrorists

And an Iranian journalist:

#Turkish president #Erdogan tried to urge #Iran & #Russia presidents to back ceasefire in #Idlib. #Rouhani & #Putin agreed provided that "terrorists" "lay down their arms". Now the ball is in #Turkey's court to convince militants to lay down arms.#Syria

UPDATE 1245 GMT: For the second Friday in a row, there have been widespread demonstrations across Idlib Province against an imminent pro-Assad offensive. 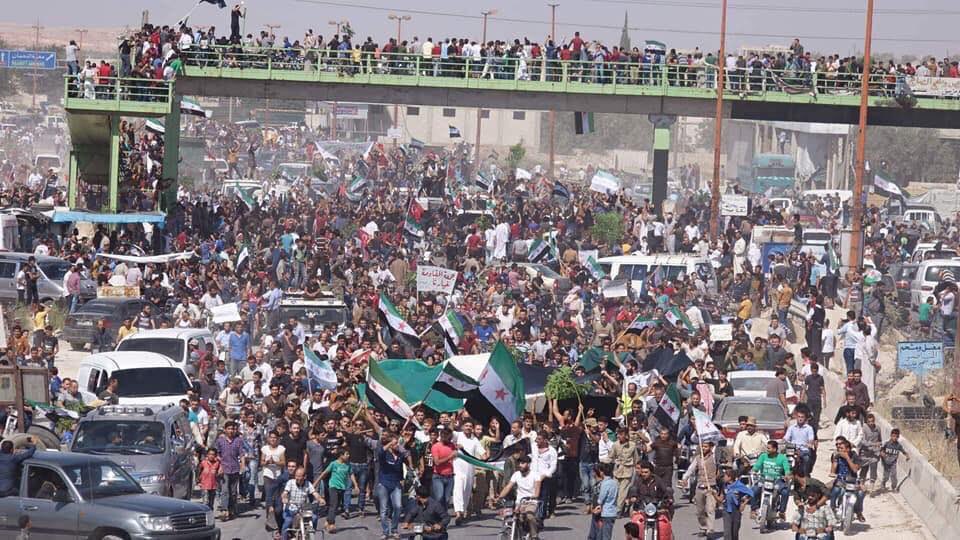 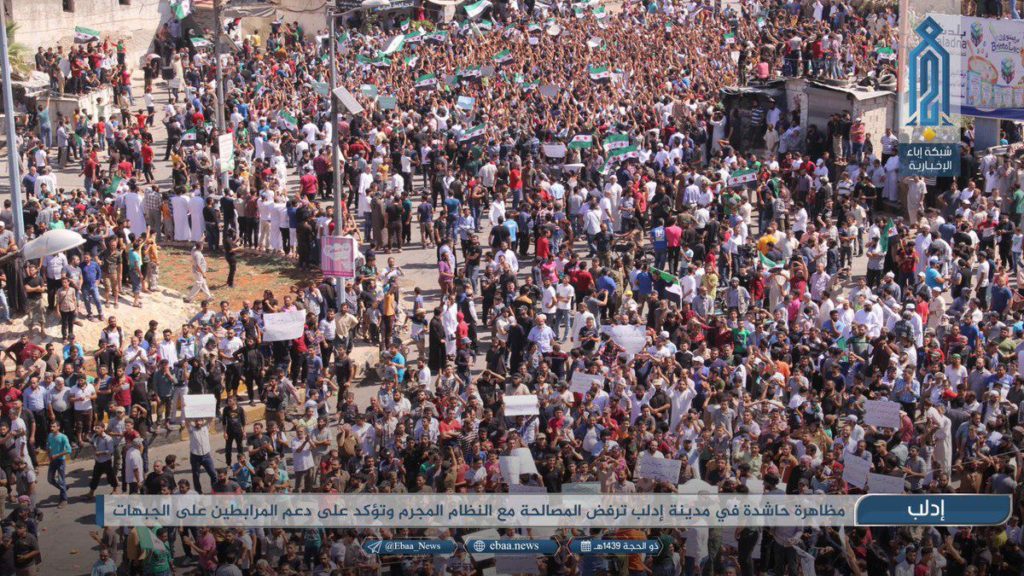 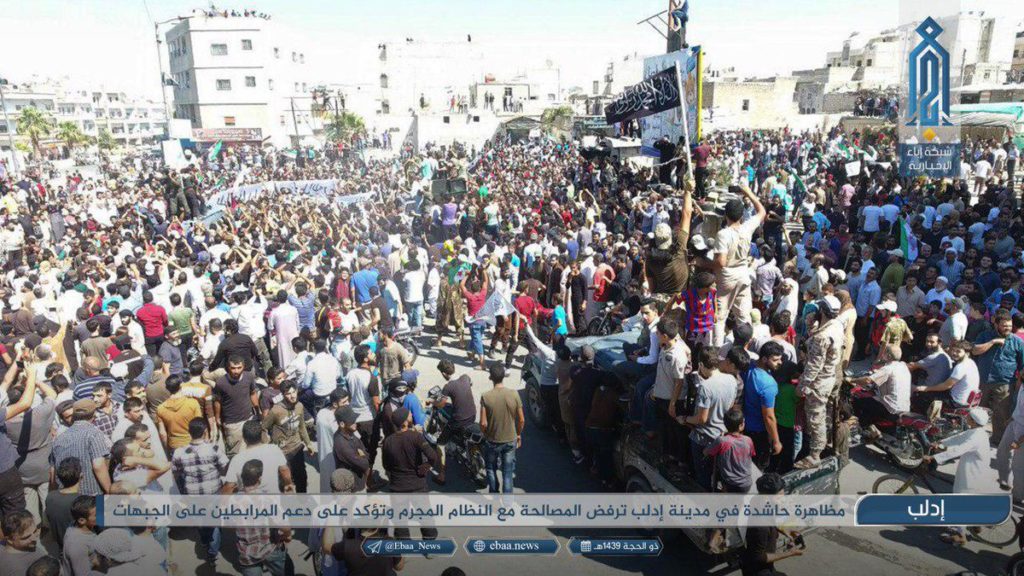 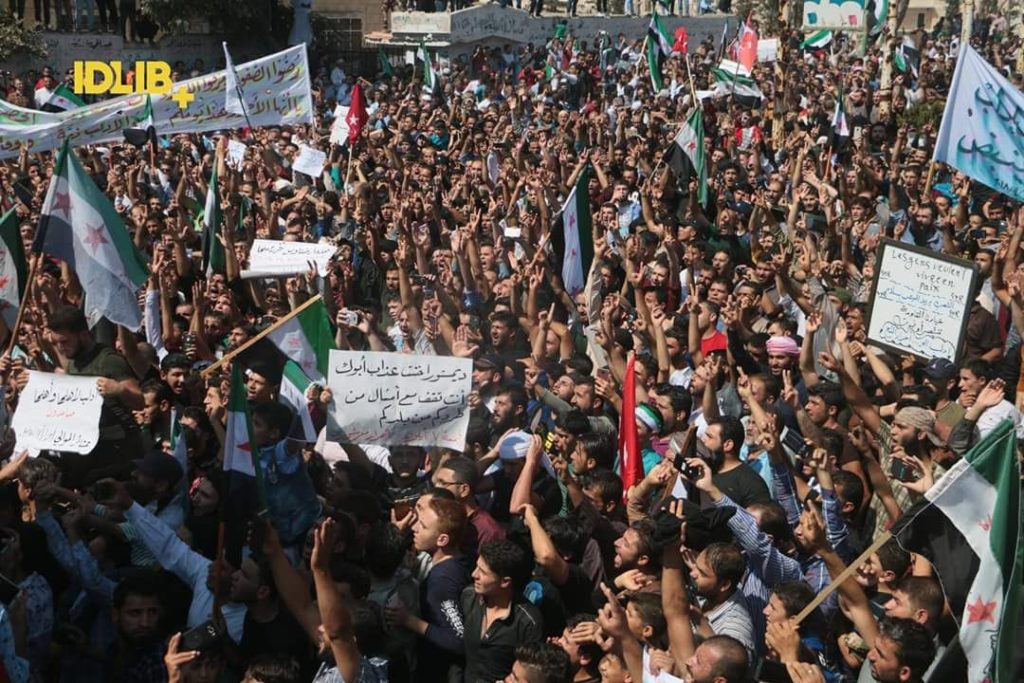 Protesters with a donkey “Bashar al-Assad”: 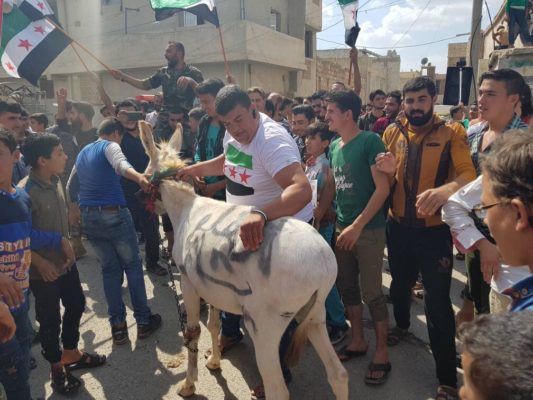 ORIGINAL ENTRY: Russia has warned the US military twice in the last week that its forces and pro-Assad units are prepared to attack an area where dozens of American troops are located, according to “several US defense officials”.

Russian officials have been pressed for a withdrawal of US personnel from Syria. However, while Donald Trump has called for the departure, the Pentagon and Central Command have stood firm against any end to US support for the Kurdish-led Syrian Democratic Forces.

The US has backed the SDF since it was created in autumn 2015 to push back the Islamic State in northern and eastern Syria. The success of that mission has led to a de facto Kurdish autonomous region — reports on Thursday said that the SDF is prepared to make this formal with the confirmation of a ruling administration.

The Pentagon and other US officials have also indicated that they see the presence of US special forces and advisors as a buffer against the expansion of Iranian involvement, putting up a land barrier to unimpeded movement from the Islamic Republic via Iraq to Syria.

The Assad regime has vowed to regain control of “every inch” of Syria, including the Kurdish region.

Threats to a Coalition Base?

The American officials said that they are concerned about a pro-Assad attack, with Russian involvement, on the US-led coalition base at al-Tanf in eastern Syria, near the Iraqi and Jordanian borders.

Since the SDF advance against ISIS, the Americans have maintained a 55-km (34-mile) exclusion zone around the base. The area has faced challenge because of a pro-Assad push against rebels through the Badia desert, bringing them to the zone’s perimeter. On at least three occasions, US warplanes and coalition ground units attacked and repelled pro-Assad forces — including Hezbollah and Iranian-led foreign militia — trying to move inside the area.

“We have absolutely advised [the Russians] to stay out of At Tanf,” one US official said. “We are postured to respond.”

The American sources did not say if Moscow conveyed its warning directly to Washington. They said that Defense Secretary James Mattis and Gen. Joseph Dunford, chairman of the Joint Chiefs of Staff, are aware of the intelligence.

The United States does not seek to fight the government of Syria or any groups that may be providing it support. However, if attacked, the United States will not hesitate to use necessary and proportionate force to defend US, coalition or partner forces.

In the most serious clash between pro-Assad forces and the SDF, about 300 Assad regime and allied fighters were killed by US airstrikes when they tried to advance on a gas complex in Deir ez Zor Province in eastern Syria. Some Russian personnel were caught up in the fighting and slain — reports vary widely on how many.

Military Triumphs Over Trump: US to Remain in Syria

The US military has vanquished Donald Trump’s effort for the withdrawal of US forces from Syria.

Trump said in April that he wanted to “get out” of the country. He succeeded in freezing US funds for stabilization and recovery, but the Pentagon checked his attempt to remove US personnel and put hundreds more into northern and eastern Syria, supporting the pro-Kurdish Syrian Democratic Forces.

American officials said Thursday that Trump was now committed to the ongoing presence, citing doubts about whether Russia is able and willing to help remove Iranian personnel from Syria.

“The new policy is we’re no longer pulling out by the end of the year,” said the US envoy to Syria, James Jeffrey. He said the forces remain to ensure an Iranian departure and the “enduring defeat” of the Islamic State.

“That means we are not in a hurry. I am confident the president is on board with this,” Jeffery asserted.

Summarizing the American policy on the regime’s future, Jeffery said it is not that “Assad must go”: “Assad has no future, but it’s not our job to get rid of him.”

But he generally spoke of an eventual political transition, as he found it hard to think of Assad as a leader who could “meet the requirements of not just us but the international community” and someone who “doesn’t threaten his neighbors”, abuse his own citizens, “allow chemical weapons, or provide a platform for Iran”.

UN Advisor on Genocide: Concern Over 1 Million Children in Idlib

The UN Special Advisor on the Prevention of Genocide, Adama Dieng, has reiterated the organization’s “grave concern” over a pro-Assad offensive on Idlib Province in northwest Syria, citing the threat to more than 1 million children.

The children are among an estimated 2.9 million people, half of them displaced from other areas in Syria, in the province.

Russia and Iran been pressing for the offensive, breaking the “de-escalation zone” they proclaimed last year with Turkey, by using the pretext that the “festering abscess” of “terrorists” must be removed. Ankara, which has been in northwest Syria alongside rebels since August 2016, has held out so far against the assault.

The Presidents of the three countries meet today in Tehran to discuss the issue.

All parties to the Syrian conflict have an obligation to protect civilians. International law is clear. All military operations, including those that are aimed at countering terrorism, must respect basic principles of international human rights and humanitarian law. There can be no justification for the commission of international crimes.

Time and again we have witnessed the horrors faced by the civilian population in Syria – in Aleppo, in Eastern Ghouta, in Raqqah, and most recently in Dara’a and Qunaitra. Given the high population of civilians in Idlib, the impact of a military offensive there may be the worst we have seen in Syria yet.

The Special Advisor called on the international community “to hold the Government of Syria accountable for the protection of populations in Idlib and to take the necessary action to prevent another man-made tragedy in Syria”.

US: “Lots of Evidence” of Assad Regime Preparations for Idlib Chemical Attacks

The US special envoy for Syria, James Jeffrey, has added to warnings of Assad regime preparations for chemical attacks on Idlib Province, citing American intelligence:

I am very sure that we have very, very good grounds to be making these warnings.

Any offensive is to us objectionable as a reckless escalation. There is lots of evidence that chemical weapons are being prepared.

The US Government has issued warnings this week, including through UN Ambassador Nikki Haley, against any use of chemical weapons.

The Assad regime is suspected of using chlorine and sarin on up to 200 occasions during Syria’s conflict, including the nerve agent attacks near Damascus that killed at least 1,400 people in August 2013 and the August 2017 sarin release on Khan Sheikhoun in Idlib that killed about 90 people and wounded hundreds.

The Organization for the Prohibition of Chemical Weapons formally found the Assad regime culpable for several chlorine attacks and the Khan Sheikhoun assault, before Russia blocked any further attribution of blame.

The OPCW is currently investigating the suspected Assad regime chemical attacks on Douma in East Ghouta, near Damascus, in April 2018.

The US hit an Assad regime airbase after the use of sarin on Khan Sheikhoun and was joined by Britain and France in missile strikes on three regime complexes a week after the Douma attacks.

Echoing Turkish concerns, Jeffrey said any pro-Assad offensive would displace hundreds of thousands of people, putting more pressure on the Syria-Turkey border. He said the situation is “very dangerous” and supported Ankara’s line — so far — against an assault by Russia, the Assad regime, and their foreign allies.

“I think the last chapter of the Idlib story has not been written. The Turks are trying to find a way out. The Turks have shown a great deal of resistance to an attack,” the envoy said.