The Death Blow Is Coming for Syrian Democracy 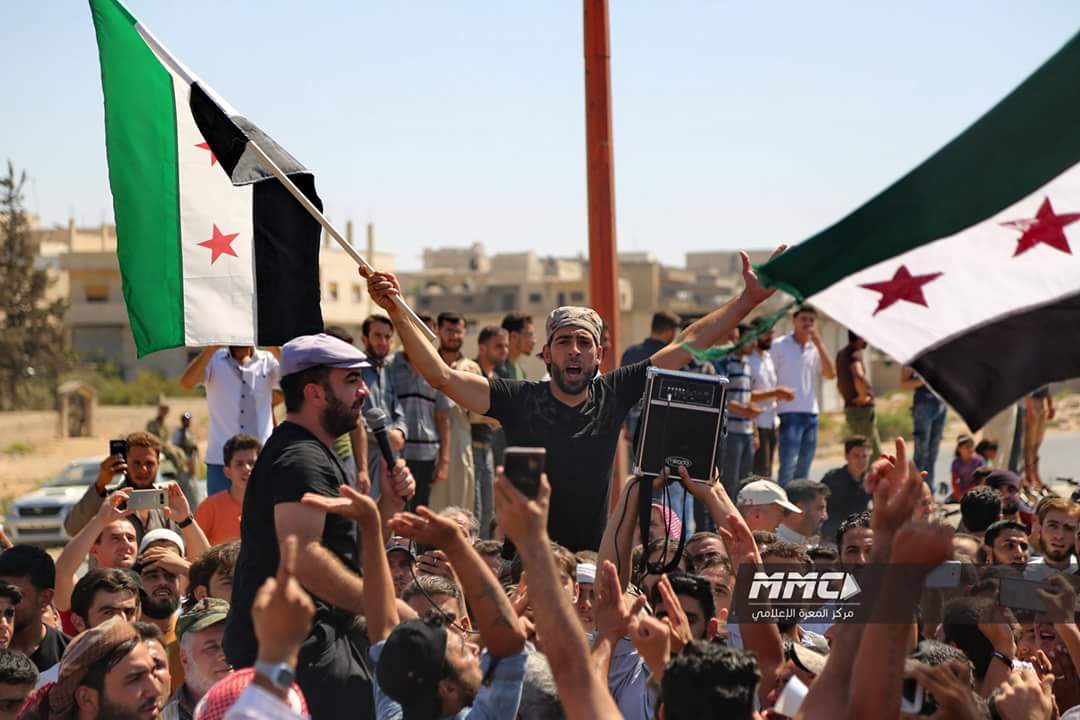 “The resumption of the Syrian regime’s control in Idlib will not lead to peace, and still less to stability. It will eradicate the democratic alternative to tyranny.”

The Syrian regime is determined to reconquer all of the territory it has lost. Aided by Russian bombers and Iranian troops, and emboldened by its success in terrorizing the populations of Ghouta and Daraa into submission, President Bashar al-Assad’s government is now preparing to attack Idlib, the last remaining province outside of his control. Idlib is home to some three million people, about half of them displaced, or forcibly evacuated, to the province from elsewhere. Many are crowded into unsanitary camps or sleeping in the open.

In recent days, regime troops have massed on Idlib’s border and leaflets have been dropped on residential areas calling on Syrians to accept “reconciliation” or face the consequences. Meanwhile, Russia has been sending reinforcements to its naval base in Tartus.

The Syrian troika — Russia, Iran, and Turkey — designated Idlib a “de-escalation zone” last year. But what happens there next could potentially undermine the so-far mutually beneficial agreement among the three countries.

De-escalation in Idlib genuinely serves Turkey’s interests: It keeps both the Syrian Kurds and the Assad regime away from the border, it preserves Turkey’s relevance to a long-term settlement, and it houses Syrians who would otherwise try to join the 3.5 million refugees already in Turkey. Turkey has shown its commitment by setting up observation posts around the province and by establishing the National Liberation Front, an amalgam of Free Army and Islamist militias that follow Turkish orders. Russia and Iran, on the other hand, have always seen the de-escalation zones as tactical and temporary. Just as Daraa and Ghouta were abandoned, so (they hope) Idlib will be returned to Assad’s control.

The Syrian regime and its allies justify their coming attack on Idlib by saying that they want to root out jihadists. Hay’at Tahrir al-Sham, which is led by the Qaeda-linked Nusra Front, dominates some 60 percent of the province and has an estimated 10,000 fighters, according to the United Nations special envoy to Syria, Staffan de Mistura. The repeated descriptions of Idlib as a “terrorist hotbed” support the regime’s narrative that all opposition to its rule consists of terrorist groups; it also absolves the international community of any responsibility to protect civilians.

But this characterization of the province is inaccurate. The people of Idlib have been at the forefront of the struggle against Hay’at Tahrir Al Sham. Since Idlib’s liberation from the regime — partially in 2012 and then fully in 2015 — many of its citizens worked to build a free society that reflected the values of the revolution. According to researchers, more than 150 local councils have been established to administer basic services in the province; many held the first free elections in decades. Long-repressed civil society witnessed a rebirth. Independent news media, like the popular Radio Fresh, were set up to challenge the regime’s monopoly on information. Women’s centers grew, empowering women to participate in politics and the economy.

HTS has threatened these hard-won achievements. The group has tried to embed itself within the local population. Since the fall of Aleppo in 2016, it has intensified its attempts to impose its ideology by taking over local institutions and establishing Shariah courts. It’s been ruthless with its perceived opponents. In December, it arrested four prominent activists displaced to Idlib from Madaya, ostensibly on charges of “media work against HTS”. Raed Fares, one of the founders of Radio Fresh, survived an assassination attempt, as did Ghalya Rahal, who established the Mazaya Organization, which runs eight women’s centers. Fighting between H.T.S. and other rebel groups has left many civilians dead, and a spate of assassinations and kidnappings for ransom has left the local population fearful and angry.

Syrians did not risk their lives and rise up against Mr. Assad’s dictatorship to replace it with another. Many local councils issued statements rejecting HTS’s authority in local governance or declaring their neutrality in fighting between rebel groups. Hundreds of local activists coordinated opposition to HTS’s control and called for demilitarization of their communities through media campaigns and public demonstrations. Courageously, they replaced the black jihadist flag with the flag of the revolution. In April, medical workers held protests against infighting and kidnapping. Women organized against HTS’s discriminatory edicts, such as the imposition of strict dress codes and requiring widows to live with a close male relative.

The regime’s reconquest of Ghouta, Daraa and other areas has been accompanied by gross human rights violations. There have been waves of arrests of perceived dissidents. Men have been forcibly conscripted into the regime’s army. Many have been made to sign documents that they would not engage in protests or anti-regime activity and have been pressured to submit information about rebel groups. Journalists, humanitarian workers and opposition activists live in fear of being targeted.

The reconquest of Idlib would doubtless lead to the same consequences. The civil activism that operates in the light would be crushed, and promising democratic experiments would be eradicated, leaving extremists to flourish in the dark.

While a strong civil society is one of the best defenders against the spread of extremism, bombing campaigns and state-led terror risk increasing the popular appeal of jihadist groups. Yet today, key donors to Syrian civil society, such as the United States and Britain, are withdrawing funding for Syrian organizations in Idlib for fear it could fall into terrorist hands. Given the enormity of the humanitarian crisis that will most likely unfold, the withdrawal of desperately needed assistance is likely to further compound the suffering of civilians.

Worst of all, there is a growing international consensus that the regime is the best solution for the devastation it has wrought. The international community is now shifting its focus toward reconstruction, rehabilitating the regime through rewarding those responsible for the country’s devastation, and pressuring refugees to return to a country where their safety is far from assured.

The people of Idlib are aware that they will probably be abandoned to a fate similar to their countrymen in Daraa and Ghouta. Anger at their betrayal by the supposed democratic powers, already deeply rooted, is growing. The residents understand that those who favor “stability” at any price perceive their continued resistance as an inconvenience. But the resumption of the regime’s control in Idlib will not lead to peace, and still less to stability. It will eradicate the democratic alternative to tyranny, leaving the jihadists — who thrive on violence, oppression and foreign occupation — as the last men standing, to constitute a long-term threat to the region and the world.