TrumpWatch, Day 581: Attorney General Sessions Pushes Back v. Trump — Will He Be Fired? 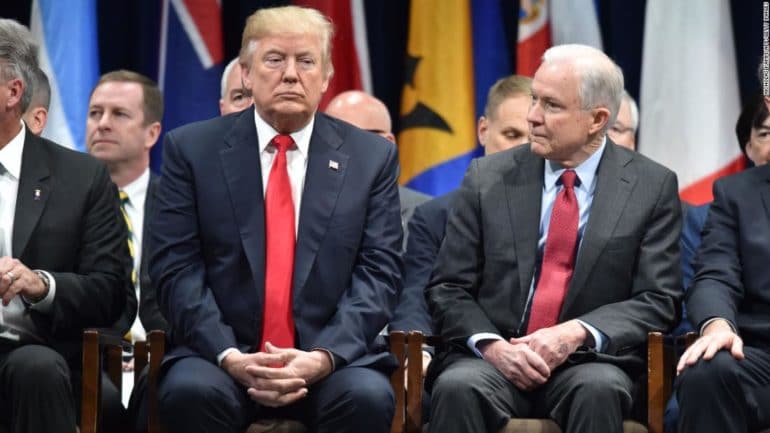 Jeff Sessions pushes back against Donald Trump’s pressure on him and the Justice Department over the Trump-Russia investigation, as Trump and his allies renew threats to fire the Attorney General.

Trump has repeatedly insulted and warned Sessions, angered that the Attorney General will not reverse his March 2017 recusal from oversight of the Russia inquiry.

The recusal was forced by Sessions’ contacts in 2016, as a senior Trump campaign advisor, with Russian Ambassador Sergey Kislyak. Trump wants the Attorney General’s involvement to pressure and possibly fire Special Counsel Robert Mueller, who is leading the investigation.

Trump stepped up the insults and the pressure in the past week, amid the courtroom testimony of his former lawyer Michael Cohen, implicating Trump in criminal activity.

In an interview with his ally Fox TV, broadcast on Thursday morning, Trump said:

[Sessions] took the job and then he said, “I’m going to recuse myself.” I said, “What kind of a man is this?”…

Sessions finally hit back, later in the day, “While I am Attorney General, the actions of the Department of Justice will not be improperly influenced by political considerations.”

Republican Senators split over the quarrel. The head of the Judiciary Committee, Charles Grassley, said, “I’ve got time for hearings this fall” for a new Attorney General.

Lindsay Graham of South Carolina, reversing his previous position that there would be “hell to pay” if Sessions was dismissed, said it was obvious that the Attorney General has lost Trump’s confidence and that he might not object to his replacement after November’s mid-term Congressional elections.

But the Number 2 Republican in the Senate, John Cornyn of Texas, warned, “We don’t have time, nor is there a likely candidate who could get confirmed [to replace Sessions], in my view, under the current circumstances.” Susan Collins of Maine, a key vote on issues such as the confirmation of Supreme Court nominee Brett Kavanaugh, said Sessions’ firing “certainly would not be a wise move”.

A spokesman for Senate Majority Leader Mitch McConnell said he was not aware of any change in support for Mr. Sessions.

David Pecker, the CEO of American Media Inc., has been given immunity to testify about Trump and his former lawyer Michael Cohen.

Pecker is a central figure in one of the two “hush money” cases — payoffs, just before the 2016 Presidential vote, to women who claimed sexual encounters with Trump — to which Cohen pleaded guilty on Tuesday.

AMI, which publishes the National Enquirer tabloid, was given $150,000 by Cohen to effectively silence Karen McDougal, who said she had a 10-month affair with Trump in 2006-2007. AMI bought the rights to McDougal’s account and then buried the story, silencing her through an exclusive agreement preventing the former Playboy model from speaking out elsewhere.

Pecker is a decades-long friend of Trump’s.

In his interview with Fox TV, broadcast Thursday, Trump continued to insist that he only knew about payments “later on”, after the election — despite an audio tape of his conversation with Cohen in September 2016 discussing the payment to McDougal.