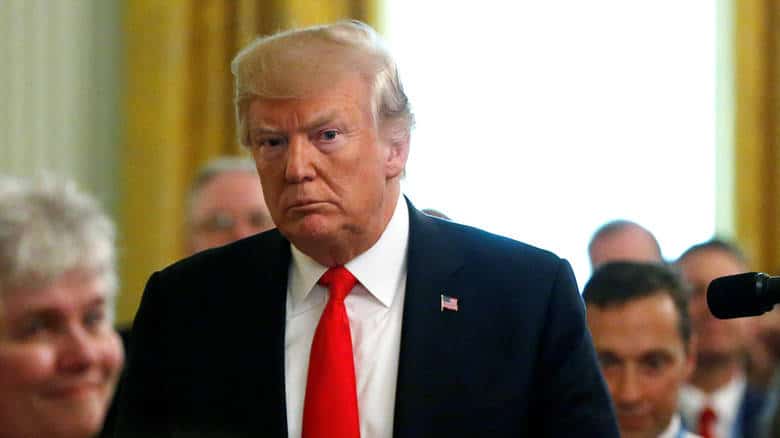 Shaken by the guilty plea of his former lawyer Michael Cohen and conviction of ex-campaign manager Paul Manafort, Donald Trump fumes throughout Wednesday before concluding at 1:10 am:

On Tuesday afternoon, Cohen rocked the Trump camp with a statement under oath after he pleaded guilty to eight financial charges. Cohen said that, on two charges related to campaign finance violations, Trump ordered the pay-offs to two women alleging sexual excounters, silencing them just the 2016 Presidential vote.

Cohen’s statement, reinforced by comments from his lawyer Lanny Davis, was the first claim in a formal hearing of Trump’s criminal activity.

Meanwhile, Manafort was being convicted on eight counts of fraud. While the charges were directly related to the advisor’s work before he joined the Trump campaign, notably over Manafort’s consultancy for pro-Russian groups in Ukraine, the conviction opened up a connection with his handling of finances in 2016 for Trump.

Unlike Cohen, Manafort has refused to cooperate with prosecutors, but the prospect of a lengthy prison term — assuming Trump does not intervene with a pardon — could be an incentive for him to begin speaking with Mueller’s team.

Trump used Twitter both to condemn Cohen — “If anyone is looking for a good lawyer, I would strongly suggest that you don’t retain the services of Michael Cohen!” — and to bolster Manafort against testifying in the Russia inquiry.

I feel very badly for Paul Manafort and his wonderful family. “Justice” took a 12 year old tax case, among other things, applied tremendous pressure on him and, unlike Michael Cohen, he refused to “break” – make up stories in order to get a “deal.” Such respect for a brave man!

Trump downplayed both developments, asserting — wrongly — that Cohen had pleaded guilty to “two counts of campaign finance violations that are not a crime”, and that the mistrial on 10 of 18 counts against Manafort was proof of “A Witch Hunt!”.

According to one of the Manafort jurors, a single member of the panel held out against conviction on the other 10 charges.

But Trump pressed on with another diversion, asserting, “President Obama had a big campaign finance violation and it was easily settled!” — a point circulated by his defenders across media on Wednesday.

The Obama campaign did pay a $350,000 fine over the lack of timely finance reports over $750 million in contributions in 2008. However — unlike in the criminal case involving Cohen — the civil ruling had no finding of a deliberate attempt to violate campaign finance law, and analysts said the penalty was not extraordinary in light of previous US campaigns and the size of the contributions to Obama’s effort.

Trump’s combination of anger and defiance did not lift the mood at the White House, where aides tried to grapple with the scale of the “criminal activity” claims.

Press Secretary Sarah Huckabee Sanders repeated over and over in her question-and-answer session, “The president has done nothing wrong. There are no charges against him. There is no collusion.”

She insisted, “Just because Michael Cohen made a plea deal doesn’t mean that implicates the president on anything.”

In an audio recording released last month, Trump discussed with Cohen arrangements for a $130,000 payment to former Playboy model Karen McDougal, who says she had a 10-month affair with Trump in 2006-2007, just over a year after Trump married Melania Knaus and a few months after their son Barron was born.

But Trump continued to insist, in an interview with Fox TV, that he only learned of the payments last year, after they were revealed by the media. He tried to claim that the pay-outs did not violate Federal election campaign law because they were from personal fund.

“My first question when I heard about it was, ‘Did they come out of the campaign?’” Trump said. “Because that could be a little dicey.”

But officials said that, behind the public defiance, Trump was subdued in conversations in the White House. “Several people” summarized his line, “We started with collusion. How did we end up here?”