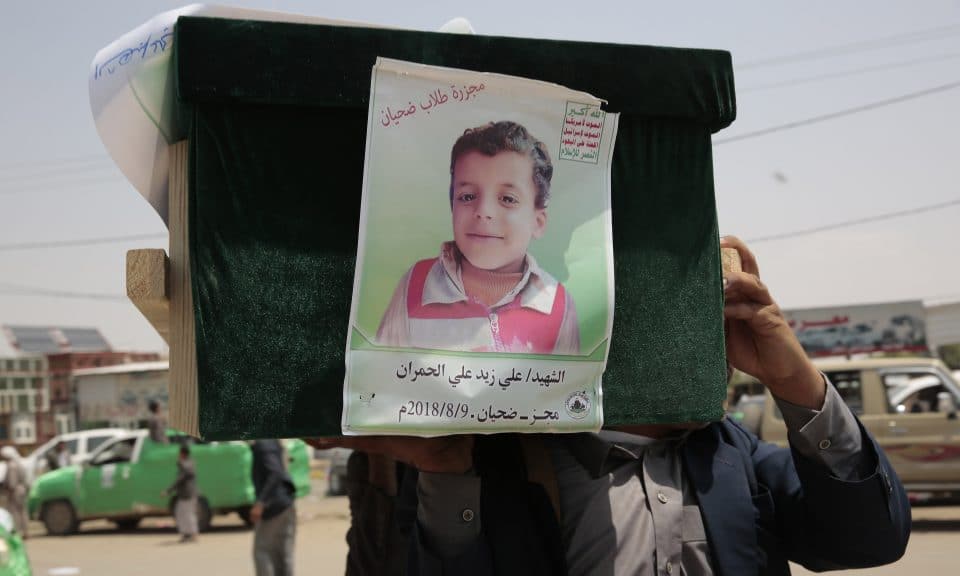 State Department official tried to minimize civilian casualties in Yemen. Last year, he was dismissed by the Trump Administration.

Samuel Oakford writes for The Atlantic about Larry Lewis, who tried for two years in vain to limit the killings from Saudi-led airstrikes. He says now:

I think largely I am frustrated with the US….The world wonders if the US cares about civilians in Yemen. I wonder if we care enough to act.

On August 9, Saudi jets bombed a bus packed with schoolchildren in northern Yemen. The attack, which occurred during a field trip to mark the end of summer classes, killed at least 40 students aged 6 to 11, and left dozens more wounded, as footage from the scene later showed.

See “They Were So Excited”: Yemen’s Schoolboys Killed by Saudi Airstrike

After more than three years of war against the Houthi rebels and thousands of casualties, the attack was one of the conflict’s most senseless and tragic. Over that time, the Saudi-led coalition, which consists primarily of Saudi and Emirati forces, has had the chance to adopt targeting practices that could help it avoid harming civilians. The bus strike, and Riyadh’s response, do not suggest this is a high priority.

Since the campaign against the Houthis began in March 2015, the United States has provided intelligence and logistical support to the Riyadh-based coalition, in addition to billions in arms sales. U.S. tankers have also off-loaded millions of pounds of fuel from tankers to coalition jets (predominantly to UAE aircraft, according to official data). Today, neither the Pentagon nor the State Department can say whether it is tracking civilian harm in the country even as it provides this crucial military backing.

On Sunday, Saudi officials labeled the bus bombing “a legitimate military action.” A Pentagon spokesperson has said that U.S. officials are pressing the Saudis “to do a thorough and complete investigation and release the results to the public.” The task of investigating the attack will fall to a coalition body known as the Joint Incidents Assessment Team, made up of officials from coalition member states. In addition to investigating incidents of concern, the group is meant to provide recommendations on avoiding harm to coalition-member militaries. However, the JIAT has no clear statutory authority — that is to say, it can’t make policy, and its recommendations don’t appear to have any legal binding force. At best, according to human-rights groups, the team has lacked consistency; at worst, they have said, it has failed to account for some of the conflict’s deadliest air strikes.

Still, when the JIAT was formed in 2016, with the assistance of Larry Lewis, then the State Department’s senior adviser on civilian harm, it was something of a novel entity in the Gulf, at least in its announced intentions. Lewis was perhaps the coalition’s sole American interlocutor focused explicitly on protecting civilians endangered by the Yemen campaign. As he saw it, there was an imbalance between the flow of weapons and support provided by Washington and its lack of oversight of a conflict it had accelerated. This is the mismatch that Lewis, with the State Department’s backing, said he tried to fix—initially with some success.

Last year, Lewis was pushed out of the State Department by the Trump administration during a larger purging of staff at Foggy Bottom. The State Department declined to comment on the circumstances of his exit, and did not say whether he had been replaced. Today, there is little to indicate catastrophes like last week’s will become less likely.

Among those who work on civilian protection, Lewis is well known. As an analyst at the federally funded research group CNA embedded with the military from 2004 to 2011, he worked closely with US officials in Iraq, and in Afghanistan he co-authored the Joint Civilian Casualty Study, part of a series of efforts that helped reduce deaths caused by international forces. In one key analysis, Lewis examined hundreds of civilian-casualty incidents in Afghanistan and found that half had resulted from civilians being misidentified as hostile forces. (Some of the seven major studies he has conducted since 2009 on civilian harm remain classified.) He worried that the lessons of Afghanistan would be lost in future wars, especially like the one in Yemen, where the extent of U.S. involvement and responsibility in the Saudi–Emirati war against the Houthis was unclear. (The United States operates a separate counterterror campaign in Yemen, often in collaboration with the Emiratis.)

By the time Lewis settled into his job at the State Department in August 2015, coalition pilots had already hit a staggering number of civilian targets in Yemen, including markets, gas stations, a teachers’ union meeting, and various residential areas. By the end of the month, the United Nations, drawing on cases it could reasonably verify, conservatively reported more than 2,100 civilian deaths in Yemen since March—the majority resulting from coalition strikes. At least some of the civilian deaths likely stemmed from the coalition’s inexperience in waging such a massive air war—the U.S.-led anti-isis air campaign has itself killed thousands. There was also a sense that the coalition members didn’t seem to care very much about protecting civilians. Washington’s “targeting assistance” didn’t seem to be doing much to help reduce civilian harm.

In September 2015, the coalition bombed a wedding party in southwestern Yemen, killing dozens. One guest later told me that survivors could only find “small, small pieces” of their loved ones. (There are countless stories like this today.) Lewis’s superiors sent him to the air-operations center in Riyadh, where he met with more than two dozen officers and several generals. The air war was “ugly,” as he put it, but he wasn’t sure if the Saudis had reflected on the toll, or taken steps to staunch the bloodshed. “I did different presentations, talking about how civilian casualties can happen, including some U.S. examples [from U.S. interventions in Afghanistan, for instance], and ways to learn, and adapt and change,” Lewis told me. “One person raised their hand and said, ‘So you’re telling us we are talking about accidents—you are talking about times when you didn’t mean to but something happened?’ And they were like, ‘Oh, we’ve definitely done those.’” Lewis realized that the coalition had “never really admitted to anyone in the United States that these things were happening,” he recalled. “Once we had that sort of ‘Ah’ moment, they started telling about incidents. The U.S. advisers’ jaws dropped at how forthright they were.”

Lewis wanted to teach principles like operational patience—waiting for a target to move out of a populated area, for instance—and how to gauge the risk to civilians in strikes on buildings and residential compounds. He stressed the importance of avoiding targets on no-strike lists, including ones provided by Americans, and specifically during “dynamic strikes”—those that are not preplanned, during which coordination might be more difficult. He left after a week; when he returned in December, Saudi personnel showed him list of targets they claimed to have not hit — encouraging stuff, but still only anecdotal signs. Lewis, who holds a doctorate in chemistry, needed data.

To test what was really happening on the ground, Lewis, in his capacity as a State Department adviser, improvised a system to track the campaign’s levels of civilian harm—essentially, a database populated with information from open-source reporting as well as operational data he was fed informally by parts of the U.S. military, including the types of strikes, their circumstances, and the targets hit. If an incident was blamed on the coalition, he tried to match it with official coalition flight records he had managed to obtain through U.S. military sources with access to this data. While the U.S. joint-planning cell in Saudi Arabia was supportive of the effort, Lewis told me, he still had to build it from scratch. No one in the military was studying civilian harm from the Saudi-led coalition campaign. Civilian protection was a blind spot.