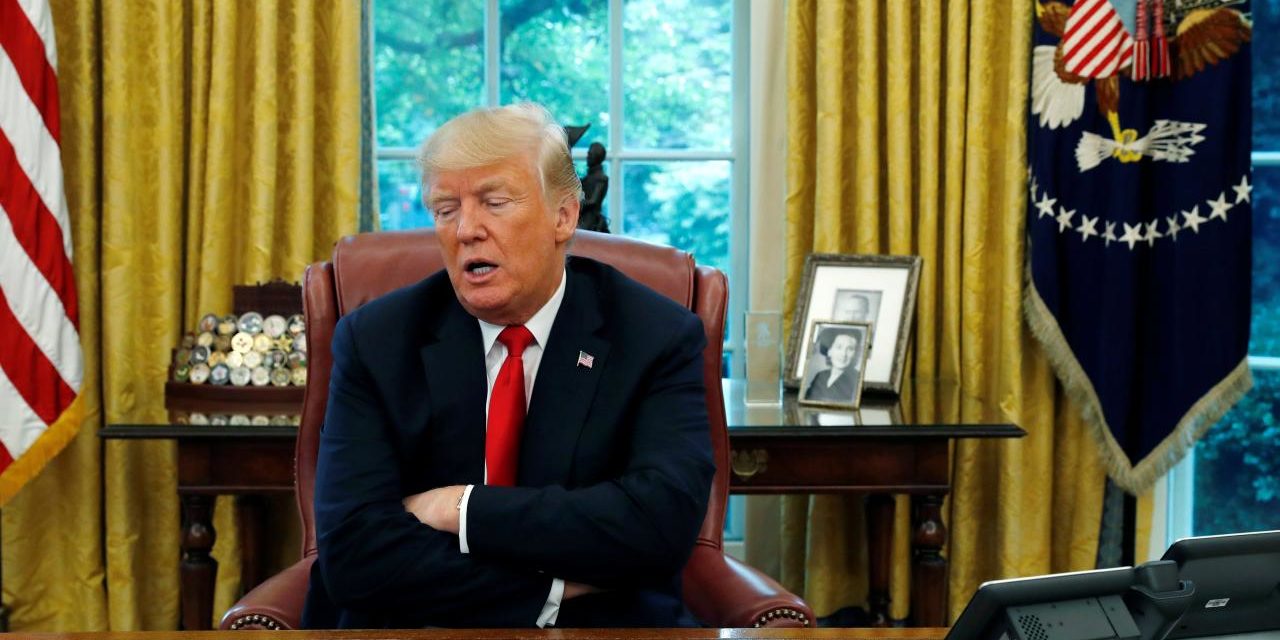 Unsettled by the advance of the Trump-Russia investigation, Donald Trump spent Monday lashing out at Special Counsel Robert Mueller and current and former US officials on Monday.

Trump began the day by tipping off his anger that White House lawyer Don McGahn had been interviewed for 30 hours, in at least three sessions, by Mueller’s team. Repeating his lie that the investigators are all Democrats, he derided the Special Counsel:

Disgraced and discredited Bob Mueller and his whole group of Angry Democrat Thugs spent over 30 hours with the White House Councel, only with my approval, for purposes of transparency. Anybody needing that much time when they know there is no Russian Collusion is just someone….

….looking for trouble. They are enjoying ruining people’s lives and REFUSE to look at the real corruption on the Democrat side – the lies, the firings, the deleted Emails and soooo much more! Mueller’s Angry Dems are looking to impact the election. They are a National Disgrace!

Two more sources “familiar with Trump’s thinking” said that he has been unsettled by the extent of McGahn’s testimony, revealed by The New York Times on Saturday.

Multiple sources said over the weekend that Trump had falsely assumed that McGahn would simply defend every Trump action, but that the White House counsel was concerned about protecting the Presidency and not the man holding the office — and that McGahn also wanted to avoid being scapegoated by Trump over possible obstruction of justice.

Those close to Trump say he was agitated through the weekend at his New Jersey golf resort, believing the revelation made him look weak.

On Twitter, Trump came close to acknowledging that he had obstructed justice, albeit in a justified attempt to halt Mueller’s investigation:

Where’s the Collusion? They made up a phony crime called Collusion, and when there was no Collusion they say there was Obstruction (of a phony crime that never existed). If you FIGHT BACK or say anything bad about the Rigged Witch Hunt, they scream Obstruction!

NEW: More than 175 former U.S. intelligence community and national security officials have added their names to the list of those deeply concerned by the politicization of security clearances. https://t.co/D1nuOWDetj pic.twitter.com/t6A4oEVK9r

Where’s the Collusion? They made up a phony crime called Collusion, and when there was no Collusion they say there was Obstruction (of a phony crime that never existed). If you FIGHT BACK or say anything bad about the Rigged Witch Hunt, they scream Obstruction!

Sessions has angered Trump by not reversing his recusal from the Trump-Russia inquiry. In March 2017, the Attorney General had to step aside because of his contacts, as a senior Trump advisor during the 2016 campaign, with Russian Ambassador Sergey Kislyak.

Trump wants Sessions to oversee the investigation to pressure and possibly fire Mueller.

“I Could Run the Investigation

In an interview with Reuters, Trump echoed the line of his lawyers that he cannot be interviewed by Mueller — because Trump is likely to incriminate himself with false statements.

Trump spoke of the “perjury trap”, repeating the example for his lead attorney Rudy Giuliani of Trump’s firing of FBI Director James Comey in May 2017, trying to quash the Russia investigation:

So if I say something and [Comey] says something, and it’s my word against his, and he’s best friends with Mueller, so Mueller might say: ‘Well, I believe Comey,’ and even if I’m telling the truth, that makes me a liar. That’s no good.

Trump said he had the option of taking over the inquiry, even though the move is likely to be unconstitutional:

I can go in, and I could do whatever — I could run it if I want. But I decided to stay out.