“They Were So Excited”: Yemen’s Schoolboys Killed by Saudi Airstrike 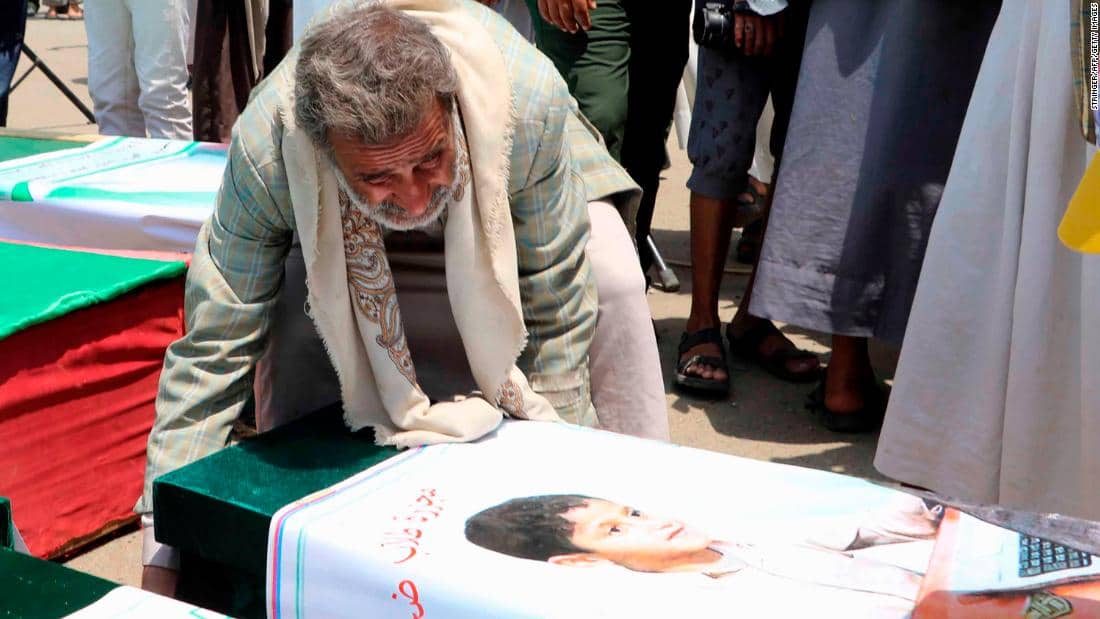 Writing for CNN, Nima Elbagir, Salma Abdelaziz, Sheena McKenzie, and Waffa Munayyer report on the latest mass killing in a Yemeni civil war in which more than 10,000 civilians have been slain, many of them by Saudi-led airstrikes:

For a group of boys in northern Yemen, Thursday was supposed to be a celebration — a much-anticipated field trip marking their graduation from summer school.

A video taken by one of the boys shows the classmates jostling and yelling on a packed school bus, clearly excited for the day ahead.

A parent outside the window waves goodbye to their child.

Within hours the boy who took the video, along with most of his classmates, would be dead — killed after a Saudi-led coalition airstrike hit their school bus.

Neighboring Saudi Arabia has been leading a coalition of Gulf states against Houthi rebels in northern Yemen since 2015, after the Iran-backed rebels drove out the pro-Saudi and US-backed government.

Killed on a Schoolbus

The children, reportedly ages 6 to 11, had been on a field trip to a graveyard for rebels, one of the few green spaces left in the northern Saada governate.

“Because of the war, most of the parks and gardens are destroyed,” explained the boys’ 40-year-old teacher, Yahya Hussein. “The nicest areas are the martyr’s shrines and mosques,” he told CNN.

“They were so excited about the field trip,” Hussein said of the outing, which was to mark the end of the boys’ two-month religious summer school. “It’s all they had been talking about for the last couple of days.”

In the video, filmed by schoolboy Osama Zeid al-Homran, the classmates are shown reciting verses from the Qur’an. The moment the lesson is over, the children race into the graveyard to play chase.

Zeid can be heard shouting to his friends, “Wait! Let’s take a picture!”

Later in the day, after the boys returned to the school bus, tragedy struck.

Hussein had been late to the field trip and was parking his car a short distance from the bus when the blast came.

“I heard a loud explosion and there was dust and smoke everywhere,” he said. “The scene can’t be described — there was body parts and blood everywhere.”

“These were the children that were laughing, playing, acting very excited just a couple of days ago about their field trip. And now they were just mutilated corpses,” he said.

“I was frozen,” said the father of three. “I just started screaming, ‘Oh people, oh world — these are just children.'”

Of the 51 people who died in the airstrike, 40 were children, Houthi Health Minister Taha al-Mutawakil said during a news conference Friday. He added that of the 79 people wounded, 56 were children.

Graphic footage of the immediate aftermath of the strike, broadcast by Houthi media, shows the children’s charred bodies under the blown-up bus. In one video, a Yemeni father spots his son’s corpse partially covered by a blue tarpaulin in the back of a pickup truck.

Houthi TV network Al Masirah reported that one of the first medics on the scene, Hussein Hussein Tayeb, found that his son was one of the dead.

“As soon as I arrived with others wanting to help out, we figured we had to quickly nurse the wounded because there was chaos — people were running over bodies and shouting,” he said.

“As I was nursing people, I lifted a body and found that it was Ahmed’s face. I carried him and hugged him — he was my son.”

On Monday morning hundreds of mourners gathered for a mass funeral for the boys, their small caskets carried through the city of Saada before being loaded onto pickup trucks.

Alongside the caskets stood giant placards bearing the bloodied faces of the children in the aftermath of the attack. Other signs said “America killed the children of Yemen.”

The procession, organized by Houthi rebels, was one of several planned to take place across Yemen on Monday.

Abdel-Ilah Mohammad, the father of 7-year-old victim Mohammad Abdel-Ilah, told CNN that his son had been so excited for the school trip that he got up at 6 a.m.

“We never expected this to happen,” he said. “He walked out of the door with his white clothes. He put on perfume and combed his hair before he left; he didn’t need to — he was a handsome boy. He did not know what was coming for him.”

US Defense Secretary James Mattis said Sunday that, while he backed the US State Department’s calls for the Saudi-led coalition to investigate the strike, he is sending a general to help with inquiries.

“I have dispatched a three-star general into Riyadh to look into what happened here and if there is anything we can do to preclude this in the future,” Mattis said.

The state-run Saudi Press Agency reported Friday that the Saudi-led coalition had opened an investigation into the attack.

Saudi Arabia denies targeting civilians and defended the incident on Thursday as a “legitimate military operation” and a retaliatory response to a Houthi ballistic missile that targeted the kingdom’s Jizan province the day before.

Coalition spokesman Col. Turki al-Malki told CNN the airstrike that hit the bus was aimed at a “legitimate target”.

“No, this is not children in the bus,” he said. “We do have high standard measures for targeting.”

UN Secretary-General António Guterres condemned the attack and called for “an independent and prompt investigation” into the strike.

Guterres said in a statement that all parties must “respect their obligations under international humanitarian law, in particular the fundamental rules of distinction, proportionality and precautions in attack.”

The war in Yemen is now the world’s worst humanitarian crisis, with more than 22 million people — three-quarters of the population — in desperate need of aid and protection, according to the United Nations.

More than 10,000 civilians have died and 40,000 have been wounded in the war, which reportedly has left 15 million Yemenis without access to clean water.