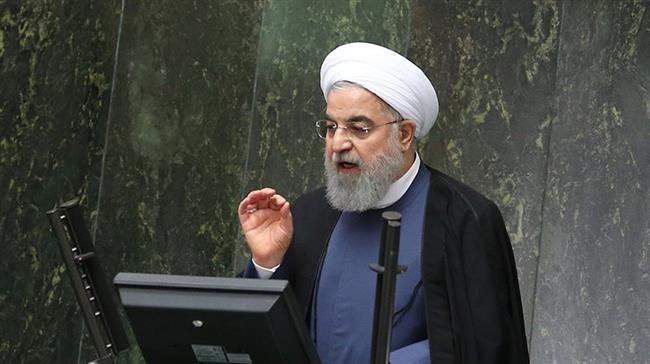 Some Iranian news agencies said the case will now be referred to the judiciary, but Parliamentary spokesman Behrouz Nemati said there must be further discussions.

In line with his toughened stance against Washington, which had bought him some political space, Rouhani focused on US sanctions in answers about unemployment, slow economic growth, currency crisis, cross-border smuggling, and the lack of access by Iranian banks to global financial services.

“I want to assure the Iranian nation that we will not allow the US plot against the Islamic Republic to succeed,” Rouhani said. “We will not let this bunch of anti-Iranians in the White House be able to plot against us.”

But only the answer on banks satisfied MPs.

Iran’s President Hassan Rouhani is in Parliament on Tuesday, summoned to answer questions about his Government’s handling of the economic crisis.

It is the first time that Rouhani has been interrogated by the Majlis since he assumed the Presidency in 2013. His office had resisted the summons, but has finally given way as two Ministers were dismissed by MPs.

In his opening responses, the President sought to link himself firmly to the Supreme Leader, “I hope that I can accurately follow the recommendations that [he] gave me about this meeting.”

He acknowledged the concerns of Iranians:

We must speak with the people in a correct so they are convinced that Iran’s problems will pass in a few months….We must say to the Iranian people that we will not let the US conspiracy win.

Labour Minister Ali Rabiei was impeached and removed two weeks ago, and Economy Minister Masoud Karbasian fell by a 137-121 vote after questioning on Sunday.

Rouhani has been under pressure from hardliners as long-term internal problems have been accentuated by expanding US sanctions, following Donald Trump’s withdrawal of the US in May from the 2015 nuclear deal. After a 60% fall in the value of the Iranian currency v. the US dollar, the President removed the head of the Central Bank last month.

Rouhani also bought himself some space in July by toughening his rhetoric against Washington. But Iranian efforts to secure trade and investment links with other countries, particularly in Europe, have struggled with the threat of US punishment of foreign firms and the approach of American sanctions on Tehran’s energy and financial sectors from November 5.

Following Karbasian’s dismissal on Sunday, the rial slipped to 10,750:1 v. the dollar. It stood at 45,000:1 in January — already a historic low — before its slide. Production, investment, and trade are all under pressure, and inflation, which had brought down from more than 40% to single digits, is rising again.

On Monday, Rouhani spoke by phone with French President Emmanuel Macron, seeking the salvation of the nuclear deal after the US withdrawal and sanctions escalation.

Iran has lived up to all its obligations stated in the Joint Comprehensive Plan of Action. With regard to US’ unilateral withdrawal from the deal, the other parties to it are expected to boost efforts and transparency for saving the deal.

He then threatened Iran’s own departure and other vague steps, “Iran wants the nuclear deal to survive, but in the meantime, if securing financial and monetary channels, oil, insurance and transportation are not in Europe’s future plans, it will consider other measures.”