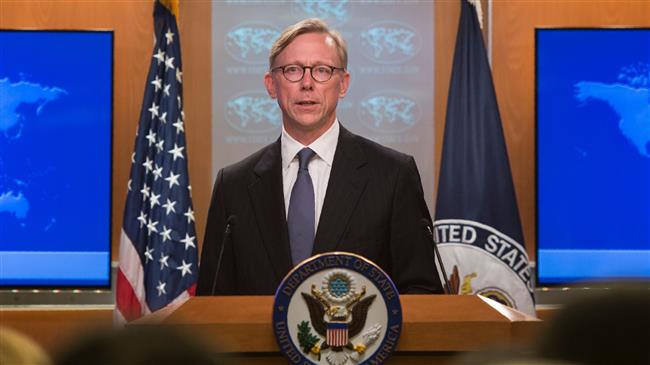 Split widens between Washington and Europe over US sanctions

The US has denounced a European Union support package of €18 million ($20.7 million) to help Tehran weather its economic crisis and US sanctions.

Brian Hook (pictured), the newly-named coordinator of the Iran Action Group, issued the criticism on Friday, a day after the the European Commission approved the development aid.

Hook said the step sent “the wrong message at the wrong time”: “The United States and the European Union should be working together instead to find lasting solutions that truly support Iran’s people and end the regime’s threats to regional and global stability.”

The EU’s Federica Mogherini announced the Commission’s decision on Thursday. She reaffirmed Europe’s commitment to joint efforts with Iran to keep the 2015 nuclear deal alive, despite Donald Trump’s withdrawal of the US from the agreement in May.

The EU is planning a total package of €50 million ($58.2 million) for Iran to “address key economic and social challenges”. The assistance includes support to high-potential small- and medium-sized enterprises (SMEs), technical assistance to Iran’s Trade Promotion Organisation, and aid for environmental and drug harm reduction programs.

The US is planning comprehensive sanctions on Iran by November 5. It has already implemented the first stage, including measures against Iranian imports and the auto industry, and will impose the second stage on Iran’s energy and financial sectors.

Washington has said that it can heavily fine any European company with US links which continues business with Iran.

The EU has pledged to shield firms from Americna punishment, but is struggling to provide guarantees for larger firms. As a result, many have scaled back or suspended services, trade, and investment with Iran.

Former Tehran Mayor Sentenced for Criticism of Iran in Syria

Gholamhossein Karbaschi, the former Mayor of Tehran, has been given a one-year prison sentence for criticism of Iran’s involvement in the Syrian conflict.

An appeals court upheld the sentence over Karbaschi’s comments at an April 2017 rally in Isfahan, supporting the Presidential campaign of Hassan Rouhani. Karbaschi said:

Should we be proud of this religious fervor in the name of defending things like, I don’t know, the holy shrines [in Syra]?…Listen! We also want to see peace in Syria, Lebanon, and Yemen. We want to defend the oppressed and strengthen the Shia populations there. But can we achieve that just by giving money and weapons and killing and pounding?

The head of the state-funded Iran’s Martyrs Foundation announced in May 2018 that 2,100 Iranians have been killed in the Syrian conflict. Some groups say the number is far higher.

Karbaschi said in an interview in May 2018 about his prosecution:

These absolute lies are basically political games before the elections. In Iran, no one dares to affront martyrs and fighters.

This is basically media hype. They say I said something insulting, but that’s a complete lie.

Karbaschi, 64, was the mayor of Tehran from 1988 to 1998. During his last yearm he was charged with financial corruption and sentenced to three years in prison. He served two years before he was pardoned by the Supreme Leader in January 2000.