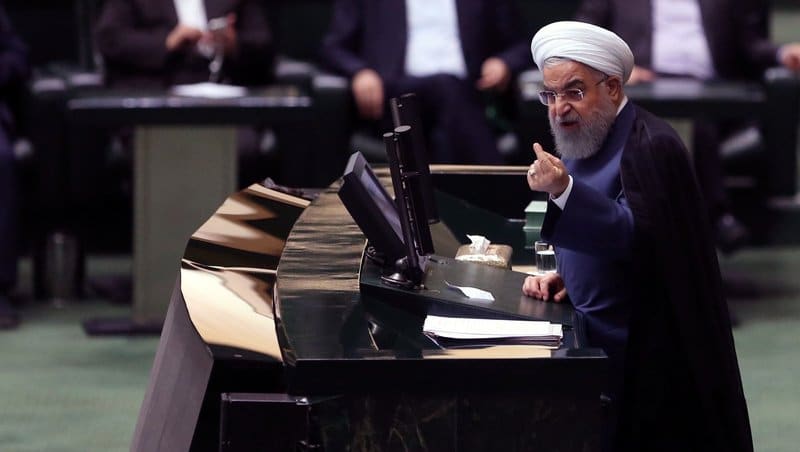 UPDATE 1700 GMT: The Supreme Leader has closed off the Government’s talks with European countries, seeking trade and investment links to prop up Iran’s economy amid US sanctions.

“There is no problem with negotiations and keeping contact with the Europeans, but you should give up hope on them over economic issues or the nuclear deal,” Ayatollah Khamenei said has he met the Cabinet.

Khamenei threatened Tehran’s withdrawal from the 2015 nuclear agreement, following the Trump Administration’s departure in May with the order for comprehensive sanctions from November.

There was a bit of relief for Rouhani, a day after he was censured by MPs. The Supreme Leader put the emphasis on unity against US pressure, and said publicity of differences within the regime would only make the nation more unhappy.

Khamenei told the Cabinet to work “day and night” to solve the economic crisis.

Iran’s MPs have censured Hassan Rouhani, but the extent of damage to the President’s position is unclear.

After Rouhani answered questions for an hour about the economic crisis, legislators rejected his explanations on four of five points: unemployment, slow economic growth, currency crisis, and cross-border smuggling.

The only area where MPs accepted the President’s arguments was the lack of access by Iranian banks to global financial services.

But it is uncertain if the rejection is merely a show of displeasure, or whether disciplinary steps — up to removal of the President — will be taken.

Some Iranian news agencies said the case will now be referred to the judiciary, but Parliamentary spokesman Behrouz Nemati said there must be further discussions.

The Supreme Leader’s office was silent about the consequences. Ayatollah Khamenei has put pressure on Rouhani at times during the crisis, but stepped back last month when Rouhani toughened his rhetoric against Washington and US sanctions.

I want to assure the Iranian nation that we will not allow the US plot against the Islamic Republic to succeed. We will not let this bunch of anti-Iranians in the White House be able to plot against us.

But he was unsuccessful, as a series of MPs criticized Government actions and mismanagement.

The economy is at a critical point because of a combination of long-term internal problems and US sanctions. Production, investment, and trade are all under pressure, and inflation, which had brought down from more than 40% to single digits, is rising again.

In late July, amid a 60% fall in the value of the Iranian currency, Rouhani replaced the head of the Central Bank, and the deputy head has been arrested as the regime blames “enemies”.

The President’s call for “unity” has been heeded on one front: the English-language sites of Iran’s State and semi-official news outlets are not mentioning the censure, headlining, “Rouhani Answers Economic Questions in Parliament“.

France to Its Diplomats: No Non-Urgent Travel to Iran

An internal memorandum cited a foiled bomb plot in Paris — near a rally held by the National Committee of Resistance of Iran, attended by Donald Trump’s lawyer Rudy Giuliani — and a tougher Iranian attitude towards France.

“The behaviour of the Iranian authorities suggests a hardening of their position vis-a-vis our country, as well as some of our allies,” Maurice Gourdault-Montagne, the Foreign Ministry Secretary General wrote in a notice dated August 20. “Given the known security risks…all departmental officers, whether from headquarters or (overseas) posts, are required to defer until further notice, except for urgent work, any travel plans in Iran.”

The instructions were relayed to officials in other government departments.

Twitter is banned in Iran, but former President Mahmoud Ahmadinejad is keen to promote the social media application.

Ahmadinejad, who led the Government from 2005 to 2013 and still has ambitions to regain the office, tweeted on Tuesday:

Had a busy day today . But I always make time for #Twitter pic.twitter.com/YDQ63xy6bk

His motive is unclear: whether it was just a personal statement, a chiding of the Government for failing to overcome hardline resistance to allow the service inside Iran, or even a jab at those like the judiciary and Supreme Leader’s office who favor the continued ban.