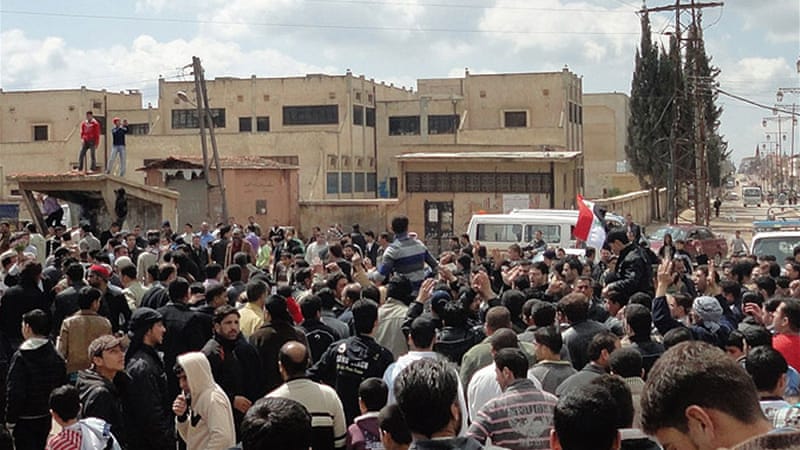 Pro-Assad forces are besieging the city of Daraa, where Syria’s uprising began in March 2011 with peaceful protests against regime repression and abuses.

Last week rebels agreed a surrender deal with Russian officers for much of Daraa Province in southern Syria, following a three-week offensive enabled by Russian airstrikes. However, the Assad regime does not appear content with just allowing fighters to give up their heavy weapons.

Abu Shaima, a spokesman for the opposition in Daraa city, said several thousand people are surrounded after pro-Assad units pushed into a base west of the city without a fight: “The army and its militias have besieged Daraa completely.”

He indicated that the regime is trying to prevent men from being able to move to opposition-held Idlib Province in northwest Syria, “There are fighters who want to go to Idlib but this was rejected after we were besieged.”

The Assad regime may also be unwilling to honor a provision in the deal, as described by rebels, which does not allow the army to move into the city and allows local forces, including former opposition fighters, under the oversight of Russian military police.

An opposition negotiator said talks with Russian officers were planned on Monday: “We will work with the Russians on setting up a local force from the inhabitants that will prevent the entry of the army to Deraa with Russian guarantees.”

Meanwhile, the pro-Assad forces are establishing their hold over the area near Jordan, now occupying all the border — including the vital Nassib crossing — except for a pocket held by an ISIS-affiliated group in western Daraa Province.

Residents of Daraa came out on the streets in March 2011 about teenagers were detained and abused for graffiti that offended regime officials. Security forces responded with more arrests and firing on the protests, feeding the spread of demonstrations across Syria.