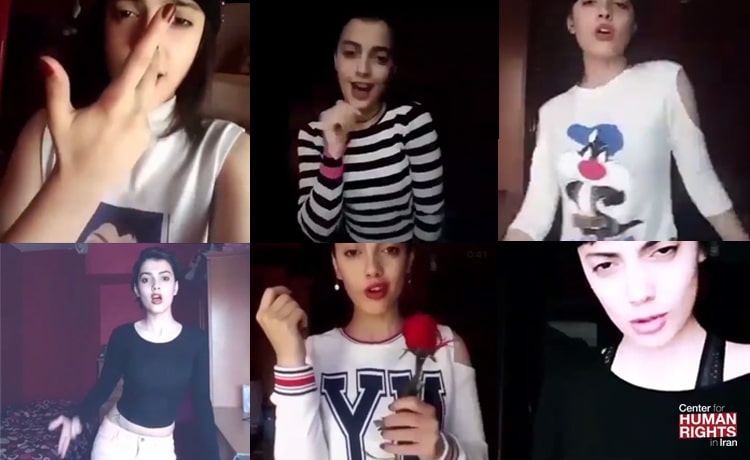 Iran’s authorities have forced a teenage girl to “confess” on State TV to the “crime” of posting an Instagram video of herself dancing.

Maedeh Hojabri, 18, and other social media users were arrested at an unknown date. Her case was given prominence on Saturday when she was shown on broadcaster IRIB, crying and saying that the videos for her followers were not directed by anyone.

Political prosecutions are sometimes supported in Iran through pressure on detainees to “confess” before TV camera.

No charges have been announced in Hojabri’s case. However, the head of Tehran’s cyber-police Touraj Kazemi said on Saturday that people who post “indecent” material online will be pursued for committing crimes against national security.

Zahra Rahnavard, the opposition leader who has been under strict house arrest since February 2011, was quoted on the opposition’s Kalameh site:

The head of the IRIB should apologize to the shared conscience of the people of Iran. In its dreadful interview, the IRIB displayed how it shredded the spirit of a young girl. For how long do we have to witness such behavior against humanity and youthfulness?

Her name is Maeade Mahi. Recently she got arrested just because of uploading her dancing videos on her Instagram. If you are a woman in Iran and you dance or sing or show your hair then you are a criminal. If you want to enjoy your true self, you have to brake the laws every day. pic.twitter.com/0eIq5ld5x6

After his election in 2013, President Hassan Rouhani attempted to open up political and social space, saying that the Internet and modern communications are essential for the development of Iran. However, his efforts were quickly contained by hardliners who have continued restrictions on social activity, including by women.

Instagram is the only widely used social media application that is not banned, and there are periodic detentions of social media users. Authorities have clamped down on women who have demonstrated by waving hijab, the compulsory head covering, on the end of poles.

In September 2014, seven young people were sentenced to prison time and flogging, later reduced upon appeal, for producing a video of themselves dancing to Pharrell Williams’ “Happy” at different locations in Tehran.

Iranian TV has broadcast a new round of forced confessions. This time the so-called criminals are dancers who dared post videos on Instagram. Since when is dancing a crime? #citizenjournalism pic.twitter.com/Qqj0yHaVvC