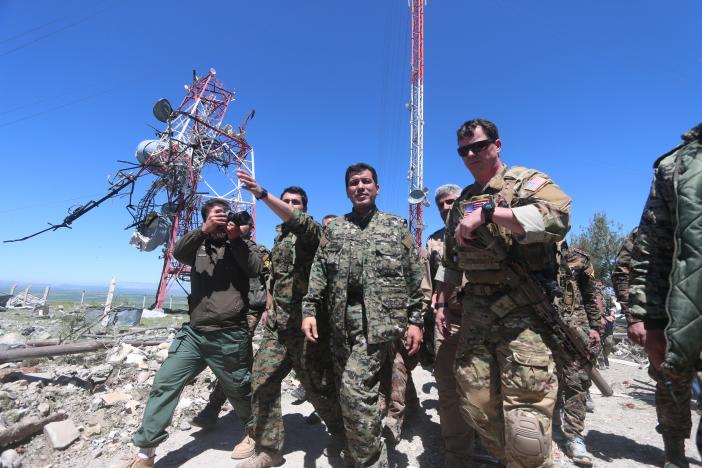 The US-backed, Kurdish-led Syrian Democratic Forces have pushed back Bashar al-Assad’s threat to attack them as his regime attempts to regain control of all of Syria.

Created in autumn 2015, the SDF now holds much of northern and eastern Syria, including the city of Raqqa and the Kobani and Cezire cantons.

Assad said in a Thursday promotion by the Russian State outlet RT, that the US should learn the lesson of Iraq and withdraw. He continued:

The only problem left in Syria is the SDF. We’re going to deal with it with two options.

The first one: we started now opening doors for negotiations. Because the majority of them are Syrians, supposedly, they like their country, they don’t like to be puppets to any foreigners. We have one option, to live with each other as Syrians.

If not, we’re going to resort…to liberating those areas by force.

SDF spokesperson Kino Gabriel responded, “Any military solution, as far as the SDF is concerned, will lead to more losses and destruction and difficulties for the Syrian people.”

The SDF wants a “democratic system based on diversity, equality, freedom and justice” for all ethnic and religious groups in Syria, he said.

Set up by RT interviewer Murad Gazdiev, Assad put out his standard proclamation that he would retake the country, but his regime faces de facto partition with Kurdish control of about one-third of Syria. Meanwhile, the opposition has much of the northwest — including almost all of Idlib Province and also holds a southern area along the Jordanian border and near the Israeli-occupied Golan Heights.

Idlib as well as parts of neighboring northern Hama and western Aleppo Province is under Turkish protection, while Israel has threatened intervention if Hezbollah and Iranian-led militia are involved in any regime attempt to recapture the south.

The regime’s essential ally Russia is pushing for American withdrawal as part of a political path for regime control, but the US also knocked back Assad’s comments.

The S-led global coalition remains committed to focusing on the defeat-ISIS mission in Syria and does not seek to fight the government of Syria or Iran, or Iranian-supported groups, in Syria.

However, as we have said in the past, if attacked we will not hesitate to use necessary and proportionate force to defend US, coalition, or partner forces engaged in operations to defeat ISIS.