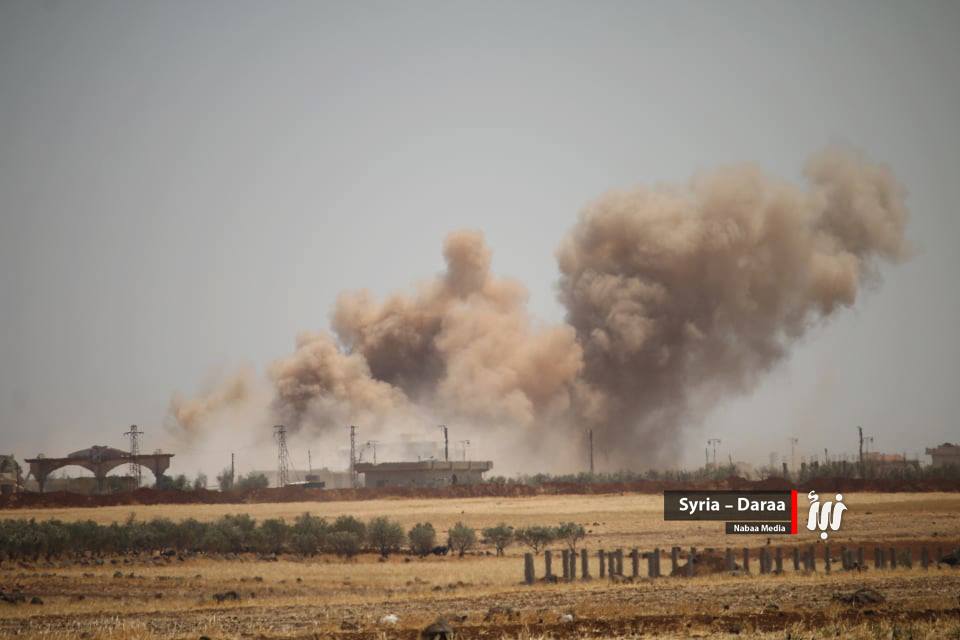 A pro-Assad offensive to retake all of Daraa city in southern Syria?

UPDATE 0715 GMT: The international medical organization UOSSM has confirmed that one of its medical facilities was struck in pro-Assad attacks on eastern Daraa Province:

One of our PHC centres in Busra Al Harir, #Daraa was hit by a direct airstrike and suffered extensive damages. To be mentioned, although #Daraa is part of the de-escalation zones still the past days witnessed a massive military operation including airstrikes#NotATarget @UOSSM

Pro-Assad outlets are claiming the start of an assault to recapture Daraa city, where Syria’s uprising began in March 2011.

The outlets said that the regime’s elite 4th Mechanized Division fired about 40 missiles into the Old City section of Daraa, in southern Syria on the Jordanian border, about 2 am local time. One pro-Assad blog, al-Masdar, cited a regime military official that a ground assault would begin soon to take the southern half of the city.

While the Syrian opposition has held much of Daraa Province since 2012, the city has been divided between rebels and pro-Assad forces.

Rebel and pro-opposition sites have not confirmed this morning’s attack.

One of our PHC centres in Busra Al Harir, #Daraa was hit by a direct airstrike and suffered extensive damages. To be mentioned, although #Daraa is part of the de-escalation zones still the past days witnessed a massive military operation including airstrikes#NotATarget @UOSSM

Pro-Assad forces began their assault on Daraa Province on Tuesday with shelling and bombing. So far ground operations have made no confirmed significant advances, capturing only the villages of Shakoura and Jaddel in eastern Daraa Province.

S. #Syria: amidst conflicting reports about control of Jaddel in #Lajat, evidence shows village was still/again Regime-held today at the end of afternoon. https://t.co/BQ8MfPnC6E pic.twitter.com/Pw1knL8Hqf

At least 11,000 people have fled the area since Tuesday, prompting the UN to call for a halt in the pro-Assad attacks.

Israel has warned that there must be no Hezbollah or Iranian-led units in any offensive in Daraa and Quneitra Provinces, near the Israeli-occupied Golan Heights. After meetings with the Israelis, Russia has publicly called for “non-Syrian forces” to leave the area,.

However, there were reports on Saturday that Russia had joined regime forces in airstrikes on the main area of fighting, near Lajat and Busra al-Harir in eastern Daraa Province. Any Russian attacks would violate a “de-escalation zone” declared by the US and Moscow last July — but Russia had broken agreements for zones in its support of other pro-Assad reoccupations, including East Ghouta near Damascus and parts of northwest Syria.

The US has publicly warned of “firm and appropriate measures” against any pro-Assad assault; however, over the weekend American officials told Southern Front rebels, “You should not base your decision on the assumption or expectation of military intervention by us.”

See Syria Daily, June 24: US to Opposition in South — “You’re on Your Own” v. Pro-Assad Offensive