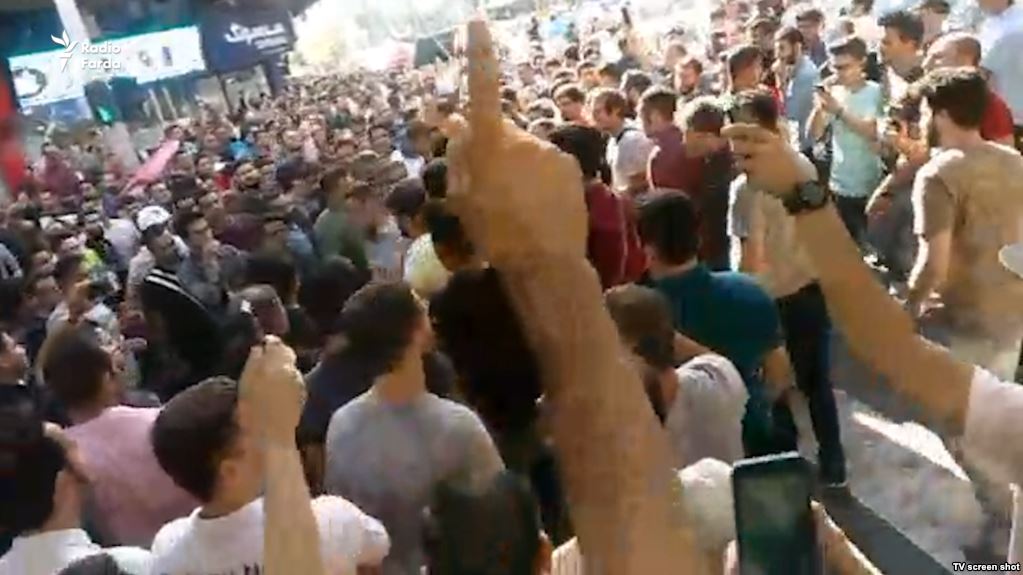 UPDATE 1600 GMT: The scale of the march through Tehran today:

Chants for the Iranian monarchy, toppled by the 1979 Islamic Revolution, with support of the late Shah’s son, “Reza Pahlavi, bless your soul”:

UPDATE 1530 GMT: Police have fired tear gas on protesters in front of the Parliament building.

Thousands reportedly joined marchers coming from the Tehran Bazaar, where protest began in the morning. They chanted, “Don’t fear, don’t fear, we are all together.”

UPDATE 1330 GMT: There were protests in the Tehran Bazaar on Monday morning over the currency crisis and the economic situation.

Store owners at the capital main markets closed their shops. Videos showed demonstrators chanting slogans against rising prices and Iran’s involvement in the Syrian civil war: “Leave Syria alone, think of our own”.

The crowd chided those who did not shut down trading, “Cowards! Cowards!”

The Central Bank tried to check the slide in the currency by announcing a “second forex market”, with alternative rates of exchange for importers.

Central Bank Governor Valiollah Seif said, “The rate for importing essential commodities including medicine will be 42,000 rials [the official “unified” rate announced by the Government in March], while importers and exporters will have to agree on the rate for importing non-essential goods.”

Iranian Students News Agency, close to the Rouhani administration, said a third rate of exchange between 60,000 to 65,000 rials per US dollar will be announced soon.

English-language State media are finally reporting the demonstrations, with the Secretary General of the Islamic Society of Guilds and the Bazaar insisting that calm has returned.

Ahmad Karimi Esfahani said protesters “chanted economic slogans in protest at the existing conditions, as a result of which a large group of other businesses were shut down on security grounds and to prevent possible robberies”.

But Esfahani pointed to continued dissatisfaction with the Government, saying it has been “completely ineffective” over economic issues: “We have repeatedly warned the government that it should strengthen its economic team but now we have come to a conclusion that this team must change.”

He added that the demonstration must be seen as in line with regulations of the Islamic establishment and should not be interpreted as a move against the Islamic Revolution”.

The Government tried to shift blame on Sunday, with 1st Vice President Eshaq Jahangiri telling MPs that all Iranians must unite against Washington: “The Americans…have begun a serious war against our country, thinking they can succeed in crippling our economy so that Iran, in the words of the US president, is forced back to the negotiating table.”

The Tehran Prosecutor General also blamed protests on a US plot.

“[US officials] want to create fear in the hearts of the (Iranian) people by a psychological war and increase economic pressure through…imposing sanctions against banks,” Abbas Jafari Dowlatabadi said during a meeting with a number of Iranian judges.

Protests have broken out in Iran’s capital Tehran amid a collapse in the Iranian currency.

The Iranian Rial, already at a historic low level, has plummeted another 20% in two days, reaching the 90,000:1 mark vs. the US dollar. The currency has now lost more than half its value since January, shattering the previous floor of 45,000:1 against the dollar.

Sunday’s protests started in Tehran’s cell phone market, close to the foreign exchange area. Demonstrators urged store owners to shut down, given the sharp increase in price for handsets, and other people joined them as they moved into the street.

One report said protesters were marching toward Baharestan Square, where the Iranian Parliament is located, when the police stopped them and dispersed the crowd.

The Iranian Students News Agency reported the suspension of business by many foreign exchange traders. The market for gold coins was said to have stopped, as the price reached 32 million Rials, three times the level in March.

ISNA said the Central Bank is no longer putting foreign exchange into the market to try and limit the Rial’s devaluation.

The English-language sites of Iran’s State news agencies are still not making any reference to the currency situation.

Iran’s economy has long been under pressure because of mismanagement, corruption, and sanctions. The Rouhani Government hoped for a recovery since implementation of Iran’s nuclear deal with the 5+1 Powers (US, UK, France, Germany, Russia, and China) from January 2016, but the situation has now become critical with the catalyst of American withdrawal from the agreement, announced by Donald Trump on May 8, and the threat of expansive US sanctions against foreign companies trading and investing in the Islamic Republic.

Since March, Government measures have included higher interest rates on savings, a switch to the Euro as the official recording currency, arrests of unofficial currency traders, and unification of the official and open-market rates at 42,000:1. But the steps have only led to shortages of foreign currency, including the closure of exchange offices.

Sunday’s demonstration was the largest in Tehran since January’s nationwide demonstrations over economic and political conditions.