Syria Daily: Swap Deal for Removals Near Damascus and in Northwest 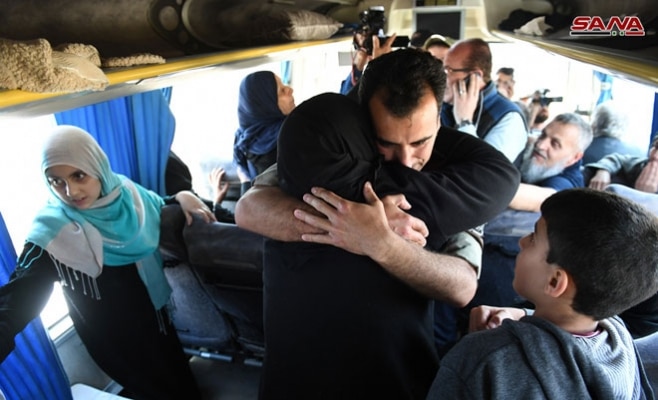 A deal pointing to partition?

The Assad regime and rebels have reached a swap deal, in which rebel fighters and families will leave an area south of Damascus while pro-Assad fighters and civilians will leave a regime enclave in opposition-held Idlib Province.

The agreement, brokered by Russia, was confirmed to cover Yalda, Babila, and Beit Sahm, which have been under the control of the Free Syrian Army.

Amid a two-week pro-Assad offensive trying to clear the Islamic State and the jihadist bloc Hay’at Tahrir al-Sham from Yarmouk camp and al-Hajar al-Aswad, just to the west of the rebel territory. While the attacks — including intense airstrikes — had chipped away at the ISIS and jihadist positions, they had failed to overrun the area.

Earlier this week a deal was reached for HTS fighters and families to leave for northwest Syria, isolating ISIS for a further pro-Assad assault.

Meanwhile, the latest deal could begin to resolve the position of the regime enclave of al-Fu’ah and Kafraya, surrounded since rebels took almost all of Idlib Province in spring 2015. About 1,500 pro-Assad militia and their family members are leaving, while about 80 civilians abducted by HTS are being released.

It was unclear if the removals in Idlib were a capitulation of the enclave. Some claims said that, while some pro-Assad militias were departing, others had refused to go.

A takeover of al-Fu’ah and Kafraya by rebels could reinforce a de facto partition of Syria, in which the opposition and Turkish forces hold much of the northwest — despite the Assad regime’s proclamation that it will recapture all of the country.

He said that thousands of civilians still live in Yalda, Babila, and Beit Sahm, and that about 400 civilians are still in Yarmouk, even though 3,500 have fled in the past week.

Before the Syrian uprising, Yarmouk was home to more than 200,000 people, most of them displaced Palestinians.

Russian warplanes have destroyed another hospital, this time in Kafrzita in northern Hama Province.

The building was damaged a year ago when a bomb struck a nearby mosque.

Russian and regime aircraft have been bombing northern Hama and northern Homs Provinces in the hopes of forcing surrender agreements.

The pro-Assad forces are also reportedly dropping munitions on farmland to burn crops.

N. #Hama: moment when #RuAF carried out an incendiary bombardment in field around #Lataminah, burning crops. Followed up by artillery strikes. https://t.co/NbKLtw98Px pic.twitter.com/Aq78KkbOe8

Today’s strikes were about 10 km from a Turkish observation post near Morek, part of a ring of posts hoping to establish a zone protected from pro-Assad ground assaults.

Civilian and military sources say the Free Syrian Army is giving the homes of Kurdish families, displaced by the Turkish-rebel offensive that took much of the Afrin canton in northwest Syria, to people displaced from East Ghouta near Damascus.

Khalid al-Hassan, pushed out by the two-month pro-Assad offensive that seized East Ghouta, arrived in Afrin in early April. He said he turned down the FSA offer of a house: “We are displaced from our homes, and are coming as guests to this region. We are not accepting these houses for free without the permission of their owners.”

But sources in Afrin said “dozens” of other East Ghouta families have moved into the vacant homes.

A Kurdish commander in the FSA, confirmed the accounts: “We, the Kurdish component [in the FSA], are trying to work against this with all our energy. But we are in the minority.”

More than 137,000 residents of Afrin were displaced by the offensive that began on January 20.

Journalist Muhammad Balou, who now lives in Iraqi Kurdistan, said he was told last week that a family from East Ghouta moved into his residence: “I worked many years to buy my apartment in Afrin, and even took out a loan. Now people have entered and begun living there. By what law, I don’t know.”